A couple of years ago, one of my Hawk chums asked me if fancied going to one of the Euro Championship qualifiers at Wembley. I said no, reasoning that if I was to go to the national stadium, I wanted to save my first time for the Hawks. Of course, my chums rightly scoffed, as the chances of a club of our size getting there are remote at best. FA Trophy or bust, really, and we’re not at the top level of clubs eligible to take part.

As we got to these Trophy semi-finals, it was all shaping up for me to be painted as some kind of oracle; a wizard-like sage dispelling wisdom from the tree-stump upon which I sit forever cross-legged. Instead, our local rivals Gosport are going to Wembley and I look like what I am, a bell-end keen to put a whimsical spin on the fact he can’t be arsed with watching the England football team these days. 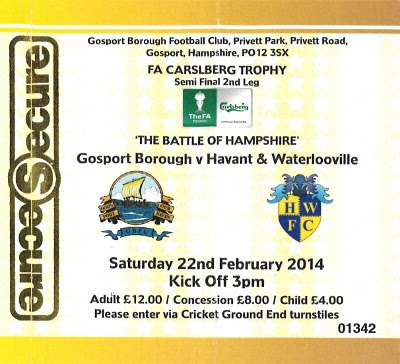 Of course, this is what will make this defeat hurt all the more, the fact we have been defeated by a club just down the road, covered by the same local newspaper and containing a number of old faces who will be delighted they’ve been able to put one over on the club that deemed them surplus to requirements. We gleefully handed over the divorce papers and cast them into the street without shoes; now they’ve snuck back in our house and cut the crotches out of every pair of trousers we own. 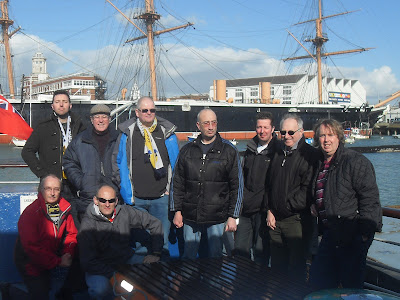 So, all we can do is stand by and now watch the Portsmouth News work themselves into a lather about something that could have been ours, but isn’t ours, for the next month. Gruuuuw. Losing to a club from the distant north would have been much easier to take, or at least a lot easier to ignore.

The disappointment amongst our support was palpable upon the final whistle; frustrated anger, distraught tears and bouncy-castle-at-the-end-of-a-child’s-party levels of deflation. As our collective trudged the two miles back to the Gosport/Portsmouth ferry, a journey very similar to the one that had been full of hope and opportunity not three hours previous [see photo above], we did our best to gee each other up, but when such a carrot is dangled, one cannot help but feel a little empty when the next door neighbour reaches over the fence, and snatches it away. Still, that was for Saturday; our duty now concerns the future. NEXT! 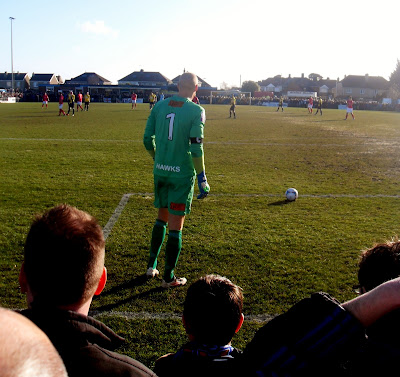 The key really is how we deal with the coming weeks, and that counts for fans as well as players. We all need to pick ourselves up and deal with this setback in a pro-active manner. There is still a Hampshire Senior Cup to be won, and play-offs to be challenged for. Let us not forget that we had just gone three months without defeat – that had to come to an end at some stage and it’s a shame it had to be at a game of this magnitude, but these things happen.

To say our players “didn’t want it enough” doesn’t sit well with me. Sometimes you might think a set of players might not care that much about winning the Hampshire Mug, but a chance for a semi-pro player to do their thing at Wembley? Of course they wanted it. So did Gosport. Gosport just went about their business a lot more effectively over the two legs. The things we usually do well, we didn’t do with any fluidity and I think the confidence eroded over the 180 minutes, while Gosport played above their current rock-bottom-of-the-league station. Tim Sills took his two opportunities here with great poacher’s instinct, although marking on both occasions was somewhat lax to say the least.

Fair play to them then, especially Sam Pearce, one of our old boys who took the time to applaud us after the game, and not in a gloating way. How to be gracious in victory in one easy step. Gosport keeper Nathan Ashmore, also once with us of course, took a different approach, allowing his annoyance to get the better of him and unleashed some choice Anglo-Saxon terminology in our direction. If I’d have been called variations on ‘cheating c**t’ by the less decorous members of our support network for most of the second half, I think I might have built up a head of steam myself, so I’m choosing to forgive this aberration, and wish him well for the final. 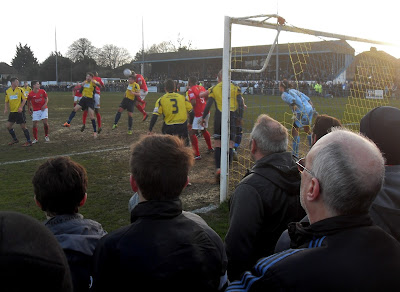 So what went wrong? Well, who knows? There’s been a lot of feeling amongst our supporters, that because they’re bottom of the league, because we battered them on Boxing Day, because we believe man-for-man in all positions our players are better, that we should easily beat the likes of Gosport. Of course, that’s not how cup ties work. Cup ties would punch you in the groin soon as look at you.

We know this, of course, from the other side, as cup ties can also drag you into a shop doorway for a very public display of, how can I put this, ‘heavy duty affection’. Indeed, while this was crushing (more so than when we lost at this same stage in 2003 to Tamworth, as the final was at Villa Park that year), it would be a great deal more crushing than if we’d never had our moment in the sun and, indeed, The Sun. To have beaten York, Notts County and Swansea, and scored two goals against Liverpool at Anfield, well, hardly any set of supporters at our level will get to experience that. We have. To have won the Wembley treasure as well might have made us feel a bit guilty, like winning all the prizes in a pub raffle and feeling duty bound to toss something back on the table for someone else to win.

That’s how I’m choosing to spin it – that we are magnanimously letting Gosport have some of the occasional PROPA FUN TIMES available in the non-League pot, cos we’ve had our turn and what not. Yep, foolish arrogance and condescension all the way, even in defeat, that’s my coping mechanism. It’s either think that or believe that Alex Pike superstitiously not touching the Trophy at the Fratton Park photocall was the difference between the two sides, or give credence to the fact his barrister mate had a dream predicting the exact scores of the two legs.

Alternatively of course, we could take the more upsettingly accurate and factual approach of crediting the notion that Gosport bested us over two legs. Good luck to them and our old boys for their big day out, as we haul ourselves up off the canvas and get ourselves together for the next big fight. As with Pat Sharp’s Fun House, there are STILL prizes to be won and, who knows, we could still have a whole lot of fun this season.

Behind us smoulders the wreckage; ahead of us rolls a long open road of possibility.

As brave faces go, this is braver than a blue painted Aussie in a skirt, long hair and a problem with authority. I wasn't there and I feel sick to the core of my being. Well done for being able to put this debacle into reasoned rhetoric. Let's just hope this doesn't come with an olympic sized hangover.