I am going to have to be more careful about what I write on here. Following my opening paragraph from our opening game at St Albans, which made mention of maestro Malc’s grandmaster guff, Malc has seemed to take this as some kind of tribute. Prior to kick-off at Chelmsford he made the suggestion that my recent regular attendance has been due mainly to my nasal enjoyment of his regular, cloudy gifts. While I might play along with this in person, I think I should make my position clear before my reputation gets a coprophilic monkey on its back.

My upturn in attendance of Hawk fixtures has, I like to think, more to do with the fact I no longer live 300 miles away from West Leigh Park (74 miles is much more manageable), rather than any deviant, perverted interest in sampling the noxious gasses that our Malc regularly squeezes from his fundament. There would be no tears before my bedtime if he was to push a cork up his hoop, let me tell you. Still, you’ll not find more committed a Hawk than our Malc, so we forgive him his trespasses.

Well, windypops aside, a lot has happened since that St Albans game, as those who also read Bin Man 87 will know but, it’s fair to say, that we didn’t start well. However we’ve picked up recently and following this game we’re unbeaten in seven, having won four away games on the trot. In previous seasons our home form has been the rock of our successes, our away form having been pretty woeful. However, what was Fortress West Leigh is now Fortress Everywhere Else. 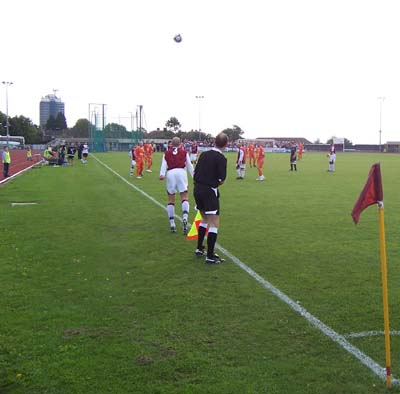 We’ve been to Newport County and won 2-0, triumphed 3-2 at Thurrock and 2-1 at Maidenhead. The latter, however, was in the Setanta Shield; essentially the Conference League Cup, except this is a prize you can’t drink champagne out of. However you could use it as a platter to carry several flute glasses which you could then fill with bubbly for a more formal black-tie, rather than shirtless in the dressing room, celebration, and given the value which fans ascribe to this tournament, the winners turning it into a tray might well happen. However the prize money is relatively good thanks to Mr O’Telly’s involvement so club boards are quite keen on progress in it, thus we’ll take that on to our second round meeting with, deepest joy, Eastleigh.

However our main goal this year, particularly after doing the Cup business last year, is promotion and after stumbling over the first hurdles we’ve since been putting a run together that suggests we can indeed be thought of as contenders. Many had had us as favourites, and those who didn’t probably fancied Chelmsford. In fact it is two of Chelmsford’s fellow promotees, AFC Wimbledon and Team Bath, who’ve been scoring like they’ve got a box of 50-Clubcard-points-with-every-goal-scored vouchers that are due to expire at the end of September, that have led the way, along with Hayes and Yeading who’ve been going about their business largely out of the spotlight. 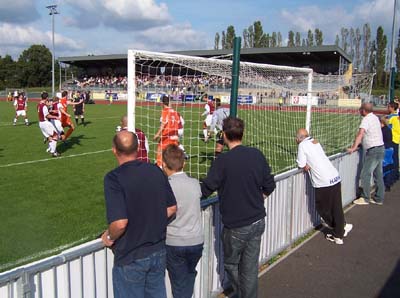 Yet, prior to this game, Chelmsford were also unbeaten and thus sticking around near the summit. As such this game would be the real test of how much the Hawk squad had come together. In a way, this gelling process has been helped by the injury to Guy Butters. As soon as we signed a player of his calibre we were, to some extent, forced to play him, as I’m sure he’s not in it for buttons, and thus expensive to have sat on the bench.

However in Ian Simpemba and Gary Elphick we had a central defensive combo that already looked a potentially brilliant duo, neither of whom was particularly easy to drop. As a result, we were kind of forced into experimenting with a 3-5-2 formation to fit everyone in. Since Butters’ injury, we’ve looked much more in control, and that’s no disrespect to him, as being back to 4-4-2 has meant everyone now appears to know what they’re there for.

Although our defenders clearly believe the goal-scoring is now down to them, what with Gary Elphick scoring at Fisher, Maidenhead and adding a third to open the scoring here. At this rate he’ll be our first centre-half to hit double figures since Liam Daish nabbed ten, seven seasons ago. As it happens this latest Elphick effort was very Daish-like, being a classic defender’s steaming header, majestically meeting a corner with the full force of his forehead, leaving the outcome in no doubt as soon as his feet left the ground. 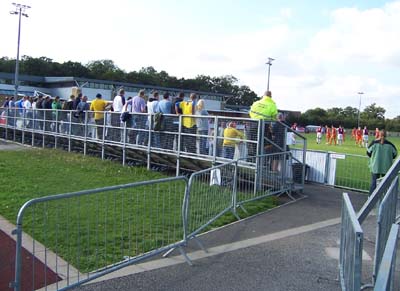 Yet for all our good work, Chelmsford looked a good side and kept us on our toes, particularly Kevin Scriven who was forced to make a tremendous diving save on the stroke of half-time that preserved our lead through the break. So far so good.

Over the years we’ve had a pretty good record against the Clarets but things have certainly changed for them since I last saw us play them away at their temporary accommodation at Billericay Town. Since returning to the city (at lot of people try to irritate their support by reminding them that they’re not really a city due to the lack of a royal charter, not me though, instead I’ve decided to call them Tickle-Me-Chelmo), the crowds have flocked back, a thousand coming through the gates each week. It might be an athletics stadium, but at least they go to the effort of putting some mobile terracing up behind each goal. In fact it’s only a shame they couldn’t get some rotating-restaurant gears going underneath the track to save us moving at half-time. I quite like the idea of spinning around the outside of the pitch like new contestants coming onto the Blankety Blank set.

As was to be expected, the home side started the second half brightly looking to pull back the deficit and they eventually did so, a free-kick dropping into the box, allowing Andy Duncan to smash it past Kevin Scriven. What made this all the more galling was that this came barely a minute after Craig Watkins had had a goal chalked off for offside [see below]. 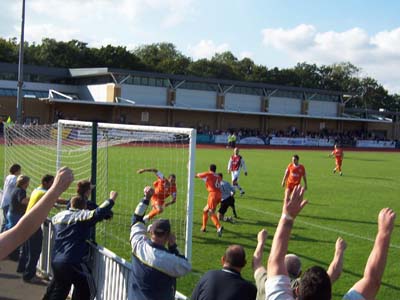 Kevin Scriven had to be at his best again to prevent a Tickle-Me second, Jeff Minton getting his full power behind a shot but Scrivs had committed himself, throwing a kung-fu shape, spearing his right foot like Eric Cantona into a pair of boorish Crystal Palace moobs and blocking superbly. However we absorbed the pressure and pushed forward with some of our own. This was rewarded in the 68th minute when Craig Watkins received the ball on the edge of the box, jinked and dogged his way through the defensive blockade and hit a shot that flicked off a Chelmsford boot, beating keeper Danny Gay at the near post.

Ten minutes later, for something like the sixth game this season, an opposition player found themselves looking up at a red card; on this occasion Jason Hallett for an elbow thrown in the direction of Jay Gasson. The home side still kept coming but two-one it remained and, for all Chelmsford’s decent stuff, no less than we deserved in a good quality game of football played with the correct kind of ebb-and-flow tension. Perhaps this will stand as the statement of intent that we hoped we’d see a bit earlier, but given that it’s only mid September and we are nicely positioned as a stalking horse in 7th, hopefully this is a head of steam that will keep on building.