One downside of our FA Cup run, in the ‘proper’ rounds at least, has been that all our games prior to this replay have taken place roughly 200 miles away. I say it’s a downside, but it’s really an upside on the field, in that it has made the achievement all the more laudable, incredible, un-buhlinkin-believable. However, in terms of galvanising the local community into taking us to their hearts, it has been a bit of a problem, in that there has been no opportunity to build up a Cup fever head-of-steam.

Managing to get Swansea back to West Leigh Park for a replay has shown just what we’ve been missing thus far. West Leigh Park totally sold out for the first time, and the atmosphere a mixture of excitements, the first-timer’s new-experience stuff, as well as the passion of the old lags brimming over like a neglected pot in a busy kitchen. In the past we’ve had crowds at the top end of the three thousands, but that’s been for pre-season friendlies against Portsmouth when, in fairness, 75% of the crowd is there to twitch along with ‘Arry. 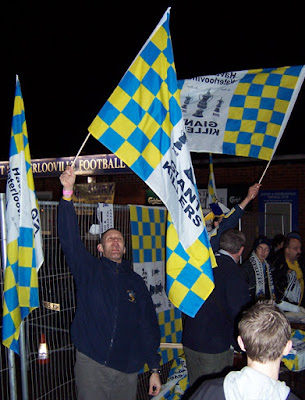 I love our ground and love the fact that it’s improved about one hundred fold since I first started going in 1999. It’s a place that deserves to be filled to bursting and tonight we managed it with ease, sold out signs going up on our single ticket booth (also known as the club office) within two days. It took a while for our shared local rag, The News, to get into the spirit, although like I say, distance breeds detachment.

I guess this whinge about local coverage comes only by comparison to the national reportage, the English football media appearing to have set up an elaborate hack Kibbutz in the car park. The attention has been astonishing: The Sky News helicopter chasing Shaun Gale’s car at high speed down a motorway; Justin Gregory doing adverts for the Post Office (“More than just stamps”); and Brett Poate sauntering down a film premiere red carpet somewhere, arriving just before Craig off of Big Brother, Billy Pearce and the mush who used to play Sgt Cryer in the Bill. Such has been the fervour, every night Leigh Park’s urchins gather eagerly in the car park, awaiting a glimpse, all they need is a glimpse, of our club secretary, TV’s Trevor Brock, also known as The News’ Page 62 stunna!!!! 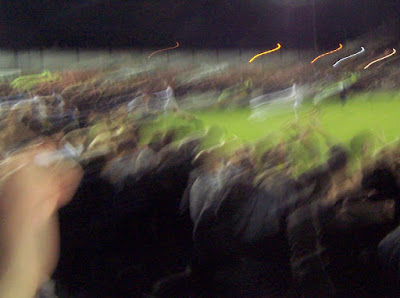 Of course, none of those things have happened (although I wasn’t able to pop down to check on the last one), but I’ve half expected to see such shenanigans each time I switch on my telly. If this is our media circus, the trapeze artists are flying higher than ever before, Nellie the elephant is Cossack dancing on a medicine ball and the clowns are actually funny.

It’s not just the telly either. Kevin Scriven has been pictured being toured around his building site in a wheelbarrow, Tony Taggart has been getting enough mean-and-moody-in-high-viz-vest portraits for a celebrity bin-men charity calendar, and we’ve been the Non League Paper’s cheeky centrefold, a double page spread reporting on the team’s cotton-wool-between-the-toes, cucumber-on-the-eyelids pampering session in advance of the replay. All paid for by the league sponsors too. Nice of the people at Blue Square to reward their best performing side in this year’s FA Cup with, well, with a hen weekend. 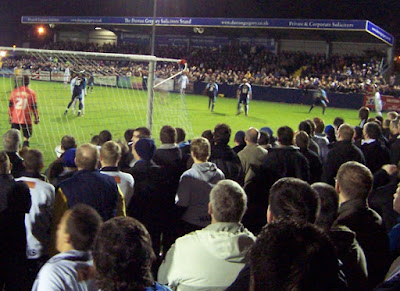 All very nice like I say, but I’m not sure having to look at Charlie Oatway’s moist nipples over breakfast is entirely conducive to a relaxing Sunday morning. Still, we need to milk this publicity cow while it’s ambling through our fields desperate for our plucky-non-league cud, and although I’m not sure I could get used to our strike partnership being one of the features on Football Focus, it’s nice to have seen it more often than never, as had been my prior expectation.

The main focus of that interview was Rocky Baptiste, who had rescued a lacklustre season by his standards with the equaliser at the Liberty. As each game passes, we get a new hero. It was Mo Harkin against York (pretty low-key by our growing standards), Tony Taggs at County, and now Rocky. Named after Brazilian legend Jairzinho, Rocky has had a lot to live up to in footballing terms but, despite having been here before scoring for Farnborough against Arsenal at Highbury five years ago, I’m not sure if dealing with the nation’s media would be something he’d like to do week-in-week-out. In fact, Rock’s Match of the Day interview after the original Swansea game ranks as possibly my favourite Hawks-on-telly moment yet. Asked about H&W’s chances in a replay he replied softly, in a manner that suggested he’d just lifted up his head from a particularly heavy waterbong hit, “hopefully we can get a result and [lengthy pause] that’ll be nice”. 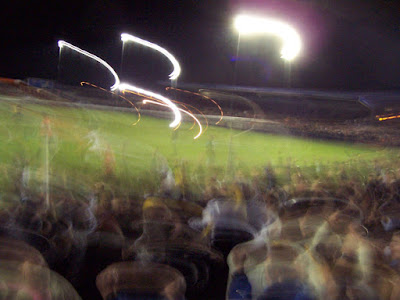 Take the sentence apart if you will, and I just have, but there’s nothing to argue with in there, particularly with the slightly swirly hindsight I find myself currently swimming in. Cos we done ‘em. Their accusations after the first game that we were a bunch of nasty pub-band doggers kicking their marshmallowy lads up in the air came first from manager Roberto Martinez, and then were propagated across our web forum by a few non-representative Swansea fans looking to exhale nothing but righteous fury and jibes about our semi-pro status.

Then Swansea defender Garry Monk decided to regale the Daily Star with stories about how much of a hell-hole our ground is, recalling how he’d been spat at, and seen towels set on fire there whilst turning out a few years ago for Southampton reserves. That it was a game against Portsmouth reserves, and not us, is not mentioned, and achieved nothing aside from stoking our fires (internal, not bathroom linen).

There’s no getting away from the fact that we were very fortunate in the first game and, by rights, should have been beaten by what was, obviously, a much better side. However, with the carrot of a trip to Anfield now dangled in front of our horsey faces, back on our tight pitch and surrounded by 4000 fans baying for history to be made in front of their own peepers, tonight would require more than earnest endeavour.

Clearly Shaun Gale was able to communicate this, as we came out of the traps like a greyhound that’s eaten its way through fourteen sachets of Winalot Chunky Chicken and Amphetamines. We looked busy alright, like we were quickly tidying away the Friday afternoon paper aeroplanes in the anticipation of the boss sticking his head out of his office, but more than that, we were looking classy. I’d go as far to say it was the best half of football I’ve seen from a H&W side. Well, if you’re 3-0 up against a side 83 places above you in the football pyramid, it would seem overly picky not to. 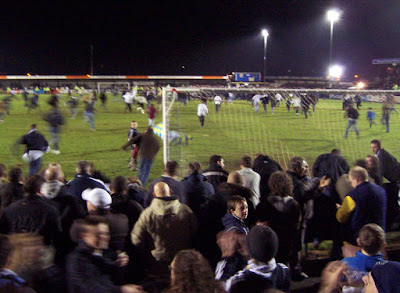 Firstly, in the fourth minute, the big frame of Richie Pacquette bearing down on Garry Monk forced the Swansea defender to put the ball past his own keeper and prove that karma really does exist. Such unexpected delights and behind the goal we tumbled together as elbow-locked sardines in a space where you can usually run up and down and do a few squat thrusts after a goal. Tonight, we mosh (and fall over) as one unit. The safety-unconscious pulsation was to occur again after 25 minutes, Jamie Collins’ shot bouncing off a few legs before settling in the net, then after 37, Big Rich’s scuffed shot across goal was met at the far post by Rocky’s out-stretched leg. This we had not prepared for. We felt sick. Collectively. But in a good way. 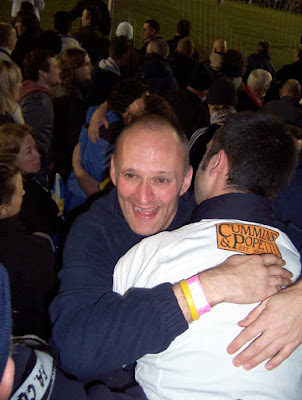 However, this is not to ignore the fact that half time could have been a lot less buoyant than it was. Just two minutes after Rocky’s goal, Swansea got one back, a quality finish from Guillem Bauza. Then two minutes after that, Phil Warner’s late tackle earned them a penalty. Our hero for tonight? We’ll take Kevin Scriven, who pushed away Leon Britton’s spot-kick.

Of course, always having the 83 place gap in mind, we knew we couldn’t afford to rest on our laurels, and it all started to get it a bit too real again, when Jason Scotland slotted home a ball rebounding off the post to bring it back to 3-2 a couple of minutes into the second half. The spectre of blown opportunity was starting to knock about the place. However, this was batted back by us not actually falling to bits but going back on the attack and scoring a 4th, from the head of a man desperate to leave our club, Tom Jordan. His third goal in two games. At this rate, he can leave our club as often as he likes. 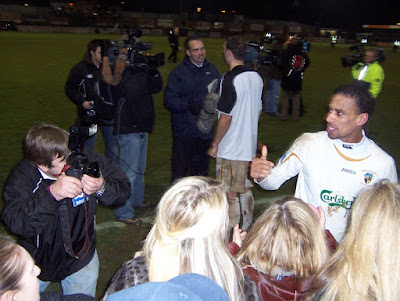 Before the end Swansea hit the bar again, the fifth time over the two games. Thus I could only say I was totally relaxed at the point Andy D’Urso pursed his lips and aimed his whistle towards the ‘o’. Once he’d finished expelling air through it, the invasion began. Scenes I thought I’d never see out our place; people streaming on, players being carried off on shoulders, coming back out for a lap of honour, the lot. I stayed back behind the goal, embracing anyone who came within range. I’m starting to think I’m only in this for the cuddlin’.

So now they tell us we have to play Liverpool. I can’t tell you how gutted I am. I was really looking forward to our home game against Weston Super Mare.

Gutted that I'm not going to be watching us taking on Weston Super Mare at home on Saturday week to be honest.

Fantastic result. Really pleased for you. Half tempted to travel up to Anfield for Round 4.

Superb result - wonderful cup run and what a fixture in the next round, familiar territory for you too I believe!

I look forward to reading the next post and the Anfield report.

"as I imagine there might be a bit of interest in my club's result last night, I will try to get some reportage up on here prior to the usual Monday upload. I should warn you now, most of the photographs are a bit blurry. That, however, rather suits the occasion. Usual verbose guff and impressionistic photo-art hopefully here on Friday morning."

Just made it too!

Great stuff - really chuffed for you, and all the best for the next round. What with Liverpool's indifferent home form and all the unrest off the pitch, you never know...

Just popped in to say good luck for the weekend. Reckon you've got a bit of a chance, Liverpool are rubbish at Anfield this season!

Also wanted to point you towards this article by a pal of a fellow Fulham blogger http://mpkcountingdownto30.blogspot.com/ which discusses the FA's unneccessary meddling in W&H's attempt to enable Justin Gregory to play.

Heres to a good game on Saturday Skif...will give you a wave from the Kop!