As the final whistle sounded on this game, we had reached the half way point of our league season. Twenty-one games played in the 195 days since we began on August 17th at Ebbsfleet. Now, the remaining twenty-one, plus a Hampshire Senior Cup semi-final, will have to be played in the 55 days we have left.

All our Saturdays and Tuesdays are booked up, and the vast majority of our Thursdays have pencilled names against them. Plus it’s still damp out there, people. Wall-to-wall games, it’s ALL FOOTBALL! ALL THE TIME! which is exactly as wearying as it sounds. So many arrangements and re-arrangements dashed and trying to gather a decent crowd three, possibly four, times in each seven day period that remains will be some ask. Whatever monies the FA Trophy run brought in will probably be counterbalanced by the reduced footfall over the coming weeks. Bluddy wevver.

Our club secretary is one of the very best in the business, a man so tireless he’s propped up on bricks, but you wouldn’t have blamed him if by now he’d started screaming in the night and had contemplating a killing spree. On a similar note, our groundsman has worked ceaselessly over the past months and has been punished more than most when the local official dips their toe into the gurgling gazpacho soup that used to be our pitch, shakes their head and begins to whistle Pete Seeger’s Waist Deep In The Big Muddy with an increasing sense of panic as our playing ‘surface’ creeps up over their nipples. 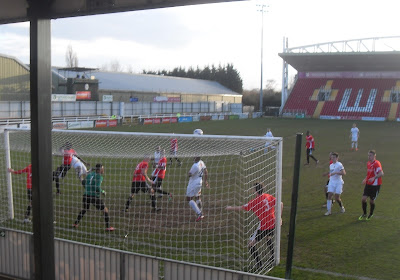 There was a 9am pitch inspection here at Woking, temporary home of Hayes & Yeading United, but thankfully a good few hours respite made sure we didn’t have yet another blank Saturday and another blocked out Thursday berth. After a late P-P at hone to Whitehawk last Monday as well, it was even more important that we took the opportunity to get back on the saddle after falling off and grazing our knees somewhat last weekend.

Try as I might to put a brave face on it, that game will cast its shadow over a lot of what happens for the remainder of this season. Indeed, while last week’s post was an attempt to shake off the disappointment, it ignored some central horrors that await us. My terrace colleague Lammy was moved to offer this rebuttal on the Hawk forum last week…

“If [Skif] was any good he would have been able to change the result or something.

And then there is the taunting - safe inside his London mansion he warns of all the grief we are about to face from The News, South Today, Radio Solent, all safely out of his earshot. It's like Lord Haw Haw has returned to warn of all the ills we are about to discover.

But it's what he doesn't warn us about that is the worst of it. All those days, weeks and years recalling the horror. It starts with each Gosport defeat (like yesterday) and will increase when they are relegated. Each future Hants Cup victory over them will just make it worse. Then in 5 years time when they are scrambling around the park pitches that represent the Southern league South and West pub league they will still be the team that stopped us going to Wembley.

The final part of this anguish is that there is no easy door to lay it at. I need a scapegoat, why didn't someone get sent off, miss a penalty, why wasn't the ref to blame? In the absence of all others I propose blaming Skif and his pre-match-photo-taking over-confidence for this life scarring incident. I hope [he is] man enough to take responsibility.....

I don't know about you but writing about it hasn't made it any easier to deal with either......not coping with this very well am I?”


Which is frankly much better and more evocative than anything I’ve written all season. I spend HOURS on these f***in’ things, and he just waltzes in with his heartbreak and steals the f***in’ show. I’d have him banned from Westleigh Park if I had my way.

Anyway the point is, there was one I swear, we needed a strong response from the team lest we all collapse, weeping like a skin abscess, into a self-pitying heap for the remainder of the campaign. For the first half, we lacked a little sparkle, running about listlessly like rheumy-eyed eight year olds soon after having their legs smacked by an authoritarian supply teacher. Sahr Kabba didn’t look entirely fit and it is to be hoped the fox-in-the-box we saw earlier this season can be back feeling himself, as it were, again soon. 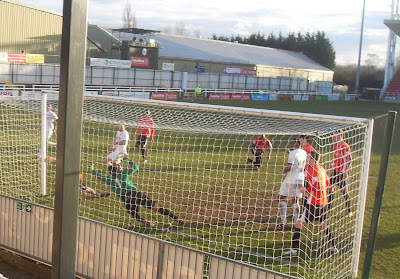 Not that the first half was chanceless, Pedro ‘Pele’ Monteiro skimmed the crossbar with one shot from out wide. Well, I say shot, it was as much a cross as the thing they nailed Jesus to, but had it dropped in, we’d have cared not a jot. In addition, Sahr Kabba did get the better of Hayes & Yeading’s two big central defensive units on one occasion, but his attempt to curve the ball around keeper Mikhail Jaimez-Ruiz ended up ploofing against the side-netting.

Largely though, minus a couple of scares, we felt in control and that continued into the second half. Dennis Oli replaced Sahr at half-time and, being about the size of Sahr Kabba sat on the shoulders of another Sahr Kabba, had a much better physical presence to get into some shoulder-to-shoulder with Ben Gerring and Dean Inman, and indeed looked as lively as I’ve ever seen him. Dennis is a six-foot, broad shouldered bit of beef, but you can sometimes forget he’s even there, which considering he often plays as a lone striker is a bit troubling. No danger of that today as he barrelled about like a pre-teen on triple-shot coffee.

Similarly, after a few disappointing weeks, once Christian Nanetti was introduced after an hour (along with Alex Przespolewski) , he also put in the most sprightly shift we’ve seen from him in a fair while too. He was able to stretch the H&Y defence much more than the reliably hard working Scott Jones had been able to do.

Indeed, it was Christian who was to make the vital contribution to our eventual winning goal and, in rare style, being that his intervention involved his head. Bear in mind that Christian is 3’ 6” in his kitten heels, and you’ll understand what a sporadic treat that is. Perry Ryan’s corner-taking had been erring on the side of caution with short jabs to nearby team-mates, generally leading to nothing. Eighty minutes in though, he decided to swing it into the near post where Christian’s little eyebrow flick looped into the six yard box where Ryan Woodford was waiting to calmly slot home [lower picture].

Ryan has had a stop/start Hawk career, suffering long-term injury, being loaned out to Gosport at one stage, and having to battle with Pedro Monteiro, Ed Harris and the like for the central defensive slots. However now that Ed has suffered an injury that threatens to keep him out for the rest of the season, Ryan has an opportunity for a run of games and to remind us why we fell in love with him after he turned up from Portsmouth’s Academy five years ago.

So needless to say, first time out he not only has a header cleared off the line [top picture], as occurred about midway through the second period, but he scores the winner. Yeah, we still like him. Indeed, we still like them all because they did exactly what they had to do. It was a bit of a grinder of a match and not the best we’ll see from them but nonetheless they kept doing what they do well, passing the ball around and being patient, ultimately getting their reward.

Dogged one-nils away from home with the fixture pile-up we’ve got? I’ll take as many of them as you can give.