Just getting a game on has been a feat in recent weeks against the rains that have battered the south coast. Our pitch has had little respite, and even after a couple of days with only a shower or two, the central strip of the pitch remained heavier than a rhino that’s over indulged on the Christmas Quality Street.

However it was fit to play even if further rains began to fall about an hour prior to kick off. It was a fine rain coming in at a slant. Omens wise, this was good news, as similar conditions abounded once we managed to get our postponed quarter final tie against Aldershot going. Being unable to defeat the lake this past weekend, this first leg moved to a Monday but the school night factor, plus the fact it was a wind-and-rains-is-cold grimmer still saw a good two thousand people turn out. 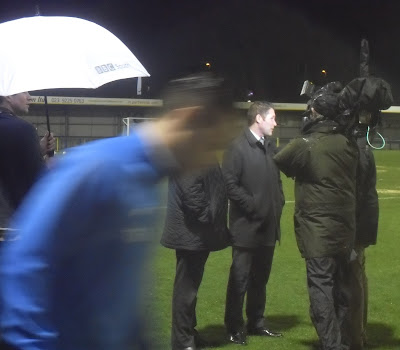 This is what it’s all about. Four figure attendances, Westleigh Park under lights and a HUGE prize on offer. HUGE. For those who’ve not been paying attention – day out at Wembley for the winner over two legs. Pretty good. Pretty pretty pretty good. Thus, in as much as we were facing the team currently rock bottom of our division, a team we had thumped 3-0 on this ground only seven weeks ago, this was something entirely new and separate.

Indeed, last time we played them, the managers weren’t required to talk live to camera on the local news, nor were they brought together at Fratton Park for a photocall. Said gathering left the south Hampshire public with the full horror of an image of Gosport manager Alex Pike giving our hero Lee Bradbury a cheeky kissle around his ear-‘ole. All good larks Alex, but there was no need to leave the tongue in, sunshine. Lee generally prefers a cotton bud to clear that out. 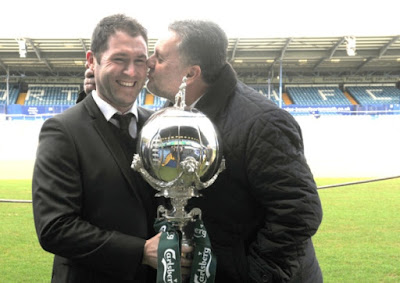 Lee was left holding the baby too, as Alex Pike had no truck for the touch. Superstition dictated that he kept his grubby feelers off the beefy silver chalice, whereas our boy was happy to take the full load. “How can holding the trophy have any influence on the result?” said Lee in such a way as to imply “How old are you, Pikey? Eight?”. The Gosport manager would have replied but he was too busy reeling in his lizardy licker from Lee’s luscious lobes.

After the talk, the hype, the awkward photos and the big bastard weather, we finally get down to a first leg and the time of reckoning. If you are drawn at home for the first leg, you ideally want to be taking a lead to the away game and all talk was about what lead would be sufficient to take over to Privett Park this coming weekend. Now, it’s difficult to determine whether this was hubris or nervousness being betrayed but there was certainly no getting away from the fact we, and pretty much everyone, had us down as favourites, and if we could establish a dominance, home was the place to do it. 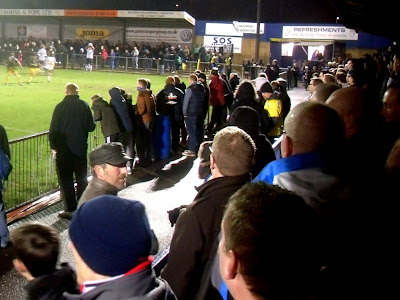 That brings its own pressure of course, with the ‘underdogs’ keen to upset the odds. As such it was no surprise when the first half played out to a damp stalemate. Prior to kick off my chums asked me how I was feeling. I felt relaxed, serene even, possibly because I’d already been in the ground for 90 minutes to soak up the change from empty to much-fuller-than-we’re-used-to. It’s a glorious sight to see so many people pouring through our turnstiles like lava through Pompeii, and the resulting puffed-up chest meant I felt alright.

This was all well and good, until two minutes into the second half when the bottom dropped out of my contented world. Bosh. There it was, the Australia of my sanguinity, and the penguins of my calm, disappearing south into the blackness. A long ball from ex-Hawk Sam Pearce was flicked on by Mike Gosney, Pedro Mointeiro’s attempt to clear swung and missed and Tim Sills was quick to pounce placing a swift shot across goal and into the far corner. 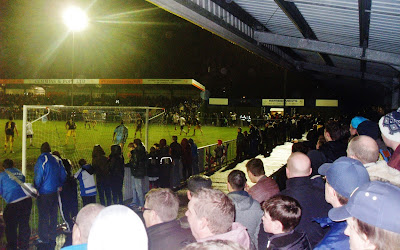 I could feel my face turn green. Proper feel it. Not in the good Incredible Hulk way either, this was much more “you won’t like me when I’m queasy”. My stomach was pushing its way into my socks, my trembling knees unable to stoutly repel against its cowardly retreat. This is what it is, these big stakes games, the moments of full on joy often getting kippered around the chops by terror, fear and disappointment.

All I could picture was Alex Pike laughing maniacally in a set of thick welder’s gloves while making off with the FA Trophy, screaming “you’re my wife now” at the magnificent mug. Such was my malaise until, twelve minutes later, Nic Ciardini attempted yet another cut inside on the right wing onto his left foot. We all know what Nic can do with space on the edge of the box, but it seemed as though it was about time he thought about passing it for a change.

Of course, as soon as this thought enters your head, Nic was duty bound to get the space at the edge of the box and unleash a daisy cutter that nutmegged a Gosport defender and swooshed past their Hawk-trained keeper Nathan Ashmore like an angry bat. Speaking of bats, on seeing all this unfold, craziness behind the goal erupted to the level of ‘bat-shit’. One-each. Phew. Once again I felt relaxed albeit with the nagging feeling that without a lead, we’d be leaving ourselves vulnerable over at Privett Park.


No further goals were to arrive, despite Cards having another bolter tipped over the bar by Ashmore, and a strong penalty claim being turned down. However it was nervy stuff, especially with many an attempt to play football resulting in passes grinding to a halt in the muddy and sandy soup near the half way line. From such things do breakaway goals occur and I continue to breathe a sigh of relief that we escaped that suckerpunch.

Thankfully, away goals don’t count so essentially now it’s a one-legged away semi-final for the right to stride out at Wembley like the owners’ of all Hampshire. We must still have confidence, as our team has now not lost since November 28th. Ten games won and four drawn since then, albeit with about a further forty-seven rained off, so there should be no lack of belief in our side. The players’, if they’re reading should know, that the belief extends to the terraces. C’mon the Hawks, there will never be a better opportunity to strut at the big stadium.

Nobody is now favourite. It is winner takes all. It is a shoot-out, potentially literally.

*Bradbury/Pike picture by Paul Jacobs for the Portsmouth News.

Bradders, Pike is a clever manager and he's using a bit of psychology to undermine your team e.g.calling you the weakest ones left in the competition and then going out of his way to praise groundstaff. Get them fired up, do your lads want Wembley, or to go out to mediocracy. If Gosport get to the final apart from being boring they will get thrashed.Play them off the park on Sat and good fortune.

Bradders, Pike is playing a clever psychological game. He talks about Hawks being the weakest team, then he says they are still favourites,he praises the ground staff and then on the night they kill the game.It would be a shame for mediocracy to go through.
Tactically out ,think him set your team to hit them on the break.Ask your boys if they want Wembley to play Gosport off the pitch.