It’s that time of year again. You’re off work and knocking about home, completely at leisure. What better time to catch up with what the Hawk players have been tweeting about recently, eh? Well, it turns out Steve Ramsay put little effort into his Secret Santa gift purchase and was blaming illness while Scott Jones left his Christmas wrapping until Christmas day itself, blaming the weather.

These are the sort of organisation skills that suggested some of our team for the Boxing Day derby might well be turning out minus their boots. Father Christmas didn’t come good on the footwear, so Jonesy’s wearing novelty slippers while Rambo’s making do with his Dad’s brogues.

Happily, my investigations uncovered a spirit and enthusiasm which does bode well for a good, positive finish for our business in 2013 and looking forward to 2014’s doings, most notably with Nic Ciardini telling the world that the Hawks WILL be making the play-offs (#seeyouinMay, #confident). Does me. 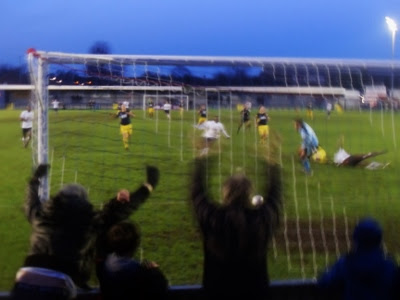 Form has been pretty good in recent weeks with several rounds of the FA Trophy negotiated and a couple of hefty home wins in Conference South competition. Firstly there was a 3-0 win over Chelmsford before their new manager bounce kicked in, then a 5-1 thrashing of Dorchester who have been perennial whipping boys of ours. If they get relegated this year, their disappointment will no doubt be tempered by the fact they won’t have to turn up at our place next season for their annual trousers-down spank action.

Thing is despite the fun we’ve had with Dorch, we’ve always respected them as equals, as being a club of a similar stature. In fairness, we’ve not had that with Gosport Borough, not since the merger twixt Havant Town and the ol’ ‘Ville any road. Indeed, even as recently as 2007, Gosport were still three divisions below us in the Wessex League.

Two promotions in the last two seasons have seen them join us in the Conference South. However, despite being covered by the same local newspaper, there’s no big history of rivalry between our merged club and Grotspot Bollocks. Alright, maybe a tiny bit given we like to be the top dogs of semi-professional football in The Portsmouth News’ catchment area, but generally this derby has all the danger of a cotton wool avalanche and all the fury and resentment of Christmas knitwear.

This didn’t stop the local rag trying to stoke it up a bit. Lee Bradbury was asked to comment on the fact that Gosport field almost as many Hawks as we do. Well, ex-Hawks obviously, but Sam Pearce came from our youth team and made over 100 appearances whilst Brett Poate turned out 276 times over the best part of a decade. Sammy Igoe, Paul Hinshelwood and Nathan Ashmore are also very familiar to us. He suggested that we’d need to be wary of the fact they might feel they have something to prove. Nathan was asked to respond and said “we have nothing to prove” in such a way as to suggest they absolutely did have things to prove. All paper talk, of course, but if Nath felt hard done by after being dinged out after one particularly harrowing performance at Salisbury a few years back, you couldn’t blame him. 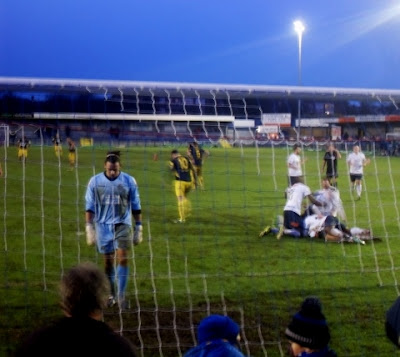 If so, those things were left unproven for now as we treated Gosport with the same disdain as a teenager given nothing but dried fruit and socks for Christmas. In the first half, it was all fairly scrappy to begin with but eventually our greater pace told, with Sahr Kabba making like a jawbone-less bloodhound, dribbling relentlessly, despite the attention of several of Gosport’s kick-em-and-ask-questions-later defensive doggers. Dancing through three challenges, Sahr went one-on-one with Ashmore and was not found wanting with his finish. One-nil after 28 minutes.

Our task was made simpler not long afterwards. When players once of your parish return they will usually do one of two things, score the winner or get themselves sent off. Luckily for us, Brett Poate opted for the latter. Good lad. Once a Hawk, always a Hawk.

However, this is not to say this did not reek of OMENS. Brett quite famously got himself sent off at Swansea City whilst playing for us, and indeed while the home side were one-nil to the good. That game eventually ended one-all and ultimately a replay win for us. Bloody omens. Indeed, we’ve often been found wanting when playing against ten men, so we couldn’t really relax.

At half time Scott Jones, who was on a booking and might well have faced a second one (as Brett had) given the referee’s odd mood, was rightly replaced by Christian Nanetti, who’s tricky business was ideal for taking on a stretched defence. Gosport showed their method for dealing with Christian soon after his arrival with Jamie Brown, the bearded barbarian of the Borough, kicking our Nano-bot so far up in the air he came down with a lethargic reindeer on his head.

Happily, if an opposition is willing to get heavy, we’ve got some heavy up front as well. Now Dennis Oli can only usually outpace the carcass of an unmourned hippo, but despite turning like a rust-coated Luton van in an unadopted, overgrown cul-de-sac, he was able to part the Gosport defence like a choirboy’s hair-do, running towards Nath like a boulder encroaching on Indiana Jones’ personal space and finishing with gentle ease. Two nil and not much to worry about [see pics as ball rolls in and then ensuing bundle].

As such, aside from a rasping Ramsay shot which Ashmore had to do well to tip over, we eased off a bit and Gosport had a few moments, our keeper Scott Bevan having to be sharp to parry one dipping attempt over the bar and also punching away a terse, point blank shot. From that punch we went straight up the other end and almost scored ourselves but Ashmore was at his best to prevent Christian from having life too easy.

A third goal was to arrive in injury time with substitute Alex Przespolewski, like Kabba and Oli before him, able to barrel in with the Gosport defence once more made to look like meth addicts thumbing a lift on a country road. Nathan again tried to use his heft to close down the angle, but this worried Alex not a jot, and he slotted home beneath Ashmore’s advancing Aris.

So, three nil against the local ‘rivals’, with a former Hawk hero sent off; doesn’t get much better than that for a Boxing Day treat. Makes one feel very good for the prospects for 2014. Indeed, in terms of positive thinking, let me leave you with the twitterings of our midfield dynamo Nigel Atangana who after wishing his team-mates a merry Christmas pledged thus: “for 2014, I would do the best and work hard for the playoff”. Now, that’s the kind of New Year resolution that we can all get behind.
Posted by skif at 1:35 am