Roughly six years ago, you would have found us singing “We’re the famous Havant ‘Looville, and we’re going to Wem-ber-lee” whilst we refused to accept our station and scampered about the shinier floors of the FA Cup like a giddy tramp skilfully evading the Harrods’ security detail.

Now, of course, it was sung then with a sense of irony. Yes, we may have led 2-1 at Anfield for a bit but a semi-pro side reaching the FA Cup Final? Well, that just wouldn’t be achievable. The Premier League chief executive would order a mafia hit on the non-League side’s gaffer before that could ever happen. It’s just as well Liverpool came back to win 5-2 on that famous afternoon, else Shaun Gale might currently be a skeleton in concrete shoes residing in a shopping trolley on the bed of the Mersey.

However, clubs of our level do get presented with a realistic chance to run around north-west London wiv their willies ‘angin’ ‘aht. Wembley also plays host to the FA Trophy final, a competition for clubs in the top four levels of non-League, and we’ve been within touching distance of its apex once before, albeit in the interim wilderness years between the old towers coming down and the gleaming new arch going up. Villa Park was our goal and, let’s face it, “we’re the famous Havant ‘Looville and we’re going to a rough suburb of Birmingham” doesn’t quite have the same ring to it. Still, as it was, we didn’t quite make it anyway, but it was quite the journey. 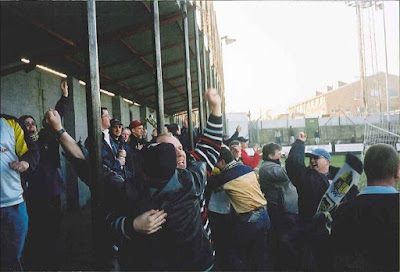 From an extra time winner in a replay at Billericay on a bitterly cold December evening, through a jolly boys’ weekender to the very much uncharted waters of Colwyn Bay to a two-legged semi-final against our then fellow Southern League Premier side Tamworth. Our journey was to end here at Westleigh Park in a drawn second leg after a 1-0 defeat at The Lamb. However, en route the club did achieve our first scalping of a higher level side, winning 2-1 away at Conference side Forest Green Rovers [final whistle pic from that game above].

This was almost eleven years ago now, before the Conference had more than one tier, and prior to FGR moving a few hundred yards up the road to a glossy new ground. When I look back at the fifteen seasons I have watched the Hawks, this even above the FA Cup run season may be the time I recall with most fondness. The big hero of that Trophy run, scoring five goals from midfield, including the superb winner at Forest Green was Tim Hambley [see picture below, taken by Rich Self after Tim’s last game for us at the end of that 2002/03 season]. Timmy remains a solid gold, concrete, nailed on, glued-to-a-bi-plane-with-Solvite Hawk legend, and the memory of his performances, which were as utilitarian as a powerlineman’s toolbelt yet had the elan of a catwalk Cavalier, are enough to bring mist to the most macho of Hawk eyeballs.

It is not then faint praise when some of our supporters starting intoning the great man’s name with reference to our recent French import Nigel Atangana. After a performance such as that against Ebbsfleet, I am quite happy to put my name to the effusive ‘New Tim’ praise, and indeed to petition for him to be given the freedom of Havant, and possibly an honorary knighthood. Not that I’m getting carried away, of course. 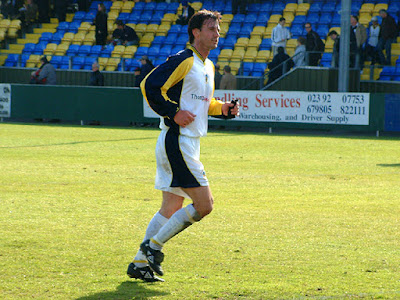 There’s so much to like about Nigel, in fact he’s the ideal. He’s a fantastic footballer playing for us but who doesn’t act like he’s too good for all this non-League shite. There’s no hoity-toityness anywhere in there, if anything he always sounds grateful merely that we’re allowing him to set foot on the pitch. If he gets an injury preventing him from playing, I could well see him hobbling out with a fork at half-time just to have another feel of it.

So there he was yesterday, delighting in his access to our hallowed turf, although it has to be said the green, green grass of home had taken a bit of a hit over the New Year period with the entire surface waterlogged, every inch of it, last weekend causing our game with Whitehawk to be postponed. As such, it was still a little soggy. In fact, during the 90 minutes, there was more squelch than a bare-foot night-time stroll through a slug sanctuary.

Still, same for both teams and all that although it did nullify the impact of Christian Nanetti’s inclusion after six weeks of hamstring-knack. It was a performance as much about solidity of defence and dexterousness between the sticks as much as the attacking intent we showed. We were warned by an oddly embittered Bristol Rovers fan prior to the start of the season that we’d signed a duff ‘un in goalkeeper Scott Bevan but they could not have been more wrong and our Bev made two vital, expert first half saves which meant any clean sheet bonus coming his way was properly earned.

There was plenty to keep us excited coming forward, although the ball would often stick like an over-cautious pontoon player, meaning passes might stop short in the slurp or shots get caught up between feet. As you might expect it was a ball flying through the air just after the hour mark that made the difference, a Nanetti corner being met firmly by Atangana’s instep, the ball taking a deflection off a defensive thigh and past Preston Edwards in the Ebbsfleet goal.

Not long after the Fleet broke and Billy Bricknell, with his name stolen from an 1830’s chimney sweep, turned the ball home only to notice, after a relatively prolonged celebration, that the assistant ref’s flag had been raised all along. Is it wrong to giggle when you see the double-take towards the linesman? If it is, I am a wrong ‘un.

Naturally a team of Ebbsfleet’s quality would not be taking a Trophy exit lying down, and so did they pile on the pressure which our defence soaked up with aplomb, even allowing a few breakaways of our own. It was, though, to remain as a one-goal game, and it was fitting that the clear Man of the Match should score it.

The final whistle blew and the old song came back to the lips. “Wem-ber-lee, Wem-ber-lee…” we bellowed for as long as we had the lung power. To be honest, there’s something in that rascal of a melody, plus the fact we only sing it when things have gone rather well, that means I’d have been happy to sing it for hours, until Sunday morning’s sun had begun to peek over the horizon to see what it was we were getting so excited about. I’d say it’s probably my favourite song to sing of ALL TIME, and I do a mean ‘This Charming Man’ at karaoke, I’ll have you know.

So, we advance to the quarter finals for the third time, a 2-0 defeat at York in 2008/09 being our last visit. Mind you the fact we are have made it to the last eight and Eastleigh, Aldershot and even flippin’ Gosport have made it there as well, has taken a touch of the gloss off. Seems like they’ll let anyone in. The draw takes places tomorrow, with we four Hampshirite scrotes leaping into the velvet bag with Cambridge or Luton, Tamworth or Chorley, North Ferriby United and, our conquerers from last season’s competition, Grimsby Town.

Avoiding the Conference Premier big guns might be the first wish, but there will be no easy games in there. Given the fact we have only played Conference South opposition in the four rounds we’ve got through thus far would suggest it’ll be Eastleigh or Gosport to continue the trend. Not sure how I feel about any of it really but tomorrow we’ll find out exactly what’s what. For now, beaming I is, bloody beaming.