We’re keen on omens here in the London Branch, especially when it comes to the FA Cup. Nervous about our form when going into an away tie against a side from the Southern League South & West division, two levels below our own, we needed a sign, we thought; a sign to tell us all would be well as the H&’Dub set out on the FA Cup trail once more.

Then, as we drove around the M25, we saw the sign. It was a ‘Road to Wembley’ sign alright, it was literally a road to Wembley sign. However as happy as I was to see that shopping basket logo as an affirmative augury, my fellow Brancher Adam did point out that whilst we might be coming off at the correct junction, we would then be heading west. The road to Wembley it might be, but we were heading the wrong way on it. As I was saying, I’ve never had any truck with omens. 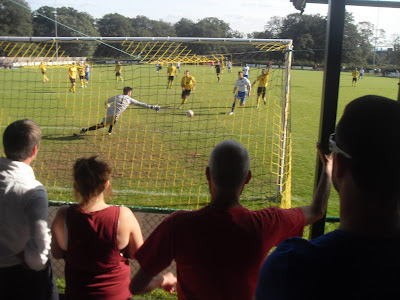 I love the FA Cup though and that’s partly down to the opportunity it provides to visit clubs in new locations, and this would be our first journey into Oxfordshire for a game in eleven years, a 4-3 cup squeaker at Thame in 2001 following a 4-1 success at Carterton Town the year before. The latter game featured not only a parachute display team descending upon us prior to kick-off, but was swiftly followed by the kind of hailstorm that suggests the end of days is nigh. The flimsy lid on the one tiny bit of cover at Carterton’s ground started to bow under the strain of the chunky water before thankfully the clouds departed. Now that’s proper FA Cup early rounds stuff!

Since then, the Oxon county has been uncharted waters, and, speaking of those, North Leigh FC appeared to be a kind of Bermuda Triangle of a football club. Deep in the sticks and hidden within the trees behind the village cricket club, the dirt track into the ground did have that kind of ‘abandon hope all ye who enter here’/Deliverance kinda vibe. Thinking about it, we should probably have just turned the car around then and there. 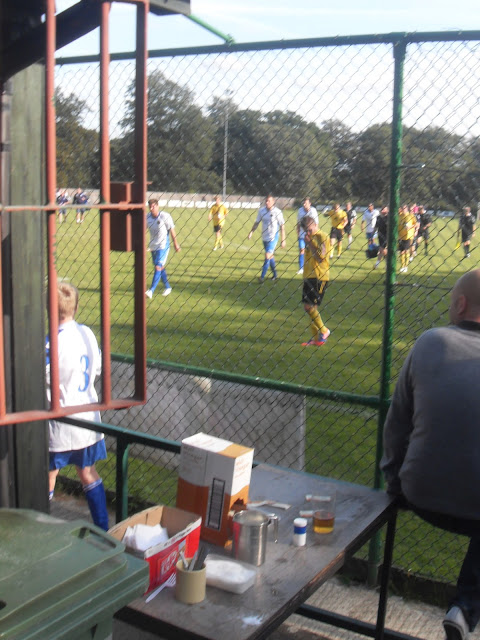 I had posed the question in the morning to the poor souls who have befriended me on the Book of Face about how this game would be seen in future years in the anecdotal history of our football club, how it would rank in the all-time ‘Cup days out’. We’ve lived in the glow of our successes for years; reliving shinned goals, players being interviewed in the back of a Hackney cab on Football Focus, old men serenading us in Liverpool curry houses, but always remembering that those cup runs began somewhere less celebrated. The year of our big cup run, we began at Bognor and needed to overturn a deficit to win. Turn back time and not manage those two goals and our club’s history would be a lot less famous (y’know, relatively) and proud.

It is difficult to appraise a cup run whilst you’re in it, without the full context. Little did we know after beating Bognor that we still had six more Cup ties to play that season and would end up at one of the world’s iconic football grounds. That’s the beauty of the Cup. You get a chance to scalp much bigger names.

Of course, the other side of that coin, the ying to the yang, is the very opposite of nostalgia; the cup ties that are spoken of in either hushed tones or with a heavy grimace taking up the fizzog. Cirencester Town away in 2005 was one of those, and now we have another to look upon and shudder. Where once we scalped, now scalped have we been. As I was saying, I’ve always hated the FA Cup. 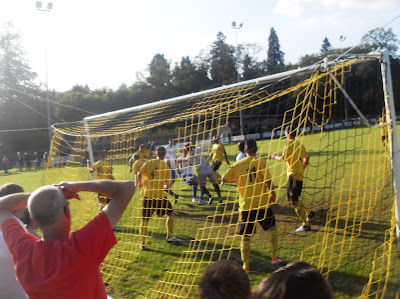 North Leigh have been tearing up on the FA Cup like a puppy on Pedigree Chum-laced homework so far this season. With only one defeat and a 5-3 win over Abingdon in the Scarf & Vest, they are well set for a good year within the bread and butter league puddin’, but are also chowing down on the rich chocolate torte of a lengthy cup run as well. In the preliminary round, they welted six past Thame without reply, and hit the same amount in the First Qualifying Round against Wantage Town, who at least managed a consolation.

Thus, given our indifferent-to-dreadful (depending on whom you speak to) start to the season, and a performance at Sutton United last weekend that exasperated all those in attendance, no-one was dismissing the bruised-banana-skin colouring this fixture had developed. 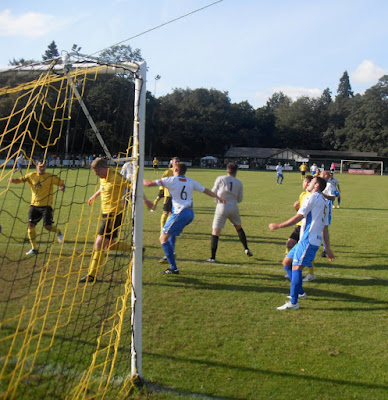 From the kick off, North Leigh looked hungry, and not just because of the smell of the barbecue outside the clubhouse wafting over the grounds significant top-to-bottom slope. We were required to go climbing in the first half, and looked rather troubled by the experience, and so when going into half-time we could at least say to ourselves, "it's alright, we're coming down the mountain when the second half comes". However, whilst we made heavy weather of the incline, come that second period, North Leigh were running up that hill, with no prob-le-hem.

The Millers' players were continually harrying types, ankle-biting on every received Hawk pass like a terrier keen on a trouser hem, never letting us settle and quick to capitalise on our every error. Our players, on the other hand, had so little get up and go it was like they’d been glued to a sofa.

In the end, it was a mistake by Paul Hinshelwood which led to their winner; venturing well out of his left back berth, he lost control and North Leigh exploited the gap with ruthless efficiency. After that they just needed to keep showing their admirable solidity, and did just that, the chances we did have in the closing moments going wayward largely thanks to their close attention.

We don’t help ourselves by not bringing our more creative players into it. Our passing is the Hammersmith Flyover, our midfielders are Hammersmith. Which when you consider our strikers end up operating so deep they take a canary with them for safety, means we have all the attacking threat of a sleeping Pomeranian. 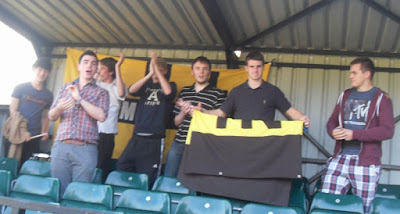 Tony Taggart was a notable exception to this, creative and beavering, but he has seen the fruits of a successful Hawk Cup run. As a result, he seems to care more. Looking at the Twitter feeds of some of our players this morning, after such a performance and result, depresses you even further as clearly it really is just a wage for them. If you want players for whom every defeat is treated like a personal slight or a nagging frustration that can’t easily be shaken off, rather than the game being just something to kill time before ‘avin’ it large down Tiger Tiger, then the majority of this bunch are not your go-to men. This is the most troubling aspect of it all.

On the way home, my old pal Steph messaged me to ask “we out already?” I mentioned this to Adam as he drove and he remarked laconically, “Out? We were never really in.” True that.

So, that’s the 2012/13 FA Cup for us then, it really wasn’t fun while it lasted. Although I'm sure the North Leigh 'Windmill Army' [see pic above] might disagree.Good luck to them in the Third Qualifying Round.

Not surprised to hear that about Taggs, he is a player with plenty of passion and can more often than not give full-backs a bad afternoon.

Things can only get better.