Well, it’s been quite an eventful week in the life of Havant & Waterlooville FC. After departing the FA Cup in such a timid fashion it was like we’d sent a team of kittens out to take on a lit fireworks XI., we followed up with a 0-3 home reverse against Weston-super-Mare that flattered the opposition but writ our malaise so large across the Westleigh Park turf, it could be seen from Saturn.

Now people may recall that it took about eight decades of moaning for the last manager to be removed, but that’s largely because he had the cachet of a tremendous Cup run and over a decade of service to be deemed worthy of some extra loyalty. So much was he considered part of the furniture at Westleigh Park, that following his sacking he was stuffed and stood as a hat-rack in the boardroom. Stuart Ritchie has at least avoided the taxidermist’s cold hands by being dismissed after only ten games in charge.

Now, ordinarily, I’d decry such a quick exit for a manager with a previously decent track record. However, it was entirely clear that something was fundamentally wrong with our club, and he perhaps might be seen as the scapegoat, but there is no doubt that since the decision was taken on Tuesday night, a sense of relief far outweighs concern. Although I should say that as a lot of dirty laundry has been aired in public over the summer and since the sacking, perhaps we might not need to worry about what has been done much such as the manner in which it has been done.

So, we’re managerless as I type, with a ragtag caretaking team including the physio (Phil Ashwell), a defender in his mid-20’s who I used to watch as a spotty teen turning out for the youth team (Sam Pearce) and a former Hampshire wicketkeeper (Adi Aymes) not to mention the bloke we sacked in April, Shaun Gale, still haunting the club like Banquo’s ghost. Knew we should have checked the stitching on that hat-stand.

For all the jokes, and sadly the bitter ill will that still flows towards Shaun Gale, he never made you question his passion for the success of this football club, and helping out after being binned not six months ago, suggests he still has that in him and is worthy of a least a cap partially doffed.

Indeed, passion about the football club has been the thing of most concern of late, with the players copping a lot of flack for seeing more interested in their Saturday nights than their Saturday afternoons, especially in the context of a departure from the FA Cup at the hands of lower league opposition.

So the last week has seen many things. Firstly, the lack of commitment being decried. Then the shock of a quick/hasty/timely* sacking [*delete as applicable – I’d say the first as from very early on it never quite felt the right ‘fit’]; and now we find ourselves in the chattering class-room that inevitably gathers together when there’s a new gaffer to speculate upon.

Contenders are having their heads forced above the parapet whether they like it or not but the plan is to have someone in place before we take on AFC Hornchurch in the league next weekend, so we won’t have long to make ourselves too giddy about Kevin Keegan being available or some such nonsense. Not that we’ve been being that mental about it but we’re setting our sights relatively high, lower league high anyway, with some of the names that keep bubbling to the surface. Who knows though, we shall see what this coming week brings.

So, had the new man been watching here today (and if he was, he was disguised well – may have been him under the Bromley mascot’s gigantic head I suppose), what might he have thought? Well, if it was his first viewing, he might well have had a different thought to the rest of us who have had to watch the Hawks out of a sense of duty over the last couple of years.

On the face of it, only scraping a draw against a team that had ten men for 84 minutes might seem a little low bar to be getting excited about, but for once the team earned their applause as they warmed down on the field. I reckon their reaction to not forcing a winner in the game, collapsing to the turf on the final whistle, might have had something to do with it – for the first time in a long time, it looked like they cared. 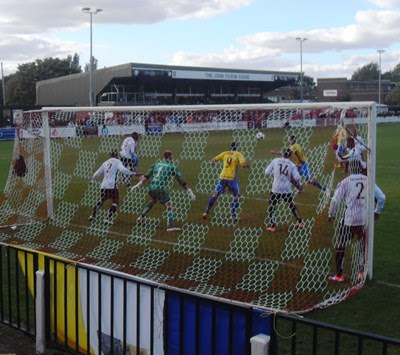 Also, in a shock move, we created chances. More than one in a game. I know, imagine that! However let’s discuss the more disappointing aspects of the first half. By rights we would have scored in the sixth minute, as Ollie Palmer charged down an attempted clearance by Bromley keeper Joe Welch, the ball then flipped over the keeper but back spin meant it would need to be chased. Ollie was winning the race but defender Liam Harwood decided to take the ‘Motherwell Rules’ approach, taking the pint glass and pool cue to Ollie and preventing a certain tap in.

Thus the inevitable red was brandished and, in the absence of Christian Nanetti, dropped after turning up late to the game, Tony Taggart stepped up but unfortunately while sending the ball inside a post put it at a nice height for keeper Welch to save. The keeper then pulled off another two superb follow-up saves from Steve Ramsey.

Ten minutes after this, the ten men provided quite the sucker punch, as a Pierre Joseph-Dubois header was deemed by the assistant referee to have crossed the line, Probably just as well in a way, as it appeared Jake Newton had ‘cleared’ it with his hand.

The remainder of the first half provided little upon which to remark but, you know what, the atmosphere behind the goal was jovial, upbeat and full of good humour despite the goal deficit. I enjoyed myself on the terraces more than I have in a long time, I don’t mind saying.

In the second half it was one-way traffic but largely agony for us watching as even though chances were being created, and that can be considered a boon in itself compared to recent games, they were being squandered with Ryan Moss being particularly negligent, to the point of cruelty, on a couple of chances.

After 70 minutes, Ed Harris had the ball in the net but the effort was flagged offside stifling our giddy before it got a chance to really get up to dervish state. We were piling forward and Bromley’s defence were throwing themselves in the way of shots like suffragettes leaping in front of the King’s horse. I lost count of the times punts ricocheted off a Bromley buttock.

In the end our management committee made an excellent collective decision to bring Scott Jones on in place of defender Harris, going three up front and this paid off with eight minutes remaining; Tony Taggart once again showing his class to skip into the box and dink a cross to Jones who turned in a header at the far post.

After this all roads led back to the Bromley penalty box but sadly to no avail although keeper Welch can certainly be commended for a series of excellent saves during the course of the game, and the Bromley defence showed why they were coming into this game off a run of four clean sheets. A chap I know who I discovered afterwards had been elsewhere in the ground watching as a neutral told me later he thought it was a “shit match” – maybe it was for those without an emotional stake – but there was a lot for both sets of supporters to take pride in.

Yes, we should have made more of our man advantage, but just to see that flash of commitment and life again is enough to keep me buoyant that a new, experienced manager might be able to shake this lot from sluggishness to sparkle.