Now if you read the last two match reports on this ‘ere site and thought to yourself, mmm, I’d like to get a feel for the performances in those games , not the full 90 minutes though, just 45 minutes each would do, then this fixture at Hornchurch was the game for you.

To cut a long story short; the first half had all the oomph of a collapsed lung while the second was so awash with spirit it appeared a nearby distillery had haemorrhaged. Now to stretch a short story long… 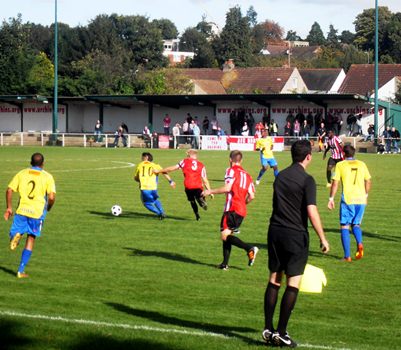 Following last week’s return to enthusiasm, both on the pitch and on the terraces, it was to be hoped that, despite it all, a new manager would replace the caretaking unit that had performed so admirably in trying circumstances. Let them get their feet under table and so on.

For one reason or another that hasn’t yet come to pass, and after a first-half performance of fluffed lines, missed cues and phoned-in meh, our need for a new, permanent man in place felt all the more essential. A Christian Nanetti lob that trickled wide of the post was pretty much the only highlight for us in that first 45, whilst AFC Hornchurch’s collective could comfort themselves through half time by having a lovely 22nd minute goal for company. 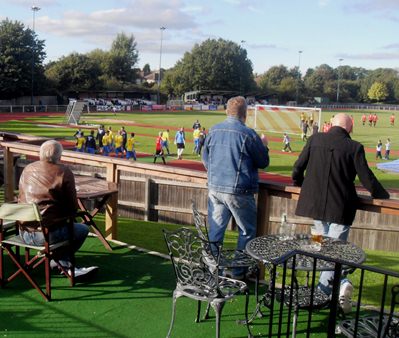 We, however, could only feel a little disgruntled that it seemed normal service had been resumed, and, as a series of 80’s tunes played over the PA, we could but shuffle around this dusty, ageing athletics stadium, and contemplate on what our mysterious, hooded, forthcoming gafferage would need to embody to point us in the right direction.

Now, call me easily suggestible if you like, but whilst listening to Sinitta’s So Macho floating over the ground, I was suddenly overcome by the theory that, whoever the new man is, he should have big blue eyes, be able to satisfy and be big and strong. This, I firmly believe, would be enough to turn me on although, of course, I can't speak for the rest of my Hawk brethren. They might be wanting a Toy Boy.

Clearly, I wasn’t the only one inspired by Sinitta’s aspirational philosophy, as almost the instant we came back out, a whole lot more machismo began surging through us like steroids through a bodybuilder’s bloodstream. This was non more evident than in Ollie Palmer, but then again he has appeared in recent weeks to be adopting an “oh well if no-one else is arsed, I’ll just try and do it myself” approach, putting in the kind of shifts that would put a junior doctor to shame. 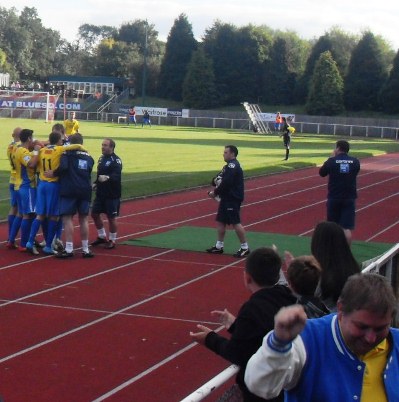 In the space of five minutes, he turned our frowns upside down by first barrelling into the penalty area to latch onto a ball that looped up over the Hornchurch defence. With the Urchins unit looking dozier than a set of cartoon characters that had recently been introduced to a mallet (circling birds, stars, cuckoo clock sounds, all that), Ollie had time to place the ball neatly past Hornchurch keeper Joe Woolley.

The second goal wasn’t that much different, Ollie steaming through a seemingly still sedated Hornchurch defence and side-footing past Woolley once more. Indeed, as if in some sort of Groundhog Five-Minutes, he found himself in the same position yet again not long after, but this time Woolley got the better of our Ollie, spreading himself and getting down rapidly to snaffle the ball up.

At this point it felt like a procession but sadly, we couldn’t hold onto these good times. Ed Harris had been treated for a while after collapsing on the turf and was hobbling around waiting to be replaced by Sam Pearce as the game continued, but a hefty clearance by Woolley went like a route-one rocket and neither Harris nor Eddie Hutchinson could get the necessary tackle in to prevent Leon McKenzie racing through to poke the ball beneath Clark Masters’ timbering frame. Real pity for Clark, who made several good saves during the course of the game. 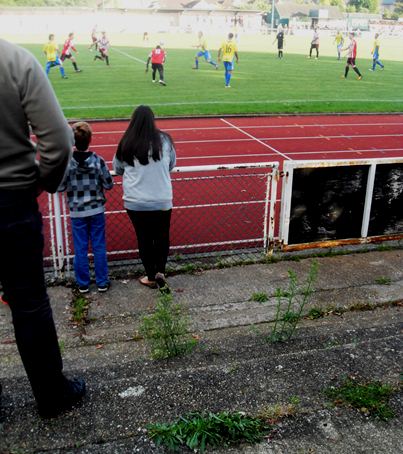 Sam Pearce then almost earned his third red of the season for a wild tackle in injury time, and in the aftermath Ryan Woodford did see red for dissenting himself into the society of a second yellow. Thus it was a rather disappointing end to an otherwise very good half. Of eleven league games this season, we have drawn seven of them and have won only once. We would be bottom of the league but for Truro’s 10 point deduction.

Despite this bleak fact, the performances at Bromley and in the second half here suggest that our new manager, whoever that turns out to be, has foundations on which to build, rather than having to deal with a smouldering crater, as it had looked following the North Leigh game.

That’s the way to sell a club to a managerial applicant isn’t it. “Yeah, we’re not that great, but we were really bad a couple of weeks ago, so if you could make us a bit less sh*t, maybe even ‘quite good’, that’d be, like, really awesome. So…you in or wot?”.
Posted by skif at 12:04 pm