With my only action of the season thus far being our moistened malaise at Bath, you might forgive me for looking down the length of another potentially long and winding ditch of a season with some unease, especially so when we followed that up two days later with a 3-0 home mullering at the hands of Eastleigh.

Getting tonked by your nouveau riche local rivals is hard to take at the best of times but when most other weeks they are taking a sound telling of their own, with the sound of laughing opposition fans exclaiming “you paid all that money, for this shower?” ringing in their ears, it is particularly galling. 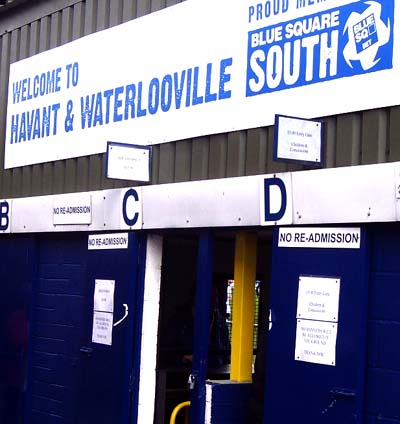 Following that defeat was a 1-1 draw at Staines which was generally considered an improvement, and then despite going a goal and a man down at home to Hayes & Yeading at home this past Tuesday, we rallied to win 2-1, much to the delighted dismay of those present who had believed it another inevitably lost cause.

So for my bleak Daily Express front page weather-based headline of an outlook based on one game, there is plenty you could spin toward the positive, both draws and victories having been snatched from the jaws of seemingly inevitable defeat in several games this season, that bank holiday weekend bust against Bath and Eastleigh being the depressingly abject exceptions.

Having gone 2-0 down in the 25th minute here, one was left to ponder exactly which kind of performance this would now be: the square-jawed comeback or the chinless flop. We didn’t have long to consider these options before the former began. Just a couple of minutes after Tonbridge’s second, Chris Arthur pinged an exquisite cross to the edge of the six yard box where Ed ‘Hollywood’ Harris gave it more back than Sir Mix A Lot’s most fondly remembered conquest, and shoulder-bladed the ball in.

After this, the quality of the play evened out, with chances occurring at both ends rather than just the one, and it was a superb bit of business that put us back on an even keel. After 65 minutes, midfielder Aaron Dawson (currently on loan from Exeter) weighted the ball perfectly toward the by-line so that Chris Arthur could sprint onto it and drop a lolling tongue of a cross right onto the head of Ollie Palmer who angled the ball perfectly inside the near post.

It was a gorgeous bit of football and exactly the sort of thing I’d been desperate to see within the new look (well, newly managed), Hawks on first viewing at Bath. As was said during the last dark days of Shaun Gale’s tenure, we can handle not winning every week if we’re playing decent stuff, and this game eventually delivered on the decency.

We might have won it too, had Scott Jones one-on-one chance with the keeper in the final minute of injury time not slipped wide of the post. Although, seconds before Tonbridge had missed a sitter of their own, so what-might-have beens weighed heavy on the minds of both sets of fans.

Of course, all the while we’re gifting leads to teams like this it’s like we’re playing off a golf handicap that comes from a place of hubris rather than measured ability. Still, to have been entertained by an improving side here, my outlook is now definitely rosier.