Given how much we claimed to enjoy the gallows humour on the terraces in the past couple of seasons, in a way it’s quite reassuring to discover that, despite all the changes that have gone on, we’re still pretty bloody awful to watch. Get your dry jokes, tuts and rollin’ eyeballs back out of the shed chaps, looks like we’re going to be needing those after all.

With music festivals, the Olympics and a scant interest in international football, I’ve had little to do with the beautiful game in the past four months, the one pre-season fixture I did come down for being postponed due to a waterlogged pitch. Something you don’t expect in mid-July, but this summer has certainly not played ball with us, and thus less ball was played. 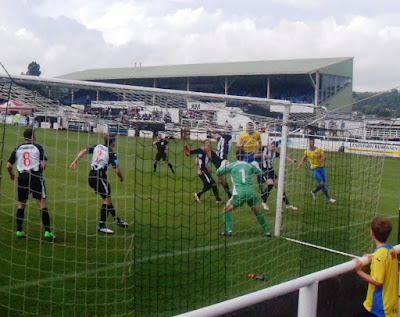 As such I’ve had to rely on reports from my terrace colleagues as to the progress made and while initial concerns were made about the lack of a quality central midfielder, the signing of Stefan Bailey appeared to satiate the nervous types.

Furthermore reports from our first two fixtures suggested that despite injury time equalisers being required in both, we were looking to be a much better side to watch under Stuart Ritchie, not to mention dogged, and not to acquiescing to defeat. Frankly, on the showing here, I feel lied to, and I think I’m going to be having severe trust issues with my terraces associates. They can expect neither money lent nor secrets told in the coming months as I work through it.

So out of the loop I might be, but you can’t call me fairweather, Twerton Park being unroofed behind either goal, and yet I stayed in post despite a veritable vendetta of heavy showers occurring regularly between the sunshine breaks. This was supposed to be the brave new world, but was mainly reminiscent of Chelmsford away last season which was probably one of the worst, and soggiest, afternoons of football watching I’ve ever had.

Other than the heavy duty rain intervals, there was precious little here in 90 minutes worthy of remark either. There was a series of flying saves by our new keeper Clark Masters who, despite being an excellent gloveman, has a name that makes him sound like a range of boys shoes. The returning FA Cup run hero Tony Taggart also went on a superb run to the bye-line that resulted in a goal-line pass that sadly could not connect with a Hawk boot. Taggs also supplied a corner cross that Sam Page’s head put over the line in the eighth minute, but the whistle was blown for a push before the ball had departed from the forehead [see pic above]. Aside from that we were debased down the right hand side, Bath exploiting the huge gaps to good effect to score their first after ten minutes, although it still required an exquisite finish from Josh Low into the far corner. After that Bath could afford to take their foot of the gas and appeared to be working at 80%, but if that’s all they needed, why exert more?

It wasn’t until the 72nd minute that they killed the game off, Kurtis Guthrie being presented with a simple finish from inside the six-yard box. However at no time in the intervening hour, nor afterwards, did we appear capable of taking any points away with us. The only way we were taking anything home from the West Country yesterday was if the coach driver had briefly stopped on the A36 to allow us to kidnap a sheep.

So, it’s fair to say that the start to the Stuart Ritchie reign has been middling, but one must not get carried away. Stepping up to Conference South level for the first time is never going to be easy but, to tactically avoid involving our rather talented midfield by punting the ball repeatedly over their heads, seems rather self-defeating.

Tomorrow, we host our local rivals Eastleigh. They’ve been splashing the cash like an Arabian prince all summer but have yet to take off on what is expected to be an inevitable promotion drive. The sense that they are a side waiting to click, after which they’ll be mullering everyone, added to our less than vital performance here, means I’m more than a little concerned.

However, as I say, it is early days and if there is clicking to be done tomorrow maybe it will be us sounding like a percussionist in a skiffle band.
Posted by skif at 1:05 pm