The 2011/12 FA Cup will end in North London next May. The team that plays twelve miles to the east of Wembley, at White Hart Lane stadium, might consider themselves a fair bet to win it. The two clubs that play on White Hart Lane itself, at Coles Park, might not have such lofty ambitions yet both began their potentially mountainous ascent on the competition in mid-August.

Coles Park is the home of Spartan South Midlands League side Haringey Borough and this summer they have taken on a set of tenants, Haringey & Waltham Development FC, who compete at the same level of the pyramid, albeit in the Essex Senior League.

H&WD have recently renamed themselves having been known as Mauritius Sports, a club that was set up with the aim of providing a good standard of footballing opportunity for the Mauritian community in London, as well as providing a feeder for British-born Mauritians to represent their country at international level.

Along the way, in the attempt to achieve senior status, Mauritius Sports merged with the already amalgamated Walthamstow Avenue & Pennant, before reverting to their original name, and are now widening their scope a little with this latest restructure. 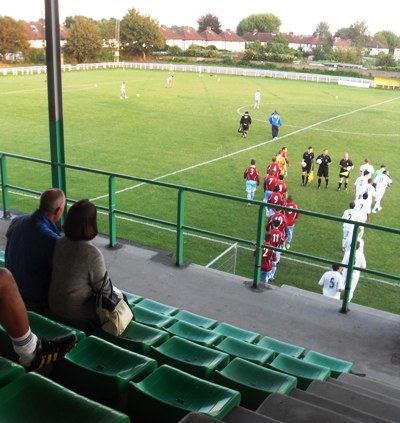 Coles Park nestles amongst a number of allotments half down White Hart Lane, many of the plots disappearing beneath unscripted vegetation. The football ground fits this environment well with weeds allowed to grow arrogant in vast clumps at the car park end. They are the main feature of the three open sides of the ground (aside from a discarded shopping trolley) with a raised stand towering over everything else; the plastic seats on its back row flecked with yellow and green streaks suggesting a rather slapdash paint job,

The officials led the players from the portakabin housing the dressing rooms and the bar across a section of car park, underneath the stand, through the lawnmower shed and out onto the pitch, and the year’s premier FA knockout competitions began in this neck of the woods with the ref’s sharp parp.

For the first quarter of an hour, and despite losing all four of their league fixtures thus far, Bowers & Pitsea appeared to be the better equipped for the task, and yet the first chance fell to Haringey & Waltham; Harry Honesty zipping behind the defence but curling his shot wide of the far post.

Now some readers will now be re-scanning that last paragraph to make sure they read that players name correctly. I can assure you that you have, although I grant you it’s the sort of name you might normally expect to find in a wartime ‘educational’ comic produced by the Ministry of Information. 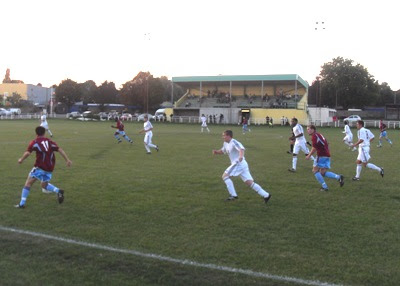 However we had to wait until seven minutes into the second half to witness that first goal, with both sides squandering countless opportunities to light up the first half with a strike. When the goal did come, it was largely as a result of a defensive calamity, a poor backpass latched onto by a Haringey striker who then barrelled into the keeper, the rebound falling nicely for Bassi-Mensah to sidefoot into the empty net.

Quarter of an hour later the visitors conjured up an unexpected equaliser; Alfie Hinton scooping a superb shot into the top corner. Parity, however, was only to last eight minutes, as Joe Staunton ran onto a long ball over the top and lobbed the keeper, the ball making a satisfying ping as it collided with the side of the far post on the way in. 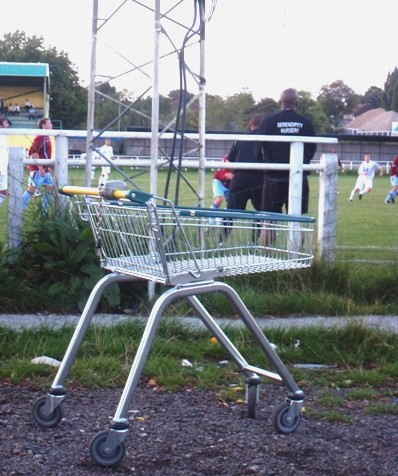 A minute later Bowers & Pitsea were reduced to ten men as one of their number showed enough dissent to warrant a straight red. With their defence looking as alert as the Trojan sentries happy to sign for the massive gift the chap from the firm of Greek couriers had left on the driveway, a subtraction from their full complement was the last thing they needed.

The home side were quick to exploit the extra space, Harry Honesty’s pace causing them all sorts of trouble, the Honest lad adding a couple of extra goals in the final five minutes. In the 85th minute a superb ball across the defence reached Honesty, who cut in with all the time in the world to slot home, before then going about an elaborate dance routine that clearly indicated he believed himself to be playing in front of thousands rather than 73 losers with nothing better to do on a Friday night.

Possibly told by his manager to calm down his theatrics, Honesty proceeded to perform the same routine from inside the technical area, facing down the dugout, five minutes later inspired by having scored the evening’s final goal, turning in the box and firing a snap first-time shot into the corner with a minute to go.

As the final whistle blew, Bowers & Pitsea could only contemplate how they had let themselves collapse so quickly. Such a scene of devastated brittleness was it, it had been like watching a hefty flood ripping through the bean poles and bamboo canes in Coles Park’s neighbouring allotments. Haringey & Waltham could consider the fact that they were a step closer to Wembley, albeit still five further, and unlikely, wins away from the rounds proper.

Fancy the content I have seen so far and I am your regular reader of your blog.

I am very much interested in adding http://dubsteps.blogspot.com/ in my blog http://southafrica-2010-fifa-worldcup.blogspot.com/.

I am pleased to see my blog in your blog list.

Hope to see a positive reply.

Thanks for visiting my blog as well !

Waiting for your reply friend !!!!!

Best observed and funniest Cup report I've read for a while. This is what the old competition is really all about. Love the gags about Harry Honesty, ration books, etc and description of his goal celebrations. And nice pic of the shopping trolley!

I think the trolley makes a nice companion piece to the wheelbarrow-with-a-spade-in-it I once photographed whilst watching Sporting Bengal.

Just added a reference to Harry Honesty and your blog at the end of my most recent post.

Good luck in the next round!