When writing the words “already I get the impression we will prove to be tougher to beat this year than last” in your first reportage of the season, you know there is the danger that your chosen phrasing may well come back to bite you in the arse. Given we have now lost four of the subsequent five games I must tell you it’s like a hungry tiger has had at it on my left buttock.

In the middle of those four defeats was a bosomy 4-1 home win over high flying Conference South newcomers Truro City, currently steaming through the leagues in the attempt to bring increasingly high standards of football to the people of Cornwall. To us hardened to disappointment this was as surprising a result as they come; a surprising turn of events that came out of nowhere, like being knife mugged in a dark alley by a retired librarian who forces you to accept their wallet. 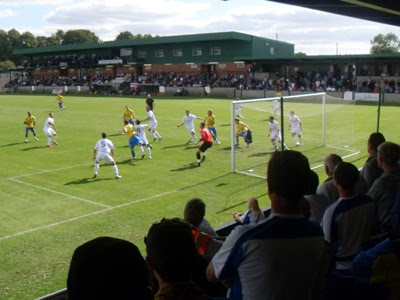 However, as I wasn’t there and thus didn’t bear personal witness to it, I’m starting to think it didn’t actually happen and was a collective hallucination on the part of my terrace colleague Shaun, who was on text alert duties, the Press Association and all other purveyors of supposed result FACT!

Given that the Truro result followed a week of tumult on the H&’Dub message boards, particularly with regards our manager’s abilities in that role, some were given to suggest that ‘perhaps we can leave the doom and gloom behind now...clearly we’ve got the problems sorted’. Making a swift judgment on the basis of one result. You wouldn’t find me doing that, oh no.

However by bookending the bank holiday weekend with a duet of politically correct results so balanced as to seem to be the work of an Olympic gymnast, I guess we can assume Saturday’s result was the anomaly, get back to the curmudgeonliness we do so well and return to the matter of having Shaun Gale tarred and feathered. 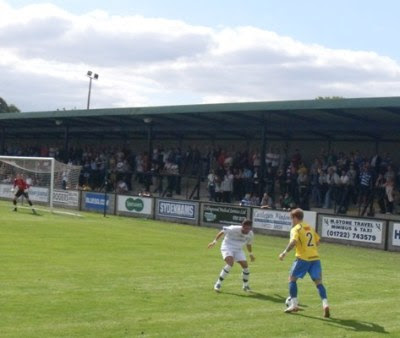 A week ago we lost 3-2 at home to Chelmsford City, a result that flattered us if anything, two penalties giving the impression that we might have a clue as to where the goal was. It was a performance so limp as to require a fitting for an orthopaedic shoe. Surrounding that were midweek surrenders almost equally meek at home to Welling and away to Weston-super-Mare.

Yet it was with that Truro-fuelled glimmer of ‘well, maybe, big maybe, this is a corner turned’ that I headed down to Salisbury, although the main allure was simply that I’d not been there in years. My exile in the grim north, their promotion to the Conference National and subsequent demotion to the Southern League for financial irregularities had meant I’d not visited the Ray Mac since 2002.

I remember seeing a particularly horrendous defeat in Tuesday evening rain, possibly the pivotal game which earned former Chelsea defender David Lee his place in the all-time Worst Hawks XI, the drawing up of which has whiled away many an online forum summer silly season or beano train trip. 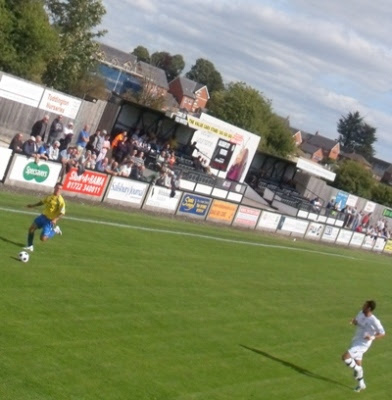 Time was that two sides of this ground were merely sunken walkways, the kind of trench you’d usually expect to see a German sentry poking out of. However, inspired by some time spent in the upper echelons, there has been a considerable upgrade with some shallow terracing, a pre-fabricated stand and a massive scoreboard with a picture of a cartoon snail advertising something-or-other on it taking up the far side.

In the old days, there was so little on that side, opposite the main stand, its defining feature was an old wooden stile, an adornment rather ideal if the football was making you feel like fleeing over the neighbouring field. Frankly, I could have done with access to that stile during the second half of this game. At one point I even considered clambering up the face of the gigantic snail in an attempt to escape.

The sense of foreboding arrived as early as the third minute, Daniel Fitchett put through behind the leaden-hooved Hawk defence with time to slot easily past Nathan Ashmore. For the next 35 minutes, the game ambled along with Salisbury looking relaxed and collected, however we managed to fashion an equaliser. A Sammy Igoe free-kick position like a hockey short-corner was threaded to Steve Ramsay who fired in a shot that was firmly cleared off the line but only in the direction of Wes Fogden and the rebound off his leg bobbled over the line. 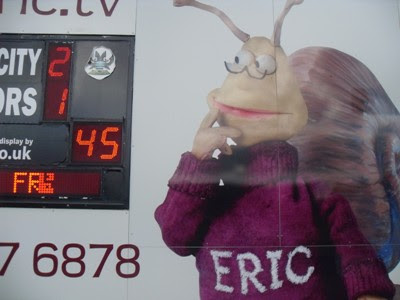 For all of two minutes we looked lively, but nothing kills the spirit like the conceding of a penalty for a ball-hits-arm-at-speed infringement, which is then scored, Jake Reid slotting home calmly to round out the first half.

In the second period, we never really looked at the races, Salisbury adding to their tally twice with headed goals that beat our keeper’s attempts to punch out. They say the essence of comedy is timing and in that respect I’d suggest it shares something with goalkeeping; Nathan’s keeping being so prone to poor judgment as to not be in any way funny. Ryan Woodford’s two-yellow tunneling also dampened our good humour but that’s not to say the afternoon was without entertainment for us travelling Hawks.

However if the best we get from a game is our terrace stalwart Malcolm getting his picture taken with a Salisbury steward who happens to look like Gunsmoke and Gentle Ben actor Dennis Weaver then it becomes clear that requiring distraction from the action may become the standard in the coming months. Mmm, that sounds pretty definitive, and negative this time, so hopefully that’ll guarantee we win the next three games at a canter.
Posted by skif at 8:20 am