In Ayr manager Brian Reid’s programme notes for this first league game of the season, the prior fixtures in the League and Challenge Cups are discussed and he takes time to remark on the “depth of the support on the terraces at East Stirling” which suggests to me that it must have been really wet there.

I can well believe that supporters could be easily submerged given the conditions one associates with a Scottish summer, the kind of which greeted my arrival in Ayr by spitefully opening the heavens for as long as it took for me to walk between the station and the ground, its only intention seemingly to turn my map to mâché. If this was indeed the case, Mother Nature could colour herself successful. 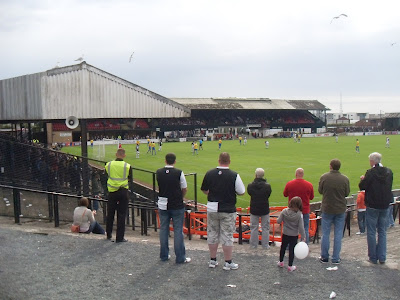 It wasn’t only the rain dropping from the skies that one had to be watchful for either, especially those of us taking residence on the uncovered terrace between showers. Literally three seconds after I had written the phrase “marauding seagulls” in my damp notebook, one of their number unleashed its loathing across my forearm. It may not have then used its wing to point at its eyes and then point back at me, “I’m watching you, fella” style, but the message was pretty clear nonetheless.

Thankfully though I had yet to remove my raincoat and so it took the force of the blast, throwing itself upon this interspecific hate-crime, deadening the discharge, a selfless act for which the hair and skin on my left arm will be forever grateful.

It is difficult for me to paint a fair picture of Ayr given these circumstances as no town looks at its best when clattered by precipitation, let alone seagull shite. I can tell you though that Ayr has a decent record of producing singers for successful bands with Stuart Murdoch of Belle & Sebastian, Simon Neil of Biffy Clyro and Mike Scott of the Waterboys all being Ayrshire men.

Of course Ayr’s most famous son is Robert Burns, once voted as the greatest ever Scot (bitch-slapping a clearly miffed William Wallace into a poor second place) and The Bard once wrote in his poem Tam O’Shanter, “Auld Ayr, wham ne'er a town surpasses, For honest men and bonie (sic) lasses” and it is from this which Ayr take their nickname. The Bonnie Lasses. 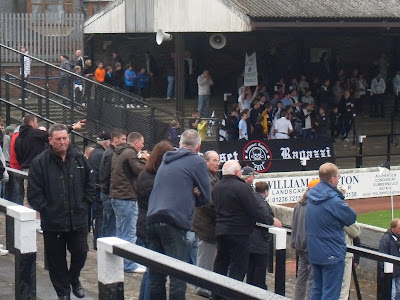 Nah, not really. If only. Ayr are the Honest Men. However, if a bloke has to tell you he’s honest, “honest as the day is long me, mate”, chances are you’ll back slowly out of his car lot and hot foot it to the scared looking young trainee down at the Hyundai dealership, although I’m fairly certain old Rabbie wasn’t picturing this scene when penning his verse.

All this said, Ayr did come out of the seasonal traps unleashing the kind of honest endeavour one associates with a team newly arrived in the division from below. Hamilton Academical, newly arrived in the division from above, were also playing to type, in that they started with a sluggish complacency, and were punished in the 8th minute, as triangle passing between Michael McGowan and Mark Roberts made the Accies defence look like hibernating hedgehogs woken prematurely by a rabid car alarm. McGowan, receiving the ball inside the box, curled the ball neatly past Tomas Cerny to send the Somerset Ragazzi into rapture [see below].

Whilst Ayr attacked the end containing the Hamilton fans, only their younger supporters seemed to stay in position underneath the covered terrace to have their chants amplified while watching their team defend. These fellas, as the massive banner in front of them lays out in plain white n' black, are 'The Somerset Ragazzi' [see above], the latest Italian-style 'ultra' group to take their place in British football grounds.

In the second half, those who had edged up the seagulls’ shooting gallery to be nearer their strike force returned to join them with veteran voices joining the teenage trill under the roof to create a bigger, beefier noise. 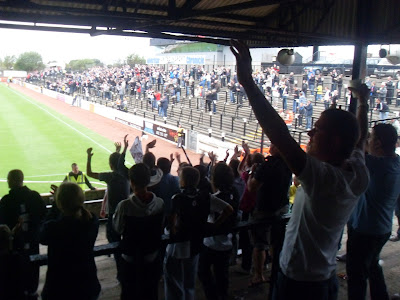 By this time, Ayr needed a little more to buoy them as their lead had been cancelled out around the half hour mark. A fairly innocuous looking long range shot from Hamilton’s Jordan Kirkpatrick had to be finger-tipped over the bar by Kevin Cuthbert. From the resulting corner, Dougie Imrie’s cross was met by heavy duty centre half Mark McLaughlin who crashed a meaty header off the underside of the bar.

It was much the same scenario that proved Ayr’s undoing in the second half also. After 57 minutes another McLaughlin header was saved by Cuthbert. From the resulting corner, Grant Anderson pushed the ball goal-wards which Cuthbert was able to palm away but only as far as McLaughlin who bustled through the six-yard box melee and notched up his brace with another firm header.

As Hamilton had been awoken from their close-season sleeps by Ayr’s opener, going a goal behind themselves brought Ayr back to the table, the game operating at a far greater pace thereafter. However, despite at one point forcing six corners in succession there was to be no equaliser for Ayr, although Cerny in the Hamilton goal needed to be at his best to prevent John Robertson and Alan Trouten claiming a little personal glory.

Despite a poor start and a pressurised finish, Hamilton’s resolve will almost certainly stand them in good stead as they attempt to return to the Scottish Premier League at the first attempt, whilst Ayr would seem to have enough in their locker to ensure they don’t make a similarly swift return to the enveloping tentacles of Division Two.
Posted by skif at 12:01 pm