As I left work on Friday my line manager said to me, “hope your team wins”. My reply was simply, “cheers, but that’s not really the way we operate” and it really hasn’t been over the years. Opening day wins are as rare as stamp collecting Satanists in this world of Hawk, only two coming in our thirteen seasons post merger and neither of those was I personally witness to.

So, at the start of our fourteenth season as a combined unit, I will savour this rarity, this Fabergé egg of an away win, as prior to this weekend, my only experiences of season starts are those where expectations are quickly dampened; heavy home defeats to Tamworth, disappointing draws at St Albans and tense nil-alls with Braintree acting as the soggy tea-towel over my chip-pan fire over the years.

The trick it thus appears is to come in with low expectations. Given we had such a drab campaign last year where we never bettered the 8th place we hit in mid-November, and are continuing to operate on a frugal lets-not-blow-it-all-on-champagne-and-court-cases budget, the excited face of our ambition needs to be cold-flannelled with a tough realism. This, at least, should ensure we don’t end up weaving the same wicker as previous basket cases that have blown through our league only now to languish in much humbler environs. 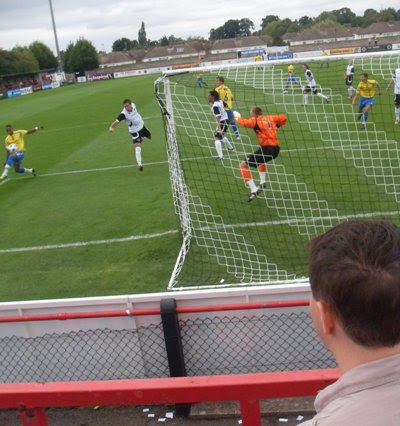 It certainly appeared, as we ramped up to this point with friendlies that we were right to keep our excitement on a low burn, as goals took a long time to come by. However, our heaviest defeat of pre-season was nonetheless the highlight as we stepped in to fill Portsmouth’s shoes on 24 hours notice (when they were stranded in the US whilst on tour) to play Real Betis, a side from the top level of Spanish football. Naturally we were given a seven goal spanking without reply but, given that we had failed to score in five of our seven friendlies up to that point, one would suggest that Betis, when considering how their La Liga campaign is going to turn out, shouldn’t read too much into the result.

Another major part of our summer was a partial re-build, not massively so in totality but we’ve required more re-tooling up front than John Wayne Bobbitt. Mustafa Tiryaki, despite being a disinterested, sluggish presence for long periods last year, has managed to earn himself a chance in the pro game, taking up a one year contract at Tranmere. Meanwhile, Manny Williams and Guiseppe Sole have returned to former clubs, Maidenhead and Woking respectively.

In addition, we have lost first choice keeper Aaron Howe, also to Woking, whilst our skipper Ian Simpemba took a day job managing a golf course in east Kent and could no longer commit to the travelling involved, although how this ties in with his accepting a contract at a Conference National club (Ebbsfleet) that will be required to bus it to Gateshead, Barrow, Fleetwood and Darlington over the course of the season, we’re not entirely sure.

To replace Aaron Howe, Hawk Academy product Nathan Ashmore has been promoted to first choice with Lyall Beazley signed up to cover the gloves. In defence Chris ‘Dutchy’ Holland has moved along the M27 from Eastleigh, whilst our attacking options have been boosted by the signing of Craig Braham-Barrett from Farnborough and Mark Nwokeji from AFC Wimbledon whilst prolific Conference South onion-bag-abuser Warren McBean was signed at such a late hour as to prevent his participation here at Boreham Wood.

However in terms of making an instant impact, one has to look no further than our other new-boy, Lee Peacock, a granite-faced journeyman with over 500 Football League appearances to his name (including spells at Manchester City, Sheffield Wednesday and Swindon) and that impact has come in number of ways. Firstly in terms of his appearance; one cannot help but notice him for the mohawk standing erect upon his swede, the tattoo gallery that is his skin and his general hod-carrier’s physique, all of which suggest a man who winds down by playing drums in a Slayer tribute band.

Secondly he has walked into the club and instantly assumed the role of captain, although given his appearance this may have been largely because Shaun Gale was too scared to tell him otherwise.

Thirdly, well, how does a debut goal within two minutes sound? Needless to say it sounded pretty sweet to us, and looked pretty nifty too, Craig Braham-Barrett’s run down the left finished with a skiddy cross that zipped past Wes Fogden but arrived at Peacock’s probably well-inked feet allowing him to hammer a sublime finish into the far corner. 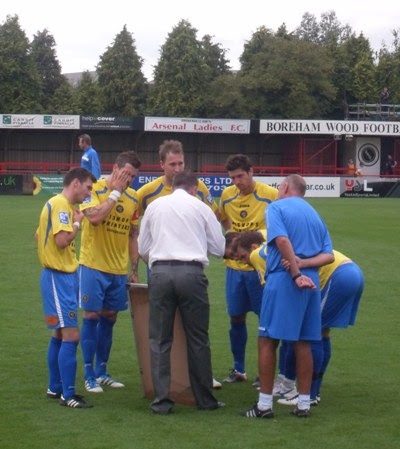 After that, Boreham Wood hitting the post aside, we dominated the first half and spent the interval coo-ing over our new 4-3-3 formation with Braham-Barrett and Wes Fogden playing just behind Peacock. In other trying-new-things news it appears that Shaun Gale has ditched the tracksuit in favour of a shirt and tie for pitchside wear and has also taken to setting up as an illicit market trader on the pitch at half-time [see above]. This may have been less ‘Trevor Francis tracksuits from a mush in Shepherd’s Bush’ and more open-air team-talk though, I grant you.

What was more familiar was the scratchiness of the second half performance, which required Nathan Ashmore to show he has what it takes to warrant the manager’s confidence in his ability as a #1, with a couple of excellent stops.

That said several players impressed and certainly all the new signings did themselves proud, Craig Braham-Barrett being a pacey threat and Chris Holland being just the strong, committed presence we need to fill the gap left by Ian Simpemba. Indeed, he spent more than half the game with a large bandage wrapped around his head to cover a stubborn cut on his chin that made his bonce reminiscent of the Jack Nicholson ‘Here’s Johnny’ scene in The Shining if, instead of the old wooden door, they had used a large sheet of four-ply toilet paper.

As much as the second half performance suggested there is still plenty to do, we nonetheless achieved an away win on opening day without conceding any goals. Given how rare all of those can prove to be over a league campaign, it would be rather churlish to be anything other than ‘encouraged’.

After all, one game in and we lie 7th, higher than we managed in the whole of last season. It might be an early peak but already I get the impression we will prove to be tougher to beat this year than last*.

ADDENDUM [24th August 2011]
*I am minded to revise this opinion given that we then lost the next three games. And counting.
Posted by skif at 7:15 pm