After the flash-bang-wallop-what-a-picture nature of our previous two fixtures, this game was much more attritional; like trench warfare, only without much in the way of the warfare. Personally, despite Maidenhead having a couple of good chances in the first half, one saved magnificently by our reserve keeper Nathan Ashmore, I was never particularly worried that we’d falter.

However it took until the second half to settle ourselves properly with a goal. Merely two minutes into the second half, Manny Williams, despite being clearly unfit, got himself to the by-line and sand-wedged a sublime cross across the box where Stevie Walker met it with a header that looped slowly into the top corner like a balloon in a balmy breeze. 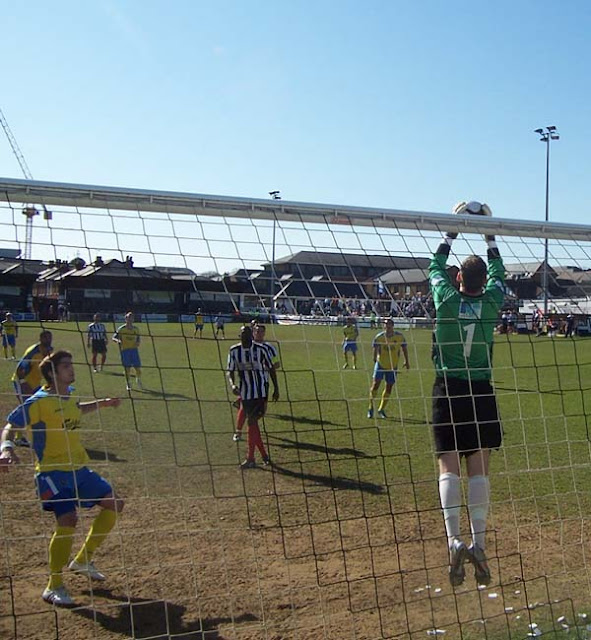 It wasn’t until injury time that we made absolutely certain of the points, Mustafa Tiryaki getting his foot over the ball beautifully to hammer home a shot that could just have easily ended up miles out of the ground. Muz proceeded to bury himself within the bosom of our fans which was probably not the best move given that he was already on a booking. Thankfully the referee was not in killjoy letter-of-the-law form.

Four wins on the bounce then with fifteen goals scored and only one conceded. We are holding up our side of the bargain in terms of an improbable late dash to the play-offs, certainly. Our players could have only done more to advance the possibility in the last fortnight had they treated the squads of Woking, Staines Town, Braintree Town and Bath City to two seriously large Friday nights of expert drinking while sticking to the R Whites themselves.

Unfortunately though, similar can be said for nearly all of our rivals. Four team names (in addition to our greedy two) highlight the fact that there are a hundred million variables involved in the race for the final two unconfirmed berths in the end of season extras. Indeed, this piece is likely to use the word ‘if’ so much I’ll be forced to give a partial writing credit to Rudyard Kipling.

So, here goes. If Bath City and Staines win their games in hand on Tuesday evening, we would need Bath and Braintree to lose next weekend, and hope that Staines and Woking draw their games or worse.

If Bath and Staines lose in midweek, and Braintree lose next Saturday, we would need one of Bath or Woking to not win next weekend and then we would join the one which did.

There are goal difference issues, but I won’t bore you with them. Our +14 in the last four games has to a large extent neutralised what was a substantial deficit anyhow.

Yet, the only factor I’ve not mentioned thus far is that we need to do our bit too. In these scenarios above we, of course, need to win. No cakewalk either. We would need to beat Chelmsford (in 2nd) who are assured of a play-off spot. However if they lose to us and Dover (in 3rd) win, they would forfeit home advantage in the play-off final if both they and Dover were to qualify for it from their respective semi’s. As such, we cannot rely on them resting the first team and fielding their under-12’s.

In theory we could end up in the play-offs with only a draw if, and this is beyond credulity of course, Woking lose their final game, if Bath lose both their final games and if Staines do not win either of their final two games.

Still to be in a position to talk this way with just one game to play is something we would not have even thought credible at Christmas. So I am grateful for the little bit of excitement it has brought to our lives, a little tension that was not the type we had expected in the deep midwinter when the relegation zone was sniffing at our ankles like a dog desperately running out of latrine options.

Whatever happens it should make for a great atmosphere at West Leigh Park next Saturday and our players are clearly up for doing their bit. Hopefully there are four teams out there in the Conference South who can make like an amnesia-afflicted milkman, when it comes to locating their bottle.

Depressing enough if, like me, you occasionally have to make the trip to Maidenhead because it's your home town and your parents still live there. To make a special trip must truly seem like crossing into barbarian territory - but at least the ground is as close to the station as one could imagine.