“and you may find yourself in another part of the world”
- Talking Heads, Once In A Lifetime

You may ask yourself, how did we get here? Right amongst an exciting end-of-season play-off-chasing run-in, despite the fact we managed only one league win in the four month period between mid-September and mid-January. We’re taking the New Labour route to vanquishing murky memories of discontented winters, clearly.

You may ask yourself, how did we work this? A team that spent six months after Manny Williams initial net-thwack fury looking more than a little gun shy, now with 13 goals in three games. Given that goal difference may well be a factor come the end of the campaign next week, we’re certainly doing our level best to catch up the pace.

And you may ask yourself, was this our beautiful ground, playing witness to the long since crowned runaway champions Newport County being torn violently asunder this past Saturday? Well, you won’t be able to ask me about it as, sadly, I wasn’t feeling up to the journey home, so missed the whole thing. Needless to say the knowledge that I’d missed an emphatic 4-0 win against the best team in our league did little to bring me out from under the weather on Saturday evening. I could have delighted in the result in the context of the season of course, but I can be a curmudgeonly and self-pitying swine when not in the rudest of health. 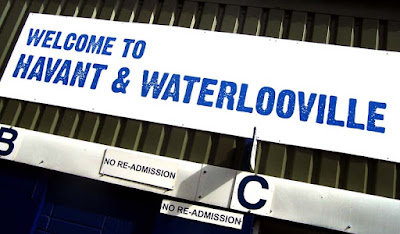 Still, if anything is going to make you feel better about missing a 4-0 home win, it’s turning out at a 6-0 home win but three days later. While Weston-super-Mare may be dreadful and already relegated (barring their usual end-of-season saviour that has been clubs failing their ground grading or merely retreating and regrouping to the lower ranks), they showed us at their place only three weekends ago that they can be rather awkward even if they aren't very good. Indeed, their recent form, whilst short on points, has also been light on thrashings. A team not to be taken lightly then and cautionary notices were posted on our forum prior to the game. Rightly so, now is not the time to strut around with honking hubris, there’s still plenty of work to do.

As such, a third minute opener was in ideal settler. Mustafa Tiryaki’s recent form has been astonishing to the point of being a kind of matching book-end to Super Manny’s opening month. After his hat-trick against Weymouth, and two red hot strikes against the marauding Welsh, it was our Turkish terrorizer who kicked over the first domino by powering through the Weston’s defence and firing under Kevin Sawyer’s hefty trunk (and comparatively titchy head) as the keeper thundered to the turf with an already exhausted air of lumbering futility.

Twelve minutes later, centre half Ian Simpemba fancied himself as a bit of a Paulo Di Canio figure (minus the fascism, of course) with an immaculate striker’s finish, crashing home from close range with a scissor volley.

Just after the half hour, Wes Fogden was felled in the penalty area. It’s always Wes, isn’t it? He goes down in the box so often, I am constantly fighting the urge for a filthy simile. This is not to call Wes a cheat or owt; it just appears that clumsy tackling appears drawn to him like calves to the udder. Despite the fact that he appears to have been carrying an injury for some time and his form has suffered as a result, Manny took on the responsibility, and sent Sawyer the wrong way.

Wes, as you might expect from someone who had been presented with his third player of the month award in a row prior to kick-off, was playing exceptionally well and fortune favours the err.. good. His goal just prior to half-time would probably be chalked up as an own goal if televised as the deflection off a defender’s leg was so wicked it came with its own pointy hat and broomstick.

His second, and our fifth, after 54 minutes was much more the product of good work than good luck though. Having drawn Sawyer towards him, the sack-a-potatoes custodian was stranded as the ball bobbled loose. Muzzy Tiryaki threaded the ball back to Wes, who was able to relatively calmly walk the ball in.

In all honesty we could have had loads more goals, with Manny Williams and Stevie Walker squandering great chances. Both can be let off though, what with Manny’s penalty and the fact it was Stevie who scored our sixth and final, neatly tucking in a rebound to depress Sawyer even further.

So, there we have it, a six goal haul for the Hawks and we’ve not had hundreds of them in the league. In our twelve seasons, there have been only five. A 6-4 away win at Fleet in our first merged and promotion winning season; a 6-0 thumping of Burton Albion in 1999; 6-2 against Folkestone Invicta in 2003; the same result away at, titter, Eastleigh in 2006 and finally another 6-0 against Hayes in 2007. Of course, there was absolutely no real point to me listing all of those, but it was too good an excuse to remind the world of the times we put 6 past our rancid local rivals and also against a club now plying their trade in the Football League, who were managed by current Championship gaffer Nigel Clough at the time.

Those were some good times, and so is the right here and now. All of a sudden it does NOT feel the same as it ever was, or at least as it’s been for the last two campaigns. This is a thrilling ride, and even if it ends being an ultimately fruitless effort (those snookers still being required in addition, probably, to the full remaining six points), this genuinely does feel, although I am now conditioned to say this with hesitation, that this has been a proper corner turned by this football club.

Current league table
Posted by skif at 8:20 am