...and so the scoring began in the 20th minute courtesy of a woefully underhit backpass that trickled to a halt like a train faced with a forthcoming six foot snow-drift. Warren McBean ran off with this gift of a free ball, like a kid whose just found a Tesco bag full of well thumbed copies of Razzle in the woods behind their house, and rounded Nathan Ashmore to score.

Then, on 35 minutes, our young centre-half Sam Pearce met a cross with a solid instep to fire a quality shot firmly into the top corner. Sadly, it was a Chelmsford cross. So, there we were barely half an hour into a literally must-win game against a team already assured of a play-off place and, therefore, probably quite good, down to the tune of two goals, both of which we had, essentially, scored for them.

It was at this point that I and some of my terrace chums turned to each other and began discussing all the reasons being in the Conference National would have been dreadful and why the Conference South is great. The kind of thing you don’t do when you feel the day is going to go your way. One resigned retort to a little bit of ‘you never know’-style geeing up was “yeah, but we needed a miracle in the other games and now we need one in this game.” Within a minute of all this, one of those wished for miracles began. 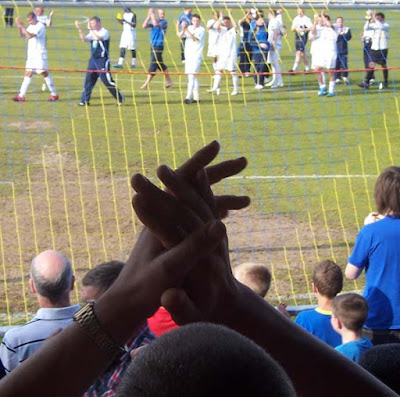 And it began with a pretty phenomenal kinda goal. Wes Fogden, who has made our Player of the Month award so empathically his territory in the past few months that one imagines he must have repeatedly urinated on it, lobbed Chelmsford keeper Ashley Harrison from a fair old distance. Beautifully pitched, it was as easy on the eye as a view across a lush green valley.

At this point the belief started to surge but so did the knowledge that the way of the scores elsewhere meant that even if we were to win that we couldn’t afford to win by just one goal, and thus went in at half time with still three to score. Impossible against a side such as Chelmsford, surely?

Thankfully the kind of turbo charge that has rocketed our vaguely implausible run to play-off contention from the drab environs of Nowhereville was still in our boots as we came out for the second half. Only seven minutes had elapsed before we were awarded a penalty. Needless to say it was Wes Fogden who was tripped to win it; this passage of events is as much tradition for us as a Turkey dinner at Christmas.

As I’ve said before, Wes is a kind of penalty-award soothsayer, putting himself about in bad tackle country and drawing out the nasties like a tighly bound wound dressing. It probably helps that when defenders legs come near, Wes’ evasive gait is much like that of those thin wooden puppets that don’t really have knee and elbow joints. As such, when he is felled, he goes down as though his strings have been cut, ending up on the floor looking like a pile of sticks blown over by a stiff breeze.

Manny Williams stepped up to take the kick and not being in great form, one no longer feels that confident when he does so. Yet the trick for me was just to stand at ground level behind the goal and just stare at the ball. After that, I just knew it was going in and Manny pushed it beautifully into the bottom corner.

Yet still, not necessarily enough. So another penalty helped with that. This time Mustafa Tiryaki was brought down as he attempted to round the keeper. Again Manny went to the keeper’s left but further up this time, curled beautifully inside the post which would have left the keeper with no chance even if he’d somehow manage to replace his gloves with a set of Kenny-Everett-Let’s-Bomb-Russia oversize hands.

However, even this wasn’t the end of it with young Wesley scoring another goal, tucking in a cross at the back post to make it five. Yet try as we might we couldn’t score the main goal we needed i.e. the one for St Albans City at Bath. We knew Woking would win, given they were home to stricken Weymouth, and assumed correctly that Braintree would lose to champions Newport County so Bath’s was our pivotal result. 0-0 was all they needed, was what they got, and our magnificent final few weeks was all, in the being-in-the-play-offs respect, in vain.

We finish sixth, one place and one single point outside the need for further football this season.

Disappointed though? Not a bit of it. There has been time enough for that this season, I fully intend to bask in the glow of a garish, outlandish run of winning form, in the anarchy of 21 goals in six April games and in the eccentricity of a season that refused to fizzle out.

Further words on the season as a whole will follow next week.

Final league table
Posted by skif at 11:47 am