Today’s game was one of perspective coloured by bias. Our view would be that that the referee’s outlook was as clouded as our own, which is not want you want in a neutral official, particularly when he is prepared to strike an draconian tone with your club, but not the opposition in similar circumstances. Welling will no doubt feel that we were a bunch of thugs that needed taking down a player or two (in lieu of pegs).

By half-time, we found ourselves a goal down through a seventh minute penalty converted by Lee Clarke, and also two men light with Mustafa Tiryaki and Ian Selley both receiving two yellows each. In fairness, Selley’s tackle that prompted our second tunnelling a couple of minutes after the first, given that he knew was on a yellow, was reckless, but his first caution was softer than a chamois bum cheek.

It felt much the same for Muzzy Tiryaki in that he didn't heed the warnings and was thus worked over pretty effectively by the Welling side who knew how to convince the official that Muzzy’s intent was brutish. First of all Welling keeper Charlie Mitten (taking time out from his day job as a glove-maker in Trumpton) made the most of Muzzy trying to untangle himself from the grip of the prostrate keeper’s legs, leading to the first yellow card. 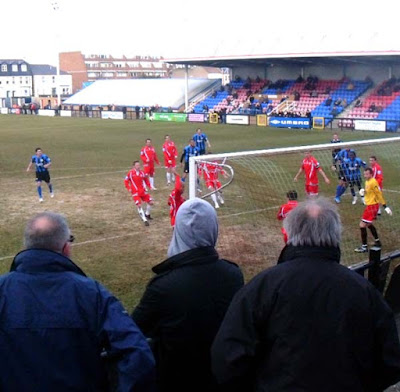 Our supporters let Mitten know in no uncertain terms that we weren’t impressed. Some of the remarks that flew his way from then until the end of the game I think were, well, a little disappointing, let’s put it that way, but funnily enough it was actually his being told by one of our fans in a relatively calm voice, “I really thought you were better than that Charlie” as though by a kindly but wearied schoolteacher, that lit the touch paper that eventually caused him to lose it and eventually start barking “f*** off you fat c***” with spittle catching on his lips as he did so.

However despite our occasional propensity to be a bit OTT behind the goal, there was also plenty to be proud of. What would have killed the game even more than a one-eyed official was us getting on the backs of a side already handicapped to the tune of four legs. Instead we sang and encouraged and were rewarded with a display that makes the chest swell with pride as though our hearts were a balloon and the performance a hand pump.

It is an odd feeling to walk away from a ground buoyed by a 1-0 defeat but the talk in the burger queue at half-time was of hands being ripped off for keeping it below four. However, even with nine men, we often made their defence look like the one that was stretched, and almost pinched something. During the ninety minutes we hit the post twice and had a shot cleared off the line and created more chances with nine men than we did with a full complement at Hampton & Richmond the previous Tuesday.

The recent John Terry furore made it sound like the position of captain is vitally important. It’s not really, not like it is in cricket anyway, but what you want from your captain in the sport we are discussing here is to lead by example and perform with strength, dignity and a never-say-die attitude. Ian Simpemba ticked every box today, and we should also enthusiastically applaud our young reserve goalkeeper Nathan Ashmore for coming in following Aaron Howe’s illness despite playing virtually no serious football this season, and turning in solid, nerveless performances. He made a superb and virtually improbable full-length save late in the second half here and did just the same at Hampton in midweek. However it seems wrong to single anybody out today.

Well, except the ref, of course.

Our unlikely late charge in the direction of the play-offs has been stymied by this and another recent defeat at home to St Albans. These followed an unbeaten run of seven games that, although largely not classic displays, got us believing and enjoying again.

A particularly bright aspect of the post-snow resurgence has been the efforts of midfielder Wesley Fogden. Despite apparently being named after a minor character in Last of the Summer Wine and having such an enthusiastic proboscis you could spear a bison with it; he has fast become a terrace favourite. He has a Willo-the-Wisp-ish gait with the ball at his feet which means he draws the brutish kicks of brick-faced opposition doggers like a magnet drags iron-filings round a bit of paper. However he just keeps getting up like a bionic man, ignoring the bruises to be involved in a great many of the chances we create.

Despite Wes’s efforts, if we are to sneak in the play-off back door like an opportunist thief with designs on your kitchen radio, we need to be creating a great many more chances and being less reliant on Manny Williams to finish ‘em, particularly as Manny has often looked like a player burdened by over-responsibility since the tremendous chaos of his early season goal-fest.

As it stands we are seven points away from the promised play-off land, with a couple of games in hand on some of those above us but, with the amount of sides above us in the mix, one would image that we are still left requiring snookers, especially when you consider we still have to face champions elect Newport County twice.

Then again, given they have only lost once this season, perhaps the traditional runaway-leaders-wobble is a little overdue.

Watch this space, the next report will come from Weston Super Mare in three weeks time.

"softer than a chamois bum cheek" - genius. Though my favourite complete sentence in the report was: "Despite apparently being named after a minor character in Last of the Summer Wine and having such an enthusiastic proboscis you could spear a bison with it; he has fast become a terrace favourite."

Forgive me if I'm way behind the time here and haven't been reading half as regularly as I should have been, but is the Ian Selley who was double-yellow-carded here the very same Ian Selley wot once turned out for the Gooners?

I made an allusion to the fact in a previous report that we had signed someone with a Cup Winner's Cup medal but never specifically mentioned the Arse I don't think, so you are excused any oversight.

Oh wait, actually I did. Your pardon is withdrawn! ;0)

So has he actually been any good? Never really established himself at the Gunners, if I remember correctly. A solid if unspectacular midfielder, a bit like Steve Morrow (minus the getting dropped on his head by Tony Adams bit).

Well, his arrival co-incided with the start of our 7 match unbeaten run (now ended). I doubt he'll leave here a legend but he was definitely the right player at the right time for us. A proper centre-mid after many months of shoe-horning a centre-half in there.

In terms of establishing himself at the Gunners, the fact that he's been in the lower-leagues for some years now probably tells you all you need to know.