Given that we are thousands of murky fathoms beneath what might be considered ‘senior football’ with this game what, you might well be wondering, drew me to it? Quite simply, ease. First of all, the game was kicking off on a bright (but nippy) Saturday morning at 11am allowing for that ideal weekend combo of live football AS WELL AS loafing in front of Jeff Stelling and a cast of ex-pros each taking it in turns to call out Paul Merson for having the same intellectual capacity as a polystyrene swimming float.

Secondly was the handy location. Turns out Mile End Stadium (home of Sporting Bengal and Bethnal Green Uniteds) isn’t my nearest action after all, it’s the 3G pitch at Haggerston Park, on my doorstep to the point of resembling a fresh Yellow Pages. Honestly, it couldn’t have been much closer if the midfield battle had taken place up and down our hallway.

As such I was able to turn up and buy a programme and still have enough time to sit on my own sofa to read it. After all, why hang around at the ground? The facilities at this level will of course be minimal. However, the tea ladies with home made confections were out today as this fixture was part of a regular series of ‘groundhop’ games encouraged by the Middlesex County League to up attendances. I’m not sure I count as a hopper anymore, with only the occasional bit of neutralling, but convenience is clearly a conduit to unpacking one’s mothballed anorak. 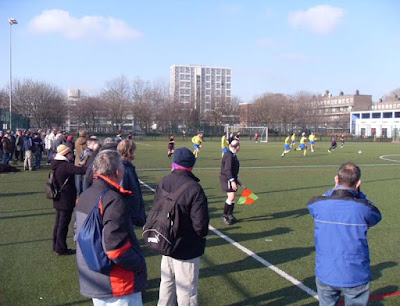 The irregular incentives to hoppers are two-fold, i.e. the guaranteed issuing of a programme (as many Saturday afternoon box-tickers won’t attend a game unless they know they’ll get one), and also the early kick off so they can ‘double-up’ with an afternoon fixture elsewhere. Indeed, amongst those lining the side of the pitch, there are plenty ‘talking hop’: “Vallance’s game’s moved to Victoria Park, but I’ve been there”; “might do QPR”; “don’t like to do floodlit gaffs on a Saturday ordinarily”

Those who’d set their plans for the afternoon in stone were able to peruse the programme which, as is often the case the further away from the Football League you get, was far from formal. In the player pen-pics section, striker Al McQuade was described as a “banker by trade, Alan [therefore] has the most impressive brains to income ratio in the team.” He comes off slightly better in Adam Sturdy’s ‘Captain’s Comment’ notes, described as “the wee man…with pistons to die for and a face that proves there is a God (a direct quote [from Al] by the way).”

Elsewhere we learn that midfielder Roman Caban “insists on dynamic stretching before the game and multicoloured underpants afterwards” and that left-back Mark Thompson “loves … buying shots in pubs for people he’s never met in an attempt to win friends and popularity. Hasn’t worked.”

Manager Ben Watson’s notes are much more sober and reveal that the use of this artificial surface (set inside a cage, giving it the kind of Hulk Hogan vs Andre The Giant at WrestleFest '88 ambience sadly lacking at most football grounds) has been essential to ensure his side can return to play in the borough they notionally represent after spells in Southgate and Enfield. The potted history also informs us that this is their first season in the Middlesex County League structure after twenty in the London Commercial League, and three in the Northern Suburban League. For those initial three years following formation they were known as the much less snappy Hackney Young People’s Unemployment Project. Stitch that onto your tracksuit, Keith. 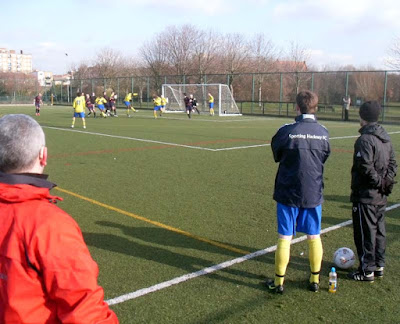 Plenty to learn then but come kick off, attention was quickly drawn to the game, with the home side taking the lead after only 20 seconds, Al McQuade stealing in to catch the St Johns defence cold to the point of being trapped in a chest freezer. Only five minutes later, Hackney had their second. From a St John’s corner, Hackney motored out of their box before a long ball split keeper and defender allowing McQuade to steal in and flip the ball over both their heads.

At this point, it looked as though Sporting Hackney had club records in their sights; however it wasn’t until the half hour that Hackney had their third, Sion Jones breaking down the wing and sidling into the box before slicing through the defensive retreat with a ball McQuade could effortlessly side foot home to complete his hat-trick. However, the game was not as over as it looked but then, I guess, if the away side can cope with their shared disability, then a three goal deficit should represent no biggie. Nevertheless what was to follow was astonishing if only for being so unexpected.

The fightback began in the 41st minute, when a swift first-time shot was thwapped into the far corner past a badly positioned Mark Chamberlain in goal. It continued just prior to the hour when a flick header took such pace of a St Johns corner that Alistair Daziel mis-timed the swing of his leg but was able to hang his foot in the air long enough to connect sufficiently to drop it into the corner. 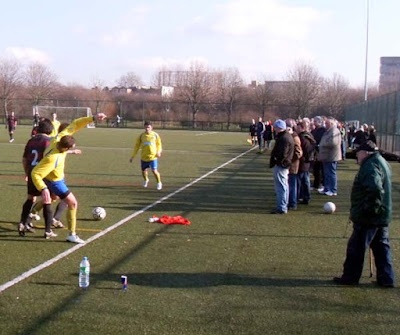 Unsettled by all this, Hackney sent on three subs at once and a period of end-to-end action followed, with both sides going close, a Hackney sub hitting the bar and St John’s squandering a great chance. Not long after though, the away side were awarded a penalty and they were able to slot the equaliser into Chamberlain’s left hand corner as he dawdled awkwardly in the opposite direction, as though pissed-up and about to tumble into a hedge.

In the final ten minutes, the tempo remained rapid with Hackney heading over the bar from close range and then, with the game getting increasingly fractious, having their vice-captain Marlon Sharpe sent off for a raised elbow. Into added time and St Johns had an effort cleared off the line, but Hackney worked the ball straight up to the other end, crashing a shot off the bar which was then followed up by Sion Jones for a cheeky tap-in.

With only enough time left for St Johns to kick off once more, they had been pipped with the penultimate touch of the game. After their never-say-die efforts, defeat was as tough to swallow as a dry Rivita sellotaped to a brick and they collapsed to the fake turf in despair. Considering they prop up the Division One (Central and East) table with only four points from eleven games, one imagines their season has seen a lot of disappointments like this. The three points for Sporting Hackney however mean they are well amongst a promotion race limited now, it appears, to themselves, Springfield and Hendon ‘A’.
Posted by skif at 4:17 pm

I once played at this ground in my younger days and really enjoyed it - but on returning to the car park, several car had been broken into. I still work realtively nearby and Hackney is less of the bandit country it used to be thankfully.