Of course, some years ago it seemed like every other week, we were preparing to saddle up the horses for another gallop out to beano country. Those were, if you will, the good ol’ days. All the cast iron, concrete, top rung ‘legends’ of our young club (James Taylor, Paul Wood, Tim Hambley) were playing together and the football served up under then joint gaffers, the bizarre coupling of Mick Jenkins (a Cuprinol-tinted wide-boy with years of non-league know-who) and Liam Daish (a classy-centre-half-cum-steel-eyed-tough that turned out in the Premiership and won Irish international caps only a couple of years prior to turning up in defence at our dump) was pretty pleasing on the eye by-and-large.

Whilst our cup runs ranks as some of our finest ‘moments’, in terms of an extended period where joy was rarely confined, my mind immediately races back to just under a decade ago. We won a lot of games and went on a load of big trips to relatively exotic parts of the country in watching us do so, the train trips leaving home at six in the morning being particularly good fun. I may not drink anymore but the sense of satisfaction of turning up at your destination before the pubs open still remains.

Beanos are fewer these days largely because in terms of ridiculous trips, the Conference South is much more sedate than the old Southern League, seemingly endless trips to the London orbital replacing the big days out to places like Burton Albion, Kings Lynn, Merthyr Tydfil, Tamworth and Moor Green. It is perhaps poignant to note that two of those clubs no longer exist, one is apparently about to go bust whilst one is in a shiny new stadium in the Football League.

You might think all the metropolitan action would be ideal for me as a London dweller but, well, I like an excursion, to get the feet out from under the coffee table and sod off somewhere, even if that’s to potentially be disappointed at the hands (well, mainly the feet) of my football club. 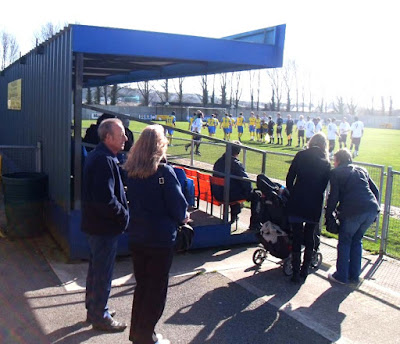 Thankfully today, it was all good. First of all, my solo excursion on an advance cheeky cheapie ticket from London happened to bump into a gaggle of beano-ing chums up from the South at Temple Meads, leading to a big Bristol breakfast then a collective tour of Weston’s seafront bars, chain boozers and on-platform train station juicers. The latter, popped into whilst waiting for our train back, contained the most odd-looking, bug-eyed, tooth-jutting collection of bridge dwellers this side of a Lonely Planet travel guide written by the Three Billy Goats Gruff. Needless to say, this was our favourite of the lot. Who wants the anodyne nature of a Yates’ Wine Bar when you can be stared at by a bloke with a lopsided gumline and tattoos peeping out from the collar of his sweatshirt?

In addition, an away win, albeit nervier than it probably needed to be. Possibly because the collective feeling amongst our support was that we really should just have to turn up to collect three points from a Weston side without a win in 19 league games. This may have transmitted itself to the team, particularly after they saw first hand during the opening 45 minutes just how poor the home side were.

However despite this, whilst we should have been pounded them so thoroughly in the first half that you should have only been able to see their foreheads and hair-do’s peeking out of the turf, we only went in at half-time one goal to the good. That goal came from Wes Fogden, poking home [see below] following an extended bout of head tennis keepie-uppie dinks inside the box that began to resemble the constantly interrupted skyline at a beach volleyball tournament. 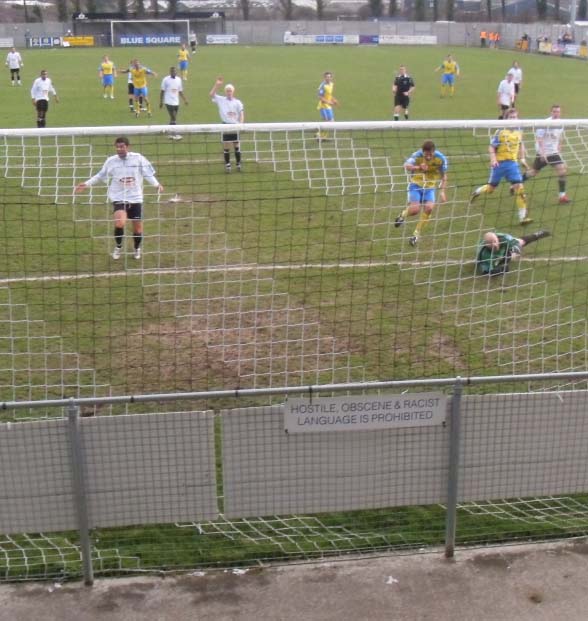 The goal aside we had the ball in the net on three other occasions but all were disallowed and, in fairness, were uncontentious decisions. We also gave the goal-frame a good solid ping thanks to a gorgeous shot from Bobby Hopkinson that just kinked away from being a goal-of-the-season contender just at the last second.

In his three games for us in the last week, Bobby has been excellent. He is squat barrel of a boy, but plays with the mature head of a veteran, albeit a mature head that has the face of a 14-year-old stapled to the front of it. He’s not really our player though, AFC Wimbledon have claim to him but allowed him to play for us for a bit. They had intended to recall him for this weekend but a loaning technicality means we have to keep him for the rest of the campaign which, along with Ian Selley’s return from suspension, is excellent news.

Less good news was that Manny Williams limped off during the previous Saturday’s home game with Staines. However, our bit-part strikers have stepped up in his absence. Last Monday night, George Lopes, a non-contract Portuguese who has hung around in the background like a session bassoonist, came off the bench with nine minutes to go to score an equaliser against an always awkward Braintree within three minutes of jogging on. 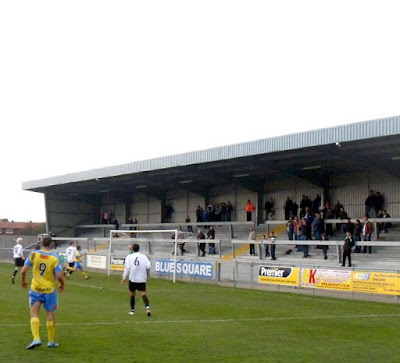 Last Saturday, it was Albanian-born Swede Alban Jusufi who announced his scoring arrival in thrilling fashion. Having been doled out sparingly since turning up, he had become known behind the goal as ‘Dr.’ or ‘the mysterious Kosovan’. Not so mysterious that a medley of his goals in the Albanian and Swedish leagues aren’t available on YouTube though.

Having come off the bench he fired home a fierce shot off the inside of the post in injury time to sort us out with the 1-0 win against a stubborn Staines side that the gutsy performance from our depleted, exceedingly young side had deserved.

In addition to these cameos, Mustafa Tiryaki stepped up to the plate here at Weston to lead the line on his own in the first half and to put in a committed shift in the second that was eventually rewarded with a goal. However for that we were also indebted to Weston keeper Kevin Sawyer, whose considerable midriff bulk is topped off with an incongruously tiny head, giving him the look a salted caper sat on top of a soggy sandbag. 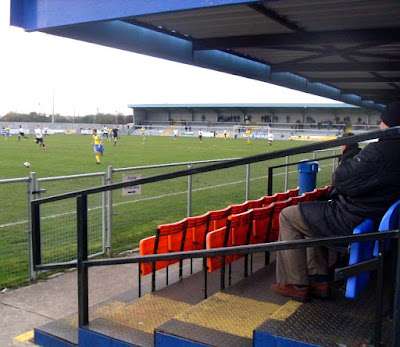 His quick free-kick got caught up in the downfield retreat so that Muz and Academy striker Liam Sewell were able to break away, exchange passes and allow Muzzy to round Sawyer and slot home. Sewell has also been great when called upon, he came on today for Luke Medley, a young professional footballer on loan to us from Barnet.

As my terrace colleague Barry pointed out, give someone unfamiliar with our mob the choice between picking the young full-timer and the green Academy lad, the majority would probably pick Sewell as the loanee. He shows 100% commitment and not a little skill (one sliding trap to stop the ball disappearing for a goal-kick was particularly impressive), where Medley can be good but more often than not appears to have all the get-up-and-go of a golf-buggy upturned and half-submerged in a water hazard.

If we are serious about making up the five point gap between us and the play-off pack in the remaining six games then we would be wise to learn from the sticky patch that occurred following our second goal, as we allowed Weston to get back in it with ten minutes remaining, through a goal by Josh Klein-Davies. Klein-Davies then had to be stretchered off having injured himself in the scoring, and this probably took enough wind out of Weston’s sales to nullify their threat.

So, thankfully, we held on. Beating the forlorn clubs is vital when we still have the top two still to play at home.
Posted by skif at 12:27 pm