I can’t help but like Mick McCarthy, juxtaposing his ageing matinee idol hair with a voice that should really be saying sentences like “’Eck, ee tha canary dead? Tha would best get thee aat” or “I thought she were passed calving, vet’in’ry.” I guess it’s because I like managers who don’t come out with the same old bland phrases, which is why I also like the fact Neil Warnock still gets work. Rather than being a firebrand though, Mick’s wit is so dry you could sand a shelf with it. I particularly like a couple of recent examples: after losing to Burnley, “If I’d put up the number 11 in the second half, they might have all come off” or, on getting another chance to manage in the Premiership, “Yes I’d love it – win four games before getting sacked at Christmas and then go on holiday.”

So after a mid-season period that saw them have the kind of elongated wobble you usually only get on a cheap dinghy in a rip-tide; where it looked as though their astonishing early season form (winning 15 of their first 19 games) would be for nowt, I couldn’t help but admire the ruthlessness with which they took apart the forlorn, stricken Southampton. Frankly it was like watching a hungry lion in a cage with a drowsy goat. 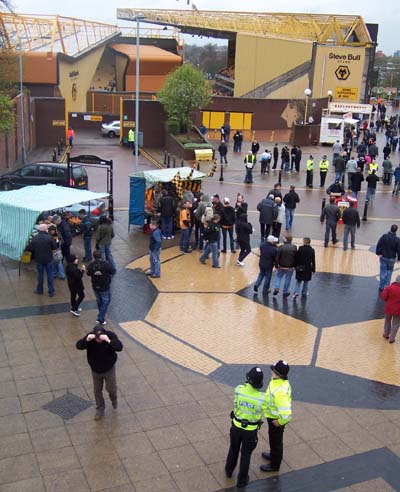 After only 38 seconds, Sam Vokes bundled in from a Dave Jones corner with his head. Five minutes later, Jody Craddock did much the same [see pic below]. Then, with only 18 minutes gone, Dave Edwards was felled in the box by Marek Saganowski, Jones crashing past Kelvin Davis from the spot. All this occurred with their main strike partnership of Chris Iwelumo and Sylvain Ebanks-Blake missing through injury. After this, the Wanderers decided to wander a little more languidly, saving themselves for the remainder of the run-in. Still, for all the quality on show, my admiration for Wolverhampton’s mercilessness felt a bit odd really as, between the ages of 8 and 20, I followed Southampton.

I only got to about 15 games at the Dell in that time, partly due to my age and partly due to the fact I lived in Havant. This being near Portsmouth did bring its own problems, but it was all down to the fact the eight year old me got into football during the 1986 World Cup, loved Peter Shilton (despite his fondness for a perm) and he played for Saints at that time. The fact that he sent me a signed photograph, when his Portsmouth counterpart Alan Knight did not, sealed the deal. A little ironic then that I’d later watch Alan Knight playing in goal, and then coaching keepers, at the club I would properly love. Now although I took it very seriously at the time, so much so that the 11 year old me burst into tears after listening to the League Cup defeat to Oldham Athletic on Radio Solent in the 1989/90 season, it all seems a bit incompatible now that that was the same me, a wearer of red-and-white replica shirts as recently as 1999. Once I was hooked by Havant & Waterlooville though, it wasn’t a case of keeping Southampton as my ‘League team’; the disconnection was complete and instant.

At that stage it was certainly no protest against the greed and arrogance of top-flight football, even if I might feel a little bit like that now. I guess supporting a team in a city you only know through shopping trips with your parents and, latterly, evenings out with friends to see less celebrated touring bands at the Joiners Arms, was always going to be a bit flimsy. These days news of Southampton wins or defeats has no affect on me whatsoever. It’s a result I look for, but only in the same way that those of Leyton Orient, Montrose, Prescot Cables and Cammell Laird also are. On this evidence, the ability to care about a football club can indeed be switched on and off as easily as a desk lamp.

Perhaps a good example of this was the chap I was sat next to at Molineux. I say sat, I was in the Jack Harris stand with the Wanderers’ vocal hardcore, who stood when the player’s came out before kick-off and remained in that position until the final whistle. Clearly this is a battle the stewards conceded long ago. The young lad to my right noticed my note book and started chatting to me about who I supported and seemed pretty well informed about the H&W. This was probably because he was from Romsey in Hampshire. 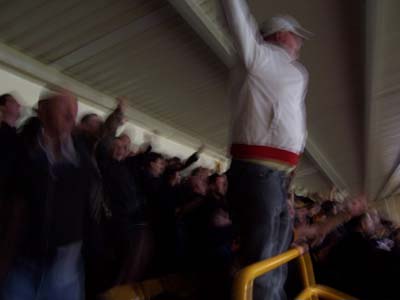 “Why the Wolves then?” I asked him and he responded that Sam Vokes was his cousin and he’d got into it that way, having previously followed Bournemouth when his big cuz was there. Still, for someone following a player first and foremost, he was certainly keen to get amongst the singing, starting chants including a tune that suggests that one should “always shit on a Tesco carrier bag” referring, I assume, to rivals West Brom’s home shirt.

Some would spit at the suggestion one can easily change teams but me and my neighbour here would suggest otherwise. For me it was a case of discovering non-league football, following my home-town team and getting to know some hardcore fans so that there have always been plenty of folks to go with, home and away. For him it was clearly a family affair, possibly along these lines: “Well, I’m at the Wolves now, young ‘un, so support them or I’ll tell Auntie Jean, I mean yer Mum, about all the jazz mags you keep in that shoe-box.” “But…but…you gave them to me, Sam.” “Yeah, well, whose bed are they under? Now here’s your complimentary for the Preston game, make sure you start a song about me.” 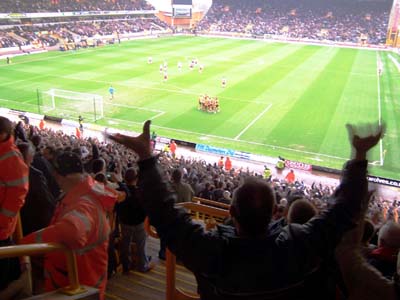 So, despite my history, I was a genuine neutral for this game, and I couldn’t help but be impressed by the Wolves' noise off the field, and their play on it. “This better than watching Havant & Waterlooville?” asked Vokes the Younger, and I replied (partly offended, partly realistic) “this season, yes.” Of course, the standard of football will be better in the Championship than the Conference South but, as we all know, football will always be more exciting if you genuinely care who wins to the point where the outcome can ruin your trip home, and your subsequent working week.

Wolves fans will not know this kind of ruin for a while now as the following week they sealed their promotion back to the Premiership with a 1-0 win against QPR. Saints fans, however, may have to wait even longer for any semblance of joy to return with relegation to the third tier, their first visit there since 1960, and the possibility that their club might not exist at all if they cannot find someone to cover their vast and baffling debts.