Considering Leyton Orient have struggled to get the new demographic of the east end’s population, traditionally one of flux and transience, to get behind a side bouncing between League’s One and Two, what chance does their neighbouring non-League side, operating barely a mile north west of Brisbane Road, not to mention five divisions south. Given the choice between coming here and a local I’m-A-Celebrity-style Bushtucker testicle tasting fair, the Leyton community would choose the koala gonads jamboree every time.

Mind you, non-league clubs in the area as a whole struggle for bodies; Redbridge, Waltham Forest and Ilford being amongst, along with Leyton, the five most poorly supported in a division where 12 of the 22 teams have declared at least one sub-50 attendance this season. Redbridge currently take the wooden spoon with only 19 people watching their game with north-west London’s equally-light-on-numbers Hillingdon Borough.

Leyton, the second oldest club in London after Cray Wanderers, having been formed in 1868, have had more ups and downs than an obsessive compulsive trampolinist in their long history, flirting with extinction on several occasions, and certainly in the last few years. In the 1920’s the club won the strong FA Amateur Cup two years in a row, winning the London league thrice in succession at the same time. Their last Amateur Cup final came in 1952 going down to local rivals Walthamstow Avenue at Wembley in front of 100,000. 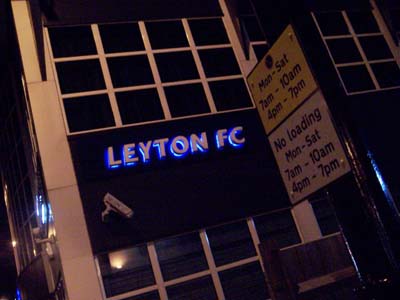 In 1975 financial troubles saw them merge with Wingate, before splitting again in 1992/3. Two years later a job lot of committee men and players upped sticks to Walthamstow Pennant changing their name to Leyton Pennant (prior to Leyton’s legal challenge). Leyton dropped into the Essex Intermediate League, but following an injection of cash under the chairmanship of Costas Sophocleous (who remains at the helm) saw them sail through the Essex Senior League all the way up to the Isthmian Premier Division in a matter of three seasons. Only a play-off defeat to Eastleigh prevented a fourth successive promotion to Conference South in 2005.

That was as good as it got though as after a couple of seasons of stagnation, the wheels came off last year with rock bottom placing that saw them finish 33 points behind second bottom Folkestone Invicta, a 1-11 home pounding at the hands of Hendon occurring en route. In October last year things took an even more worrying turn when rent arrears saw them locked out of their ground for a week. As a result, the following week, management team Steve Newing and Del Deanus resigned and took a great many of the team with them. Replacement Troy Townsend has been modelling his own team since then and by March the results had begun to come making sure that a further relegation back to the Essex Senior was not on the cards.

Despite its ramshackle appearance, with its wooden box stand and the scaffold effort with 1950’s seating on the other side of the turnstiles I like Leyton Stadium, or the Hare & Hounds to give it its traditional name. I like it for the proud plaque over that turnstile block which reveals they were bought from the old Wembley Stadium. I like it despite the fact the old disabled section was an inch high section of concrete tucked to the side of the tea-bar giving excellent views of a floodlight pylon. And the tea-bar. I like it despite the new disabled section, built into the new terrace behind one goal, offering good views if the wheelchair bound are able to ascend a ramp impeded by a couple of ladders. I also like it despite that terrace being taken up mostly by two full-sized sets of portable goal posts and its steps being so deep that if you sent a Slinky down them, it’d be requesting a full risk assessment before it went, and a parachute. 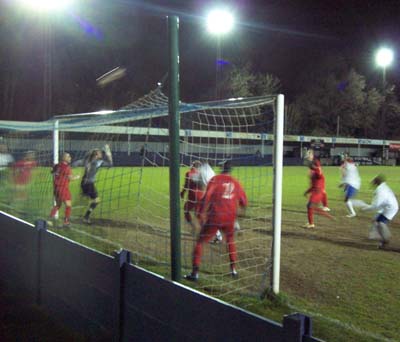 Another thing I enjoyed was the pre-match choice of tunes over the tannoy. Despite their being a limited audience to please, it was a selection that tried to please everyone, in attendance or otherwise. Some dub reggae drifted out as I entered, followed by some modern r&B which promised “sexual seduction”, then silence, as if to give us a moment to contemplate the words of this modern day Percy Bysshe Shelley, then some Oasis, Stan Getz’s The Girl From Ipanema and Dizzee Rascal featuring Calvin Harris. Now, just for fun, let me pull some names of musical artists from my memory banks for a stream-of-consciousness second: Tennessee Ernie Ford. Llwybr Llaethog. Beat Happening! The Reynolds Girls. The Princeton Reverbs Colonial. Gladys Knight & The Pips. Completely arbitrary but no more so than tonight’s DJ’s picks and for that eclecticism I salute them.

Northwood came to Leyton needing points to stave off Concord Rangers and Wingate & Finchley’s challenge for their current 5th place play-off berth and with them brought a fair proportion of the crowd of 40, a turnout which made the blank ‘For Your Notes/Autographs’ page in the programme seem, at best, a bit optimistic.

Gaps in the bottom of the net delayed the kick-off by ten minutes whilst a swarthy gentleman in a puffy overcoat instructed his runner to get the hammer and a hoop. As it was, it wasn’t that goal that was first troubled, Northwood scoring after ten minutes at the other end; Eugene Ofori gave it some eyebrows, the ball looping up slo-mo and spinning over the head of stranded Leyton keeper Elliot Justham. 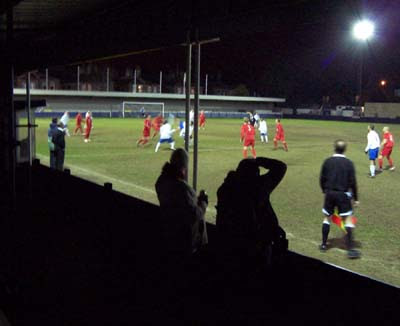 At the tea bar, the young lady serving was interrupted by a scraggy middle-aged bloke, looking like Bill Bryson if he were a dustman in the 70’s, peering round the side door. “Do you want anything then?” she asked after the pleasantries. “Not unless you’ve got some sex for sale” was Binman Bill’s oily Sid James-esque lip-licking reply.

With ten minutes remaining in the first half, Northwood had another chance, Ryan Tackley’s curled free-kick being tipped over by Justham. “Let ‘em have it” cried Ofori on several occasions, his sole method of inspiring his team-mates to, frankly, be as good as him. I’d have enjoyed the odd “have at them” to mix it up but this phrasing might be a little unlikely in north east London in 2009 or indeed anywhere after about 1841.

Five minutes before the break, Leyton’s Junior Luke raced with crazy whirligig legs, Billy Whizzed to the inside corner of the box and unleashed a first time shot that dolloped handsomely into the corner like balled ice-cream on a hot crumble. A similar period after the break and the home side took the lead, Phil Kane getting put through on the by-line, taking a poke at the ball which somehow bobbled over keeper Mitch Swain and in from the tightest of angles. 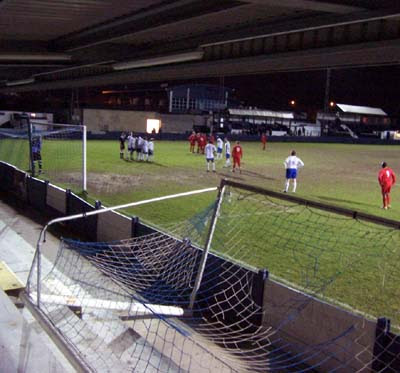 This galvanised Northwood and they created a number of chances in the following quarter hour with Dwain Williams having a shot tipped over and Gary Senior wasting a golden opportunity. The equaliser came in the 68th minute, Ofori again showing his class, turning on a sixpence on the edge of the box and hammering the ball into the top corner.

Ofori almost completed his hat-trick with ten minutes remaining, meeting a sublime cross with a cushioned but firm header that hit the underside of the crossbar but bounced down in front of the goal-line.

Not that this kind of form appeared to keep Ofori in good spirits, changing his “let ‘em have it” patter towards the end of the game to more pointed remarks towards the opposition, informed one that he was going to “f***ing ram it up your f***ing bell-end.” Exactly what he was planning to persuade through a Leyton urethra was unclear, but his hunger for the vital victory was apparent. However, with Leyton holding off what had been mostly one-way traffic subsequent to taking the lead, those three points were to elude him.