Judging by our final league placing (15th), this has been the worst season we have experienced as a united club. Yet, I’ve not hated this campaign as much as I perhaps should have done and don’t feel as disgruntled as I imagined I might now that we have stumbled over the finishing line like a marathon runner who’d traded their shoes for a Lucozade and a dab of Vaseline around the 15-mile mark.

Thing is, I love turning up at West Leigh Park, whatever the circumstances. Although I will admit I had been slightly concerned in the week or so leading up to this game, that a home defeat to our local rivals would be the horrible final-day bullet to our weakened knees. After all this was the fixture which stood out when they were published last July, and given Eastleigh’s season has been as enthralling for them as ours has been disappointing for us, the prospect of them lording it around West Leigh Park like cocks–of-the-walk was not nice. Actually, scrub the ‘–of-the-walk’ bit.

Furthermore, for a team that Ian Baird claimed he could “take no further” when he cleared off a year and a half ago, a great many familiar faces were present across their starting XI and on their bench; Matt Gray, Gareth Howells, Tom Jordan, Neil Sharp, Tony Taggart and Luke Byles all in tow. In the last week they also announced the signing of our recently departed stalwart Brett Poate, an announcement timed in their usual Machiavellian manner to unsettle our pre-game equilibrium. 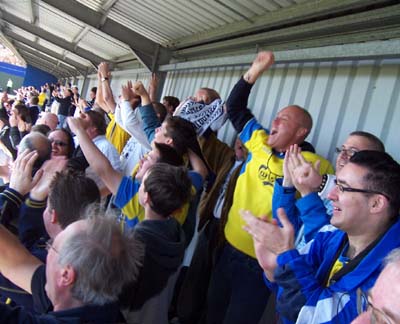 More fool them as while some of their previous steals have been of players we might like to have kept, Brett, for all his long-service medals and history of steam-engine-powering-through-the-countryside goals from outside the box, had become such a liability, serious consideration was given to us replacing him in the team with a cardboard cut-out of Dot Cotton. Not even life-size either.

So there were plenty of Judases (Judaii?) knocking about the place. One of our chants pejoratively referred to them as “Hawks Reunited”, but The Great Big Dick-licks & Knob-Stilton Travelling Jamboree would do just as well, albeit less easy to filter into song. Still, for all our anti-Eastleigh rhetoric, there is no doubt that they have achieved much this season and are deserving of their play-off place. That they got two extra points from Tom Jordan slam-dunking one in with his hairy palms against AFC Wimbledon made no difference to that nor, in the end, to AFC Dons’ eventual promotion.

Eastleigh’s ground isn’t really up to housing Conference National football, not comfortably. All the boxes are ticked so they can go up, but I mean in the sense that it is bloomin’ ‘orrible to watch a game there if the standing crowd is more than one-deep around the edges, where it is mostly flat-standing with no terracing whatsoever. Also, the modus operandi of their off-field staff still leaves a lot to be desired. However, for all our bluster and anti- ness, Ian Baird’s record over a 42 game league season remains pretty consistent. Having led us to 6th and 4th place finishes in his two full seasons with us. Eastleigh have benefited to the tune of a 6th and a 3rd. If lighting is striking twice, expect him to depart to Salisbury or somewhere late this September.

Still, that’s enough about Eastleigh, I said in the week I wouldn’t sing anti-Eastleigh chants, only pro-Hawk ones, as I didn’t want to waste my breath on such a horrid lot, but here I am wearing away my typing fingers. So let’s talk Hawk shall we? 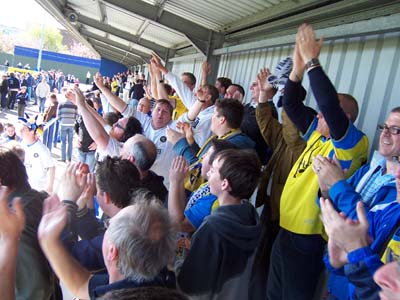 The fourteen single goal defeats, an incredible amount of 2-2 draws, and just seven clean sheets suggest that with a little more testicular fortitude, this season might not have withered like a finger trapped for too long in a too tight signet ring, at least not quite so soon. However I’m not entirely convinced by Shaun Gale’s recent comment that our recent form suggests “we’re not a million miles away from being a title winning side.” We remain a bit too leaky for that.

Attacking has been a bit of an issue too, despite us finishing with a lightly positive goal difference. Neither Paul Booth nor Luke Nightingale were able to reproduce the form that has won them this division’s Golden Boot in previous seasons for other clubs, and arguably this was partly down to a lack of biting intent on the part of our midfield. However, the progress of Craig Watkins from everyone's last choice for the bench to probably the first name on the team-sheet since a mid-December FA Trophy hat-trick has been heartening.

Luke Nightingale has improved in stature since the start of the season too. He may only have scored four goals in open play in the league but he’s been pretty reliable from the penalty spot, for which he’s been called upon regularly; he and captain Jamie Collins have shared twelve successful penalties this year (and a dud one each). At the start of the season Luke cut a seemingly de-motivated figure, phrases like those involving barn doors and tractors or cows bums and banjos being used so often we had to invent new ones to stop getting bored, stuff like “couldn’t score an old exam desk with a freshly sharpened compass” or “couldn’t hit a hippo’s portly midriff with an oboe.” While no-one’s player of the season, some of his form issues have been the fact we haven’t played a style of football that fits his strengths, which it would be harsh to blame him for. 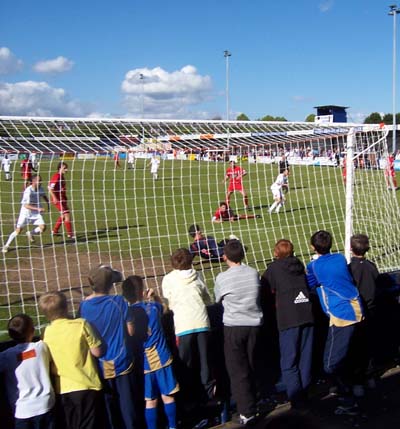 It is stuff like this that means the tactical and motivation skills of our management team have been correctly due for close scrutiny. However, they will not now be sacked, that seems certain. In a way, despite my grumbles when faced with demotion, I applaud the board’s loyalty in a world where the quick fix is favoured, especially to Shaun Gale, who appears to love our club almost as much as we do. I have spent most of the second half of the season hoping something would change, but now we’ve finished the season without being relegated, I feel a lot more sanguine. If our management duo’s community schemes do raise a lot of awareness and cash, perhaps it is better to play the long game than be like Veruca Salt and want the golden-egg-laying goose of promotion NOW! NOW! NOW! I say perhaps, as I can't really give a definitive answer to that. We will have to see.

Our club has seemingly used the Cup cash wisely, paying off debts and improving facilities. We’re as fiscally safe as any club can be and at the root of it we fans just want our clubs to exist. With the economic climate being what it is, some supporters around the country may not have that luxury for too much longer.

Also, while I’m in a fairly jovial mood, I should say it was a pretty decent game to see the season out, with a unexpectedly large Eastleigh contingent making for a decent atmosphere. We might have twice lost the lead but considering I thought a 1-0 defeat would be the best we could hope for, particularly with Eastleigh signing Nicky Morgan on emergency loan in goal (a keeper who has generally done very well against us for Braintree over the years), I’m not going to complain.

Craig Watkins broke through in the 21st minute. His first shot was blocked by Morgan’s drainpipe legs, although he showed lightning quick reactions to stick out a leg and crash home the rebound. Cue delirium [see top two pictures]. Sadly, but impressively, after 38 minutes Ashley Carew caught our keeper Nathan Ashmore in two minds to fire home a brilliant dipping shot from outside the box. “Mmm, that’s a goal”, I remarked to my London Branch colleague, displaying once again the penetrating analysis for which I’m renowned. 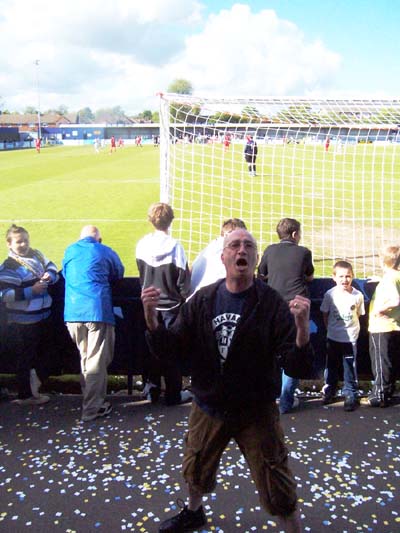 In the second half, the teams started playing it a bit more chess-like, until Luke Medley did what he does best (and sometimes worst) in taking fifteen touches where some would take one, threading the ball to sub Steven Walker who twisted, tweaked and then trickled the ball inside Morgan’s near post [see third picture]. The lead only lasted eight minutes though as five from the end, Matt Groves beat our Nath to rescue a point for the visitors. A fair result all told, and the Hawks largely rose to the occasion, despite the majority of them having no substantial connection to our bitch-slap back-and-forth with the Beastleigh types.

As such it was much more enjoyable than I’d feared; an opportunity for some final singing and dancing. Our man Ade, buoyed by fizzy liquid as final game tradition dictates, took the opportunity to lead from the front in every respect [see bottom picture], dancing like a chicken escaping from a straight jacket and demanding we get amongst the final choral effort.

So, we can still have a little fun here and there, despite it not being the season we thought it’d be. Certainly I’d been hoping to continue my overuse of the word ‘giddy’ on these pages, but it’s not exactly been the best fitting term for what’s gone on. At the end of last season’s final Hawk piece, I tried to repeat my gambit of the previous year by making the final line “next year will be another to remember” having been quite prophetic with it that first time. With my second attempt though, nothing could have been further from the truth. As such, we can do nothing but look forward. The stuff in the rear view mirror will only make us wince.