Perhaps the games that have been chosen as worthy of document on here have given a false impression, or maybe it’s the tinting on my spectacles, my hope that things would eventually turn out alright. After our flaccid home defeat to Worcester last Saturday, our fourth league capitulation at West Leigh Park this season, my rose-tinteds had not just slipped off, but been crushed beneath the soles of my shoes, my feet crashing against the terrace in frustration at a performance so wan and empty you’d think it was addicted to heroin.

The most worrying thing was the distinct lack of hubbub, but that can’t be blamed on apathy on our part. Supporters supporting can lift a side, but then again a set of players displaying a sapped morale can transmit to those onlooking. Certainly, the lack of hullabaloo is communicating out from the team, and therein lies a danger; a real risk of this season being an opportunity missed, on several levels. 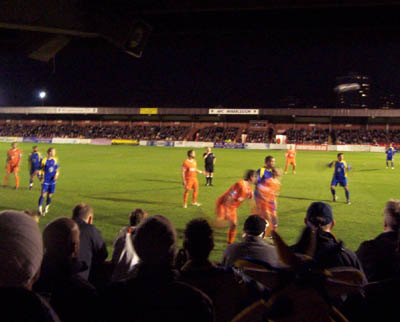 I could certainly live with missing out on promotion, but not in such a manner that suggests a lack of inclination. To adopt a theme m’Hawk chum Chris has put out there recently, we created a wave of increased interest last season, and our regular attendances have been boosted, but that only sustains for so long if you’re losing in front of the main body of your support every other week. The knock on effect of a football team being in decline will be that the club as a whole suffers, financially and in terms of self-esteem. Those who rode that tall wave last year may well tuck their surfboards under their arms and padlock their beach-huts, understandably lacking in inclination to mix it in dangerous and bitter waters over the winter.

Try as we might to summon up some belief, there have been too many lacklustre performances, with only one spirited showing per month thus far, to keep telling ourselves ‘it’ll click soon’. Two months in, that just doesn’t pass muster. Still, we can hardly be surprised at this trough. We said many times during last season’s glory tour, that this journey rewarded the regulars for turning up in all those hard times, those of us who come for both the thick and the thin. Clearly Football God heard this and Football God is now saying “So, you like a bit of thin? Here, have some thin.” 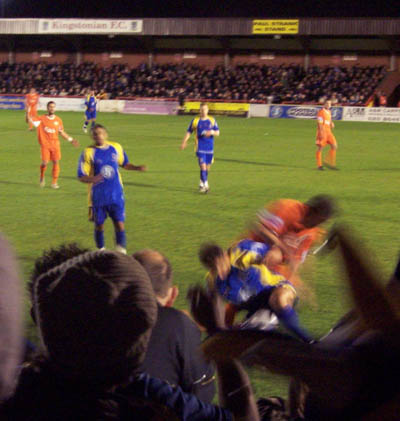 Following Worcester, questions were asked in the House, that house being our web forum and for the first time, at least with such vehemence, Shaun Gale’s tenure as manager was called into question, some even suggesting names, or rather a name, that might fit the managerial bill. Ex-Lewes manager Steve King is currently out of work, despite leading the Rooks to the Conference South title last season, and is watching a lot of football in the interim, stalking around several of our games like a pro-actively job-seeking Angel of Death.

All in all, not exactly an ideal atmosphere for Galey to take a team to AFC Wimbledon, a team making an instant impression in their first season at Conference South level. A good turnout of Hawk fans clustered in the corner, and got the singing in but sadly it was never going to be enough. Quite simply, despite putting up honest resistance in the first half, AFC were an excellent side that pounced on our indecision, scoring three goals after the break and but for Kevin Scriven’s return to form in goal, would have had a few more in the tin. 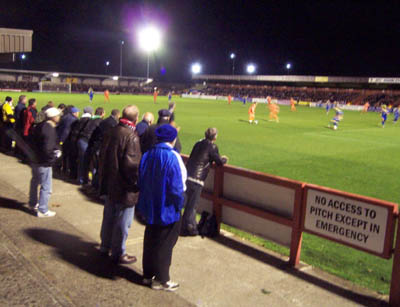 So we traipse from a drama towards a crisis like a banker in search of a sill but yet, despite our disappointment, these are the moments when we as fans have to re-affirm our raison d’être. We are supporters, so let’s support. As has been said, it’s very easy to turn up and sing when we’re winning at Notts County in the Cup and most of our home games in the league, a bit harder when the going gets tough. Despite the fact there are many who aren’t performing, and some whose continued selection (and/or positioning) is quite baffling, lambasting players whilst they are on the pitch can only be self-defeating.

Our expectations have been raised, certainly, but I can’t see how sacking managers at the first sign of trouble can be of benefit, particularly a manager who showed great loyalty in not doing one with Ian Baird to Eastleigh when he was asked. Perhaps it’s romanticised as a notion, but I place great value in honour, and it is a much neglected concept in football, as in life, and I feel it would be remiss of us to not give Galey a sensible amount of time to turn things around, particularly as I think we all may have been guilty of over-confidence based on our sketchy understanding of the club’s finances. This leeway can’t last forever of course, we won’t settle for relegation as long as honour is satisfied, but it is a very short memory that forgets the achievements of the current management team in its relatively brief time at the helm.

So, we go to Crawley in the FA Cup this coming weekend, and hopefully that will be not to sulk, but to serenade. Come on you Hawks.