I’ve been in London for two years now, and it recently came to my attention that I’ve yet to develop a soft-spot for a local side. I suppose, though, that these things have to happen organically. Like setting up a micro-brewery in your stair cupboard, you can’t rush it, you have to let the elements ferment and settle in their own time, otherwise you find yourself idly following a football club that tastes like watery vinegar. On this evidence, you will also find yourself tangling your metaphors like a headphone lead hurriedly pushed to the bottom of a congested man-bag.

Its not like I need another team in my life, all sorts of outfits having ‘vaguely interested in their results’ status due to me having lived close by briefly or by them being supported by the ghosts in the back-story; ex-colleagues, ex-housemates and this Scottish bloke I once knew who used to wear a really nice hat.

In this case, my visiting chum had chosen the game on the basis of having taken a liking to some of the Orient fans that had phoned into 6.06, displaying a infinitesimal soft spot of his own there apropos of very little which, as I’ve stated, is kind of how this game works. So, given that I was mainly at Brisbane Road for ‘showing hospitality’ reasons, I wasn’t expecting anything other than dyed-in-the-wool neutrality. However, when you’re stood up and shouting repeatedly “Ref, he’s gotta go” after the away side’s keeper has used his hand as jazzy trip-wire to professionally fell a striker in the box, you start to realise you might be a little more into this thing than you thought. This was particularly weird given the first half display that Orient had put on. If anything was going to scare me off instantly, it would have been that. 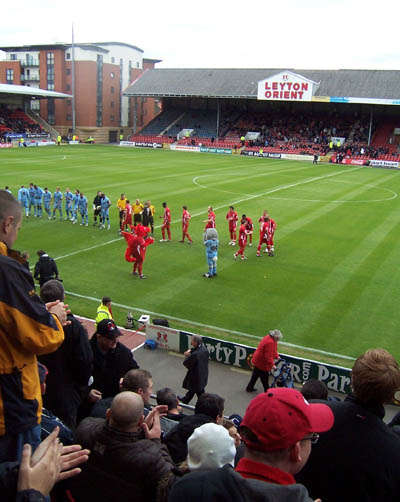 It turns out that in my capacity as a public health librarian, I actually work with one of the Leyton Orient club doctors. So woeful was the O’s defensive performance prior to half time, I wouldn’t have been surprised to see him striding onto the pitch to check either of the centre-halves for a pulse. Or if not that then to perform an emergency double amputation based on the thinking that, considering their efforts with two fully functioning legs, it might be time to tinker with their bodily formation and see if they might do any better on two weeping stumps.

While it fitted the pattern of the clubs respective league positions, Scunthorpe’s simmering 3rd playing Orient’s sprouting-mould-in-the-fridge 18th, the away side’s domination did rule out the possibility of using the club’s mascots as a visual metaphor, Leyton’s dragon mascot Theo looking cute but deadly in his vibrant red get-up, as compared to the clearly myxomatosis-ridden Scunny Bunny wobbling around as though searching for a shoe-box to climb into. 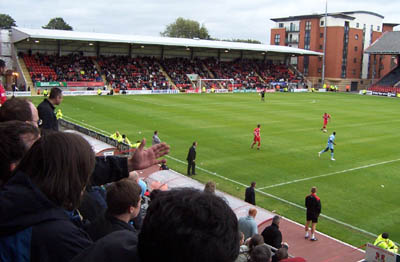 If any side was going to be buried in the back garden in a ritualistic ceremony for the sake of the kids, it was going to be the home side, and if you really wanted a visual metaphor, with Bunny McFleas letting us down somewhat, perhaps the crisp packets, sandwich bags and Styrofoam tea-cups drifting across the pitch throughout the game would have filled that void. ‘Rubbish’, see? Aren’t I clever? Orient looked perfectly fine going forward, but the back was really letting them down, bottom-group-of-PE-esque stuff being largely responsible for both of Scunthorpe’s first half goals.

Scunthorpe goal one: Grant McCann’s corner was missed completely by Brian Saah’s shiny bonce which meant the ball took Alton Thelwell’s head by surprise, allowing Izzy Iriekpen to take advantage of the ball dropping at his feet and fire home a solid opener. Scunthorpe goal two: Again Orient defended a set-piece like they were idly queuing at a hospital canteen for a carton of Ribena, having to wait for the lady on the till to shout “Can I help you?” for the fifth time before snapping out of their trance. McCann’s free-kick sailed over their stupor, Paul Hayes scampering in to place an untroubled header past keeper Glenn Morris.

It all appeared too large a mountain for the O’s to climb; Scunthorpe’s added class, possibly picked up on their single year sojourn into the Championship last season, looking apparent, if a little aided by Leyton’s defensive haphazardness. However, if ever an incident is going to a change a game, it will be a sending off, particularly that of a keeper. Not that it guaranteed success in this case, hastily introduced sub-keeper Josh Lillis saving Adam Boyd’s penalty, but only pushing it forward so that Boyd could crash in the rebound. “Yes”, I found myself saying, louder than I expected. 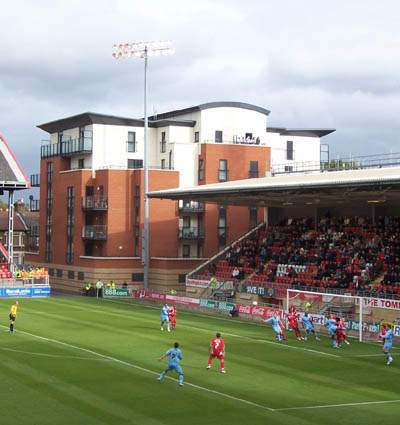 After this, with the crowd now behind them, rather than aiming insults at manager Martin Ling and assistant Dean Smith from behind the dugout, the O’s looked a different side, making the most of Scunthorpe’s body-deficit and finding an equaliser not long after, Boyd getting the ball expertly to Stephen Purches who fired above Lillis’ dive. Again, an unfamiliar ‘yes’ from the West Stand.

That both sides had chances to win it was an adequate reflection of the overall game, Orient had to ride their luck, but didn’t squander the opportunity handed to them, and it is that fighting spirit that they will need, given their position in the table. Despite this added soft-spot, I can’t imagine I’ll be going there a lot, not at twenty quid a throw and, besides, you can have as many soft-spots as you like, it’s not the same as being hopelessly enraptured, as I already am elsewhere. However, in terms of clubs I’ll sphincter my lips at when news of their defeat comes through on the Soccer Saturday vidi-printer, then I can now add another one to the list.

Accompanying me to Brisbane Road was sonic experimentalist type Gliiitches and his 'audio collage' of field recordings taken at the game appear now on his MySpace site.
Posted by skif at 12:01 am