Like with the Emperor, insistent that he was in fact wearing a spiffing new tailored get-up and definitely not sending out the imperial wang for a public appearance, there was no dressing this one up. With one round to go ‘til the propers; ‘til Leeds United, ‘til Leicester City, ‘til err… the winners of Aylesbury vs. Sutton, that last thing you want blocking your progress is the highest ranking team available in the pot.

That is, however, exactly who we got. At the time of the draw, Crawley were sitting atop the Conference Premier, under the stewardship of Steve Evans, a Glaswegian Captain Caveman with a vivacious purple head who, the last time we played one of his sides away (in that case Boston United), ran onto the field to attack one of our players. Admittedly this was in response to a poor tackle, but indicative of the fact that both before and since he’s been sent from more dug-outs than a Yorkshire terrier, circa 1939-45, regularly stinking out his street’s Anderson shelters with his cabbage farts. 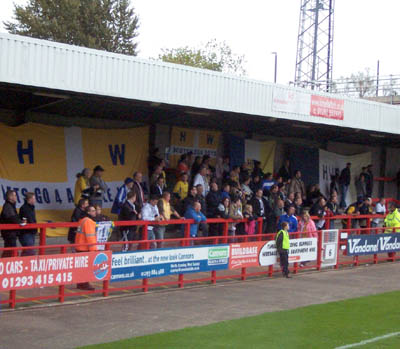 All in all, a likeable chap then. This is entirely the point. There was nothing glamorous about it. Sure, we were playing a side from a league above, but we spent several seasons in the Southern League with them prior to their promotion and thus we can’t view them with any real awe – its just them Creepies from up the road innit? For those same reasons, it’s not like there would be any novelty in visiting their ground.

For my part, I tried to throw some ragged, third-generation family tinsel around it by saying, well, I might have been there before but, hey, it’s been a while at least. However, considering my four previous visits had cultivated three comprehensive defeats and just a single win, even a half-decade gap felt far too short. Even that solitary victory was during my first visit, nine years ago. Still, it was a cracking 3-2 win. I don’t have many of our goals imprinted on my memory, but Dave Wakefield’s opener that day is still there a decade on, and not just because he looked a bit like Roger the Alien from American Dad. Nostalgia in mind, try as I might to gee myself up with talk of, well, we’ve felled bigger fellas than these, the worst-draw-possible thing was pulling me back like a shirt sleeve caught on a kitchen door-handle. 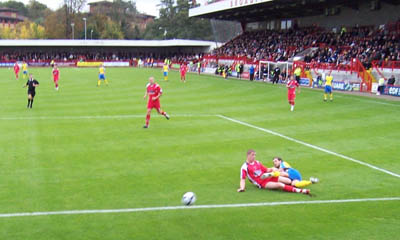 That, combined with the week we’d just had, meant I approached a Hawk cup tie with none of my usual giddiness. The previous Tuesday we had been given such a working over by AFC Wimbledon we might as well have been shackled to a dungeon wall whilst they went about it. Doubly depressing for me as I was suffering a week of email abuse from my Dons-supporting chum in Canada. It got to the point where I sent so many playthings flying out of my pram, if you’d picked them up you could have opened a branch of Hamleys. On three floors. And with a mobile toy library as a sideline.

As such playing the team top of the league above only pointed to us getting a severe pub car-park kicking whilst we were down. Nonetheless, the general belief still seemed to be there, as did our love of the FA Cup despite unusually low expectations, as the Hawks assembled in good number and voice. Perhaps 90 minutes of racket is the answer, both on and off the pitch, for as much as the Hawks have been cautious and insipid for the vast majority of this season, they were everything but when faced with their biggest challenge as a newly formed side, going gung-ho from the get-go and, seemingly, ignoring their instincts. Which, at this point, is a good thing. 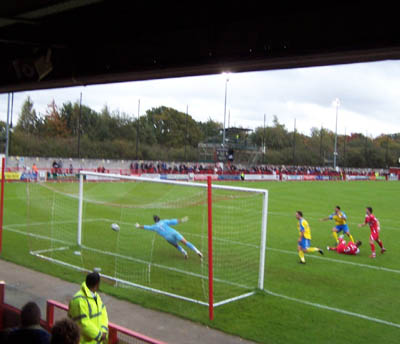 The formation was tinkered with, playing as a Christmas tree with Luke Nightingale as its (fallen?) angel, a show of faith by the manager despite a paucity of goals from the former Portsmouth striker. Whilst Luke may not have scored here, the tactics were otherwise giving us the shape to build, rather than lump, and see if the Crawley defence liked it coming quickly in their face, as it were. This, combined with a solid performance at the back, soaking up the home side’s early pressure, meant it was the finest ‘team’ performance this new bunch has thus far mustered. It would be remiss not to mention the fact that Crawley had Thomas Pinault (which I assume, given his retaliatory petulance, is pronounced ‘Peanut’) sent off, and had made all three substitutions before the start of the second half, but I believe this merely allowed the scoreline a little flattery, rather than actually changing it.

By this point we were already one nil to the good, Crawley old boy Ian Simpemba rising like a silo to place a header into the far corner [see above], and trigger panda. fackin’. monium behind the goal. After Peanut’s tunnelling, we ran the show, the team rewarding us with that very rare thing this season, a goal from a striker, Craig Watkins planting the ball home from Matt Gray’s cross, and another goal from Simpemba (who-oh-oh-oh), although being segregated and the goal coming at the other end, we believed it to be Gary Elphick supplying the flying bonce, and thus sang the wrong name. 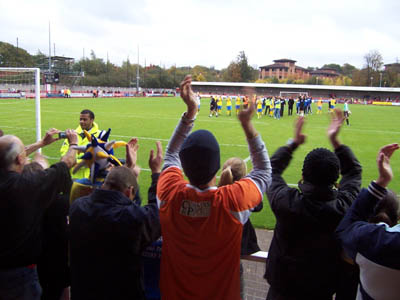 Still, what the hell, both our central defenders were immense and worthy of choral comment. Frankly, we were well worth our win and, from all the gloom, a glimmer of light appears. The Cup Propers once again beckon us, hopefully allowing a big shot of confidence to be injected straight into our hearts.

I’ve made much of the fact that our FA Cup reserves should have runneth dry, that our ration book should really be empty. Well, it is, but we’ve nicked someone else’s book. Eastleigh’s I imagine, half-inched out of their changing room whilst we were distracting them by scoring two goals in injury time to beat them 3-2 at their place in the Setanta Shield a few weeks ago. 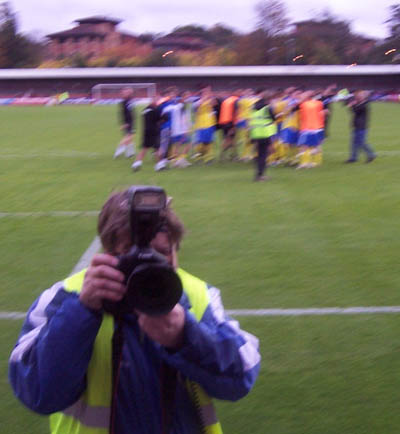 Some may have been thinking I’d been graciously avoiding mentioning that game, but frankly I was just ticked off that I missed it. After all the caper with Tom Jordan’s tapping up and protracted transfer, and their nicking of loads of our staff (however much they arguably did us a favour in the long run), beating our local rivals despite going into the final minute a goal down, the winning goal coming from a 96th minute penalty kick won thanks to a push by, oh yes, Tom Jordan, was sweet indeed.

Our players showed their stomach for battle that night, as they did here at Crawley, and we’d love to see more of it, particularly in our first round proper tie at home to League Two high-fliers Brentford. For now though, after a difficult week where the manager had his tenure aggressively questioned in some quarters, he and the players have answered their critics. The most impressive thing being that it was done with such commitment, such authority and such élan.

Just wanted to say good luck for the remainder of the season, good report of an enjoyable game. OK, I'm a bit late with this and the memory has faded a little but I foolishly haven't been blogging our FA Cup journey and haven't looked on here since the day before the game.

This game was our 7th FA Cup game of the season, after starting with Dulwich Hamlet in the prelims on a 'road-to-Wembley' type journey. This wasn't the game we should have gone too, though. By a Van Persie-sized slice of luck, time and traffic dictated we couldn't get to the game we should have gone to (Northwich/Telford) so we crawled through south London to the Broadfield and pitched up with the Hawks fans behind the goal. In fact, judging by the photos, we must have been stood right next to you.

I said it was lucky, if we'd driven from South London to Northwich for a non-refundable 45 minutes of abandoned FA Cup action, we would have been livid.

I should add that I'm an Ipswich fan and my compadre a Gooner but we thoroughly enjoyed the Hawks' choons and particularly Simpemba's two headed goals and solid defending. Also the highlight of my FA Cup so far happened. I was having a crafty half-time fag behind the stand when a ball came over into the car park. 10 seconds and a perfectly executed drop-kick later and the ball was back in the ground. I'll never do that again.

Sadly, we couldn't get tickets for the Brentford game so we got back on track following Telford and now find ourselves heading to Stamford Bridge with Southend United. We can only hope for a shock because the thought of following Russki big bollocks for the next 5 rounds fills me with hate, spite, self-loathing and other bad things.

ps: surely it must be time for Havant to play Ipswich in pre-season?? You're missing a team in your list.