Despite the fact that the play-offs should be well within the capabilities of our side, we find ourselves a bit behind the pack. After two seasons being there or thereabouts at the top, even topping the Conference South for one sweet week almost exactly a year ago, we have hovered in the upper section of the lower half (now if that isn’t a glass half-full description) of the table for most of the last four months. One might point out the Cup stuff as being a league-game shunting distraction but the fact is we don’t have a ridiculous amount of games in hand to play Going For Gold-esque catch-up with and our away performances have been pretty shoddy for longer than is really credulous. 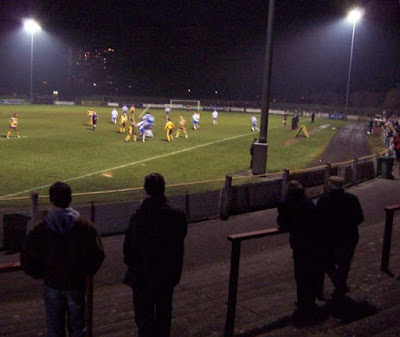 Still, things could be worse. We could be having a season like Sutton. Indeed, that’s kind of the reason I wanted to document this game, as I’m fairly certain that we’ll be in a different division to the U’s next year, their relegation seeming as nailed on as a man crucified for aggressive leprosy. Not that I’ve not been to Gander Green Lane before, but that was five years ago, when we played, and beat, them in the Trophy. Sutton were a lot more exotic in those days, them being Isthmian Premier and us being in the Southern League.

That game is best remembered for the performance our veteran reserve keeper, his athletic saves in adversity (first choice custodian Aaron Kerr having missed his train from Birmingham) cementing his reputation as a proper making-the-most-of-his-ability non-league cult hero. His rushes of blood, so regular that it’s a surprise he didn’t collapse more often, earned him the extended moniker ‘The Crazy World of Steve May’, not, I imagine, that Stevie himself was entirely happy about that. 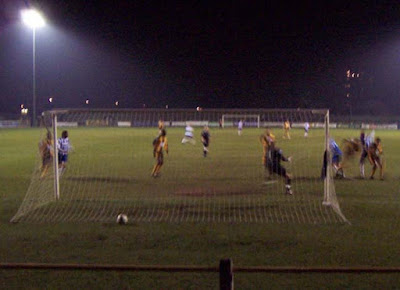 Since the coming of the Conference South, I’ve missed all our games with Sutton. However, the southern half of the SmokeHawk branch tells me beforehand that we can usually expect to be nithered stiff and to take away a point. We’d have probably taken that before kick-off today which, considering Sutton’s position, goes to show just how dreadful our away form has been. Indeed, I had to look back through my records for the last time I had witnessed the Hawks win away in Connie South - November 2006: 1-0 at Hayes (yes, still just Hayes in them days) - and even that was a squeaky last-minute winner. 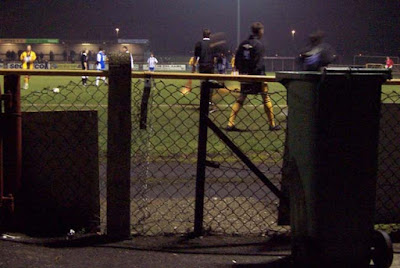 Mind you, the Saturday prior to the game, we’d exorcised one of our demons. For the last four seasons, our results against Cambridge City have been almost uniformly dreadful, but finally we managed to scrape a win, at home in front of over 2,000 people. Free entry for those with Liverpool ticket stubs helped, but apparently around half of those paid to get in, so perhaps we have finally made the local populous come and get amongst the West Leigh Park ‘it’. Indeed, pride does appear to be running high.

After the Cambridge win Charlie Henry, having come on as a substitute and barely figuring since his move from Dorchester (a combination of being cup-tied and a two-month injury complaint), came to we fans behind the goal and beat the badge on his chest like a horny g’rilla. Needless to say, we like a bit of passion and thus we very much like Charlie, especially considering Tom Jordan continues to appear in the local press saying he still wants to move to Eastleigh. Quite why he’s so desperate to rejoin the grumpy sunburnt egg currently at their helm it’s hard to imagine, but with cup-tyin’ now no longer a-pplyin’, he finds himself once again cast to the sidelines, despite excellent performances when called upon.

So, despite the weathered pessimism, we did still think we should make the most of our trip to Sutton, in every respect. After all, I think it’s fair to say that the general feeling among the Conference South is that Sutton would be missed if they were to drop back down into the Isthmian. Not for their football so much but more for their fans, who enliven Conference South terraces and web fora alike. Certainly they appear to be a bunch of hedonistic fun-time fans in the manner I think we aspire to be, and are, 95% of the time, and not a bunch of grizzly bunch of bitter nerks. The fans of Bromley and Carshalton might not agree with that point.

However, their regulars are quiet tonight, possibly silenced by their predicament. However in their place they have rather unfortunately been afflicted with a bunch of teenagers eager to antagonise. Most of their stuff is tired anti-fan gear, although at least with “2-1 and you fucked it up”, a reference that manages to take in our ‘squandering’ of that advantage against Liverpool, and that being the scoreline when Sutton were the last non-league side to defeat a top division team, in their case Coventry, in 1989, manages to be quite clever and depressingly puerile all at once. Fair play folks. Now f*** off, there’s good fellows.

Even a goal in the ninth minute for Tony Taggart, heading in a Rocky Baptiste cross after beating defender Dean Sammut, [second pic from top] failed to silence them, and neither did Rocky’s typically unfussy penalty eleven minutes later, awarded for an Alan Bray handball. Not that I saw the infringement, I was on my way back from the gents at the time, passing Li’l Alfie Potter who, despite having returned to his Peterborough United employers, had come to say hello. Clearly the Hawk subs had not been expecting this, reacting to him popping his head through the port-hole by the side of their bench as though he’d actually announced himself by breaking through the dugout roof with an axe. 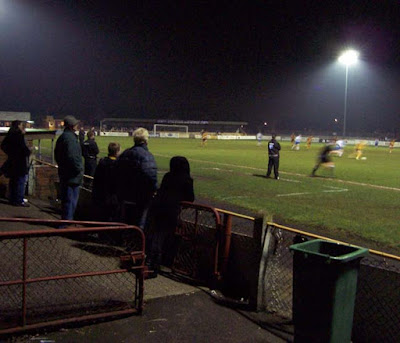 Despite a strong defensive performance overall, there was a brief but potentially crucial lapse just prior to half-time, conceding a penalty that Craig Dundas fired past Kevin Scriven. No chance to relax at half-time then, but when is there ever? However, the second half was only a few minutes old when Gary Elphick extended our lead with a typical defender’s set-piece header [above].

After that a few chances went to either side, but nothing really endangered the Hawk’s precious away victory, or the deflation of Sutton’s already well punctured morale. Another three points in the knapsack then, sure as eggs is eggs, and as sure as them eggs were suddenly raining over the back wall from outside the ground. Y’see, all we had to worry about on the terrace curve at the far end in the last half hour was a bunch of knobs chucking what was to be the basis of a medium sized breakfast omelette over the terrace wall.

The eggs landed several metres away from our group, but it caused a shuffle backwards to grip the wall like borstal kids being hosed down from close range, while some stalked out looking for the culprits. The nerks from the far end came round attempting to wash their hands not, it appeared, of incriminating yolk, but of the ‘outsiders’; the leader of their gang (wearing a bling earring so big you could plug a bath with it) awwight-ing his apologetic dismay in a manner most incompatible with his group’s first half efforts.

The final whistle went without, I’m pleased to say, our jackets being sullied by mushrooms, bacon, black pudding or anything else that’s usually found sizzling away on a greasy spoon hotplate. While we might miss coming to Sutton, we won’t miss the new duck-and-cover element of the matchday experience.