Keen as I am to give thanks for my blessings, Valentines Day gives me an easy excuse to express my gratitude to my ladyfriend for being unbeatably gorgeous for yet another year. Pull those fingers from your throats, gents, I’m going somewhere with this. I am grateful though, grateful that I’ve no need to be one of those men sitting at home dribbling over the kind of scantily-clad blonde tartlets that, for reasons I’ve never been able to fathom, have become the accepted ideal of the female ‘look’.

However, for all my pro-fem gender politics, when it comes down to it, I’m no better than a teenager, acne pulsating like a red ant warehouse rave, wearing himself down to a salty nubbin in front of Babestation. Cos for all my “I am romance – hear me roar” posturing, while on a Valentines weekender to Nottingham, I can still dress up clearing off to Shepshed Dynamo FC as being a selfless gift of “unrestricted girlie shopping time.” I am new-man! I am love incarnate! I am St Valentine himself! Feel my arra’s of adoration! Mind you, I am very much the huffy toddler when it comes to clothes shopping, taking up valuable spending time by whining thing like “I’m bored”, “my feet hurt” and “can we go now, I want a Kit Kat Chunky” so I guess everyone ends up a winner. 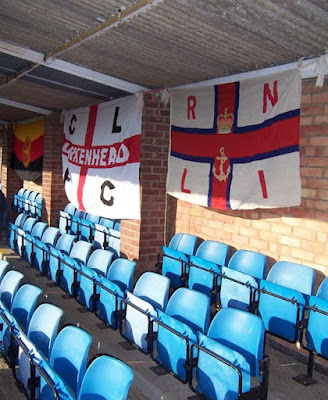 So this is indeed me playing my tactical game, allowing gambits such as doing one to the Dovecote to pass as though I really am doing my missus some kind of favour. On top of that, with this game I can also paint a picture of me going to visit with some old chums for, as luck would have it, Cammell Laird are in town. While I may not have gone looking for a new club to follow when I was in the north-west, I couldn’t help be impressed by Cammell Laird the first time I saw them in March 2006. I went to watch them five times more that season as they tried, successfully, to win promotion to the Northern Premier League set-up and, unsuccessfully, to get past Nantwich in the FA Vase semi-finals.

That ridiculously successful championship winning side, naturally, started to break up; Jamie McGuire, Anthony Hargreaves and Ronnie Morgan now stationed at Droylsden, Flixton (via FC United) and TNS respectively. However, in today’s starting XI, Eddie Jebb, Anthony Sheehan and Anthony Lynch remain from the 2005/06 campaign, the latter still captain and in his sixth season with the club. Shorn of the men who scored goals by the forklift-tipping crate in the NWCL, Laird have pulled replacements from the League Of Wales (former Rhyl striker Alex Hay), a school staff room (PE teacher Chris Adamson) and Wayne Rooney’s Christmas card list; cousin Thomas Rooney starts up front while brother Graham, who would probably push a battery-licking Wayne into second place in a ‘Wayne-Rooney-licking-a-battery’ look-a-like contest, sits on the bench. 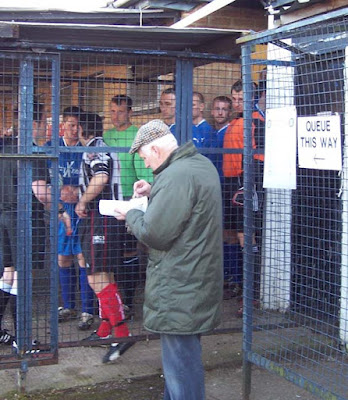 This season appears to be rolling out in much the same way as the last for Lairds. They were perhaps a little unlucky not to achieve a fourth successive promotion last year, finishing the campaign in second place, seven points behind champions Buxton, and seven ahead of the Eastwood Town side, in third place, that would eventually beat them 2-1 in the play-off final. This year, prior to this game, Lairds were second, seven points behind Retford Town and six ahead of third-placed Goole.

Plenty to get the travelling Laird army excited then, but their van load have never been ones for singing, instead relying on a drum and a plastic rattle whirring away like an epileptic turnstile. Stood next to them amongst the far-side seating are the Shepshed youth, doing their best to antagonise, while an older, more genial vocal grouping balance them out at the other end. Eventually the Lairds’ music men tire of the teenage attention, “Who’s the wanker with the drum” etc., and move in with the more mature element. 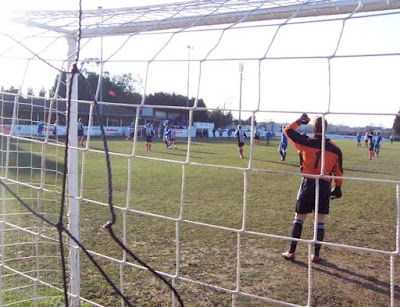 Well, I say mature, but even they can’t let the name of the lane in which the Dovecote is located pass without comment, all gleefully slapping their palms whilst intoning “if you like it up the Butthole, clap your hands.” Yes, Butthole Lane, but these things can happen when you give town planners both a tight deadline and a gert f***-off box of wine.

Aside from the far side stand, there are a few higher raised seats, which may well be the director’s box, along from the clubhouse and dressing rooms on the nearside, and a new set of plastic bum-cups behind the goal. “No standing in the seated area” says a sign on the wall behind them, a load of orange netting wrapped around it meaning that there won’t be any sitting in it either.

Despite competing well in terms of the number of flags on display, the Laird followers choose not to combat the syncopated stereo of the Shepshed hardcores, who gradually move on to bantering with each other; “Andy Mac’s a homosexual” the youth chant, “You want me!” the solitary rejoinder. However, while the Laird followers might be losing the singing, their side are soon winning the game.

Not long after Gary Hateley kept him out at full-stretch, Matt Milns dithering before eventually welting the ball away from the marauding Anthony Sheehan, Thomas Rooney beat the defence and met the high bounce with a side-foot lob which easily beat the high and dry keeper [see pic below], the ball making a rather unsatisfying dull thump against the hoarding pressed up tight to the back of the net. As if to provide an encore, Rooney scored a virtual identical goal five minutes later, the difference being that rather than latching onto a high ball, he controlled an immaculate cross from midfield general Eddie Jebb before placing his shot up and, indeed, under. 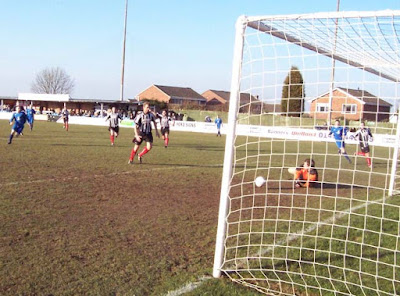 Just before the half-hour, Lairds won a free-kick just outside the box and took it so quickly two Dynamo defenders collapsed over each other’s legs in a scene resembling a Norman Wisdom speed-date with an elderly deckchair. Two minutes after this, Rooney spurnned the chance of a hat-trick, Milns’ poor defensive header dropped straight to the striker whose shot skimmed just over the top. Milns’ then covered his faux pas by berating right-back James Whitehead for his communicative deficiencies.

While Lairds’ appeared to be coasting, John Collins was walking a tightrope, getting away with one flash of the elbow. This incensed Shepshed assistant manager Jim Albans who round and reddening began to look like a volcanic Mr Uppity as he barked away at the linesman. However Collins was not so fortunate with the second wave of his arm in the direction of a Shepshed face, and was tunnelled. At this, one Lairds fan decided to report apparent skulduggery on the home bench to his club’s manager, Ian Doran, “Ay Ian, blue shorts [Albans] whispered in the lino’s ear, blue shorts, there,” which did nothing for relations between the two dugouts, but did at least bring Albans’ sartorial no-no’s, and thick, pastey legs to public attention. 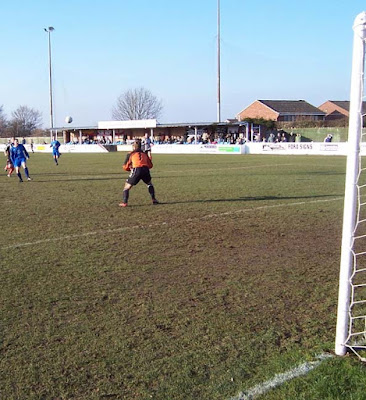 Within two minutes of the re-start, Shepshed got one back. Making use of the Collins-shaped gap, Shane Benjamin barrelled through getting all of his weight behind a close-range shot that Paul Whitfield had no hope of consciously stopping. A minute later, Dynamo were aghast to miss out on a penalty when the ref decided not to penalise a handball in the area.

With Lairds’ stretched, Rhys Powell received the ball at the corner of the box, nutmegged a defender and speared a shot across goal, where Benjamin’s leg was out-stretched but not long enough to prod the ball home. Benjamin did get a second though, when Dynamo had another shout for handball in the box with twenty minutes to go. This time it was given, courtesy the linesman theatrically drawing his flag across his chest, and Big Shane beat Whitfield’s dive [see pic above]. 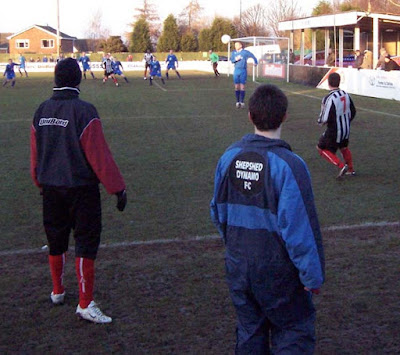 However, their lead was to last all of three minutes. Alex Hay muscled past the last defender and crashed a shot past Hateley into the bottom corner. Despite leading again, the increased tension saw Doran begin mouthing the words “I’ll smash your fucking head in” over and over towards the Shepshed bench, but through a facial expression that might suggest to those a little further away that he was saying something like “yeah, lager, lovely, oh and can you get us a bag o’ cheddar McCoys while you’re up there. Cheers.”

Despite a couple of great chances for ‘Shed substitute Lheureux Menga in the last fifteen minutes, Lairds held out to keep up the pressure on Retford. Shepshed however now languish in 16th, two places from bottom following their second 3-2 home defeat in a week, the first coming at the hands of local rivals Quorn, and this follow-up despite a fifty minute one-man advantage. Dynamic, 'twas not.

Dressing up some hobo action as an opportunity for your ladyfriend to indulge her passion for shopping - you, sir, are a genius. Not sure I like the idea of the image of you being "a teenager, acne pulsating like a red ant warehouse rave, wearing himself down to a salty nubbin in front of Babestation"...