Trick is to be a talisman for the side you support. Soon as Paul Collingwood came out to bat I knew the game was up. As he strolled out, with Durham 180-3, I was reminded of something I had been informed of by m’chum Andrew, my regular Test Match companion. After we’d seen England play the West Indies at Lords, he pointed out that we had seen all of Colly’s Test wickets live and in the flesh, his second coming that day, about nine months after his first - against Pakistan at Headingley Carnegie. Not a prolific wicket-taker? Or just at all other times without the enchanted amulet that mine and Mr McDevitt’s presence provides?

As further proof of this, we were at the fourth day of this summer’s final Test against India at the Oval, when he took another couple. Pedants among you will note that between that West Indies test and the Indian second innings at the Oval, our Paul managed another two Test wickets. However let the record show that both of those were lbw decisions (against Sachin Tendulkar and Sourav Ganguly), each being more scandalous than a You Tube uploaded web-cam threeway involving a minor Royal, a disciple-hungry under-butler and Leslie Grantham. For all the cast-iron, rock-solid, (I-am!-the-one-and-only)-you-can’t-take-that-away-from-me, proper stuff, Colly needs his dynamic duo. In our absence, only dodgy umpiring decisions will do.

Not that he needed them today. Alright, he didn’t do much with bat, scoring 22 off 35 balls, but then he didn’t really need to, with fine swash-buckling efforts from Messrs Mustard, Coetzer, Chanderpaul and Benkenstein, sending the Hampshire attack, particularly internationals Daren Powell and Chris Tremlett, to all parts. Eight sixes, twenty-eight fours: all in all plenty to keep the Durham supporters, watching their team’s debut Lords final, in canny fettle. 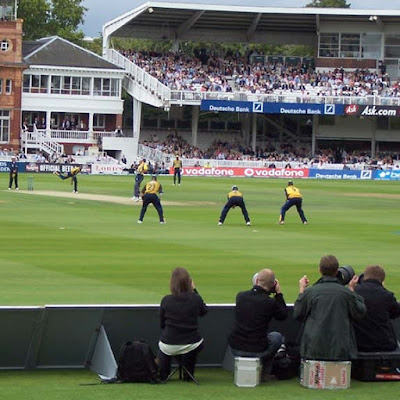 A number of suited and booted Dynamos are sat behind us in the lower tier of the Edrich. The ceiling separating us from the upper ranks is as useful for amplifying their chanting as it is for racking up the risk of all of us here being stricken with hypothermia. It’s like the Arctic down here on the nicest of days, and today is not a nice day in any respect, not merely for the grey clouds but for the sound of those sartorially elegant north-eastern boys breaking into song yet again as another delivery is belted over the boundary. Always the same song too, a song with a lyric of one word. ‘Durham’. Sang to the Pink Panther theme. Making the most of the gift Mancini gave them and it would be a nice conceit, if I were a neutral. You’ll have spotted by now that I’m no more neutral than Midge Ure was a sailor, soldier or feckin' painter.

Shivnarine Chanderpaul remains a constant frustration to me. England could barely get him out both in 2004 and this summer and today he continues to thwart my team of choice, but you can’t help but admire the mastery of his innings. Solid as a flock, he builds methodically but glides effortlessly into expansive shots, like a craftsman, perhaps a dry-stone waller, tentatively experimenting with amphetamines. It takes a product of circumstance to finally get rid of him, his slip backing up allowing Carberry’s alert throw to reach Shane Warne before he can gather himself. The subsequent shouts of “Hampshire, Hampshire” are part exultation, part relief.

To finish their innings with a flourish comes the 38 year old Ottis Gibson. Now if I am Paul Collingwood’s good luck charm, the Hampshire team as a whole are Gibson’s. About a month ago, in a first class match against Hants, he took all ten wickets in their first innings, the first time this had been achieved in England in thirteen years, and only the seventy-eighth man to do so in the long history of first class cricket. Not bad for a man who initially retired from the game six years ago. So, the fact that he should crash a four and six in a seven ball 15 against the Hawks should be no surprise.

Neither perhaps was his taking of Michael Lumb’s wicket, caught nibbling by Michael Di Venuto at first slip, with the very first ball of Hampshire’s innings. Although the joke was being stretched a little thin when the very next ball saw Sean Ervine depart in precisely the same manner. The mirror imaging of the two dismissals was so sharp, you could have used it to have a thorough wet shave. Hampshire fans wouldn’t need to moisten their skin first either, their tears would have been doing a perfectly good job. If a total of 312 to chase was a hint that the game was up, being 0-2 after two deliveries was the words ‘Err, the game’s up’ being writ large in spray paint on the windows of the Media Centre.

The best answer to that though is to have Kevin Pietersen in your locker, coming in at four. However, he won’t have been used to facing the third ball of an innings and although he lasts longer than the previous two incumbents of the crease, it is only 25 minutes longer, before the astonishing Gibson takes his wicket home for the grandkids. Grandkids who may indeed already exist. It is an LBW so plumb, Pietersen walks on it, leaving Hampshire 17-3 after eight overs and staring down the barrel of a real humiliation. Certainly when the following over the Duckworth-Lewis parity score flashes up for the first time, the reality kicks in. 96, it reads. Slaves to the algorithm.

Gallows humour mixes with rolling eyes amongst the Hampshire support, as well as the scratching of pens on a few ‘Dear Shane’ letters. Thankfully, the old, wise and dramatically hairless head of John Crawley steadies the ship for a while, albeit in fairly erratic fashion. Knowing the rain is coming he tries to up the run rate, but in doing so lives dangerously, spraying it everywhere like the Mannequin Pis body-popping on the live rail. The green shoots of recovery are soon gone over with a sit-on lawnmower, firstly by Graham Onions, who forces Michael Carberry to play on. Then Collingwood comes on, and I wince. Squinting to prevent my powers from gushing forth.


It is no use, he bowls Crawley for 68, and although this brings the potentially explosive Dimitri Mascarenhas to the crease to join the classy Nic Pothas, the only feeling I have is that these two have been called onto to rescue us after a top and upper-middle order collapse on so many occasions before (at Tunbridge Wells in the vital two-run squeaker that propelled us to this final for a start) and this might be one too far, particularly as Nic the Greek starts his innings by continually reverse-sweeping, seemingly until he gets good at it.

They have time to consider their options though as, not long after Creepy's castling, the rain that has threatened all day finally turns up, and stays for dinner, light cheese-platter conversation and a naughty night-cap. Being London based it would have been very easy for me to return to Lords on the Sunday for the remainder of the game but the combination of more murky forecasts, rain delaying the start and my not wanting to sit in the pissing rain for hours just to watch Hampshire lose, I stay at home. Part of me also hopes that my remaining on the couch watching telly will be Delilah’s clippers to Collingwood’s Samson locks. Sadly rumours of my importance appear to have been over-estimated, and Colly takes the wickets of both Tremlett and Pothas, as well as the catch off Liam Plunkett to remove Daren Powell, even in my absence.

So, Hampshire lose their first Lords final. The first one I’ve been able to attend. Perhaps then my abilities to affect performance are not related to Paul Collingwood at all.