Once again the FA Cup weekend finds me indisposed of the Saturday, whisked away in the roll-over-and-farts of the morning to a Cardiff wedding; a 3:15 garter-up making the entire day a football write-off. Thank God then, or possibly Crunchie, for Fridays. Friday night football meant Stansted was achievable in the Extra-Preliminary two weeks ago, and now I can get in an advance for this round of the prelim proper, as ‘twere, albeit by returning to a familiar setting than setting down fresh tread marks somewhere new.

Three or four times I’ve been to Park View Road along with the H&’Dub hardcore, but that has been with Welling United as host. Today however I am brought here by Welling’s Kent League flat-mates, Erith & Belvedere, who had a Park View of their own, in Belvedere, until the 1st of September 1997 when arsonists destroyed their main stand and saw them, for a time, staring down the barrel of extinction. They made do and mended with portakabins for a while prior to entering the current arrangement with the Wings. 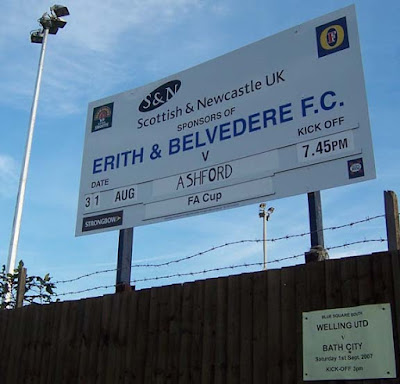 It is not your conventional landlord and tenant relationship however, as essentially these days Park View Road is like a house in which amicably divorcing parents are staying under the same roof for the sake of the kids - Welling staking their claim on the Turkish rug while Erith & Belvedere examine the pre-nup to establish their right to the Human League LPs. Thankfully there is shared custody of the pitch, even if there is a metaphoric line drawn down the centre of it, with each club having one side administratively speaking, to themselves.

If you were to look at the ground from the top of passing City-bound bus, Welling’s entrance is in the right corner, leading onto the side with their slightly dank rickety old stand, while the Erith & Belvedere turnstiles are at the left edge, leading to their shinier four-year-old seated stand. While both stands are open for all matches, there is also a social club and set of changing rooms on each side, meaning both clubs can engage in their own money-making activities without stepping on the toes of the other. Eight years in, they seem to remain happy bed-fellows, but then they have yet to meet in league competition, Welling having been in the Conference for most of the twenty-three years in which the Deres competed in the lower tier of the Southern League before their first ever relegation back to the Kent League two years ago. 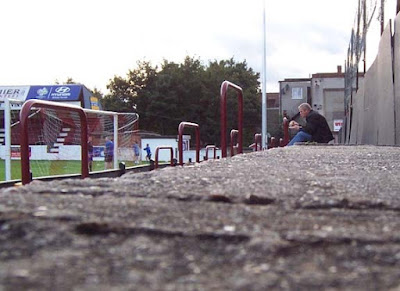 However, Erith remain a club with ambition and having missed out on promotion last season despite a club record thirteen match unbeaten run in the latter part, they will be keen to go one better this year. Their progressive thirst is certainly matched by their cup opponents tonight, Ashford Town, who after a few seasons of struggle, have recently welcomed new investment that will see a refurbishment of both ground and playing side. The Nuts and Bolts will present a formidable challenge for the home side competing, as they do, a division higher, in the Isthmian Division One South, promotion to which will be the Deres ultimate goal this season.

The challenge the higher-ranked team represent is slightly undermined prior to kick off by the number of practice balls that fly out during the warm up into the busy Park View Road itself, making life rather precarious for drivers and for daredevil ballboys alike. Despite this, Ashford impose themselves on Erith & Belvedere virtually from the kick off. A short cross after a run down the right meets Steve Sodje’s head, but keeper Grant Wallis is spread-eagled like a rack-strapped husband rapidly losing patience with the imbalance toward the ‘S’ in his Gala Bingo-bound wife’s S&M fetish, and is able to paw it off the line.

If Ashford’s dominance and seniority isn’t causing the home side to teeter enough, their reduction to ten men as early as the twelfth minute has them clutching at a short and rubbery exposed root peeping from the top of the cliff-face. Mark Nougher is the guilty man, tunnelled for throwing an angry fist in the direction of Tony Browne. 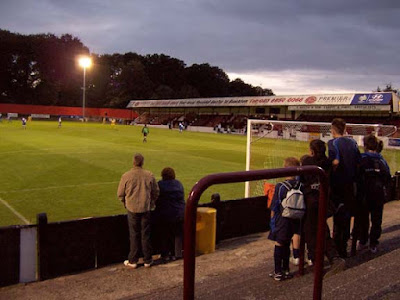 However, having clearly had ‘Touching The Void’ on the team-coach to their last away game, they weather the increased gaps Ashford can now exploit as they come cascading down the pitch’s slope with the aggressive, but giddy, abandon of an army of Zulus tripping over their shoelaces. Wallis makes another couple of vital saves, while Steve Sodje passes up another chance as the ball slides off his shiny bowling ball ‘ead and wide.

However after 36 minutes, the tide turns. Perhaps the E&B players are increasing their strength and morale simply by taking their opponents literally (and comically) at face value; Barry Gardner’s wispy chinly tuft giving him the air of a teenage wizard, while Aron Freeman must have gone about ten rounds with a car-crusher appearing, as he does, to have been recently cubed. Whatever it is that causes it, Adrian Deane is most surely struck by some kind of inspiration, as he flumes a twenty-five yard kick past the ear of the last wall defender, the ball deviating the slightest fraction to take it past Jake Whincup’s hand and into the top corner.

In the second half, Ashford regroup and try to make the most of their extra body. Six minutes in, a corner flies over the Erith defence but Danny Lye at the back post skies his header and he ends up in the corner of the net himself, Grant Wallis able then to palm it away. After this though Erith are soon able to bring the pace of the game down to a level their ten men can easily cope with. 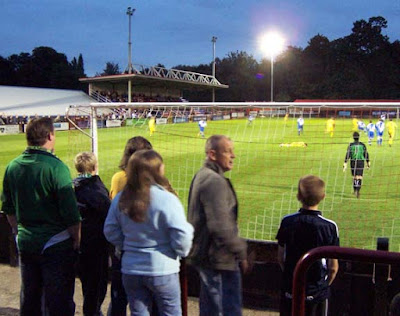 Just after the hour, during a break in play, Jake Whincup is trying to get the assistant ref’s attention, apropos of a time-check. However, our man with the flag appears to be giving him the cold shoulder. “Line-oh” bellows Whincup, from about twenty feet away, over and over and over, like a stricken Thundercat of the lower ranks, or maybe a flooring fetishist going through a particularly traumatic cold turkey. Eventually, after about a minute of this, the linesman turns and says “yeah?” Whincup missing the comedy gold opportunity of replying “oh, nothing.” Soon enough play restarts, Ashford sub Walid Matata getting the ball at the back post and his shot requires a diving stop from the busy Wallis, who then has to punch a cross away off Matata’s head as the Ashford man seeks to develop his orbiting moon relationship with the ball.

A minute before the end, as the Nuts and Bolts stretch themselves for an equaliser, lone Deres striker Mike McKenna gets put through on the left and waits patiently for Nick Smith to make his run. McKenna threads the ball behind the defender, Whincup makes a dive on the ball at Smith’s feet but only succeeds in making it cannon into Smith’s shin and ricochet back past him into the bottom corner. Over in the Welling stand, the Erith & Belvedere under-13’s squad squeak out a “we can see you sneaking out” at the large contingent of green-scarved Ashford fans walking at pace toward the exit. It is the least that can be sung in praise of an astonishing effort by ten men, who not only held out for eighty minutes against a side from a league higher but also did what their senior opponents could not – take their chances when they arrived.

Wow - I just wandered in via the link on "Wick To Wembley". Quite frankly the last thing I need right now is more football related reading to do but I get the feeling I'll be back. Some great stuff on here. It's taken me 10 minutes just to scroll through your links!