At face value, Greenock Morton were always a bit too big for the lower half of the Scottish leagues. Their crowds dwarfed the majorty of others in Division Two, let alone Division Three, where a couple of seasons in financial flux managed to send them in 2002. A takeover by the current chairman Douglas Rae made sure they didn’t stay long in the basement, but the ‘inevitable’ return to the second tier didn’t come as breezily as they might have imagined. However, after three flat-pack-assembly seasons of frustrating, clunky, fall-away finishes, Morton finally climbed back up to Division One this past summer. With the champagne finally leaving the crate, Morton have been keen to celebrate, and no more so than today.

The lure of the second level in Scotland may cause some to scoff. It causes Greenock fans to start their queues two hours before kick-off, waiting patiently and politely for an hour before the gates open. You might imagine a certain restlessness when there is pretty much pig-all else to do around Cappielow on a matchday. It is part of an industrial estate on the banks of the Clyde, and although the views across the river to the mouth of the Gare Loch; to Ardmore and Cardross are unexpectedly handsome (the heavy industry associated to this river being much further west towards Glasgow) it is not quite visible from the roads outside the ground. Despite the lack of distraction, the Morton eagerness displays itself in a most polite manner, too much excitement about the new season abounds for there to be too many worries about aggro. 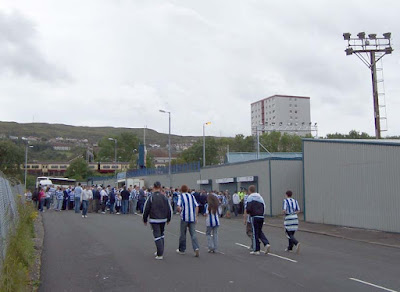 Clearly, for some, the promotion party has never stopped, particularly one yoong lad betraying a heady and giddy summer squealing (I’ll use cod phonetics here) “Champio-Knees” in the only Scottish accent you’ll ever see described as cute. Most of the toddling voices round here merely rank around the ‘well, not that threatening’ mark, but this gleeful young ‘un gets an upgrade cos, frankly, I am delighted to finally be here. Cappielow has long been a bit of a Holy Grail to me.

Y’see, I knew a guy in my music-promoting days in Portsmouth who was a Morton supporter as a boy, although he had downsized to a Pompey season ticket by that point (I like to think through practicality reasons alone). Let me quickly remind you of the fundamental Hobo maths. Quality bloke + faintly obscure football team = Skiffoid soft spot. I have many, but this represented a bit more of a challenge in terms of getting a first hand look. Sure, I am in Edinburgh each August for the Fringe festival, but every year I have come, Morton have always been away from home on the weekend I’m around. Until, of course, this year.

Couldn’t have really a better time to turn out either as, like I say, they are not shy in their relief at finally making it back to Division One. To celebrate, they raise the Division Two championship flag amongst the fans on the Sinclair Street terrace. A flag that has been delivered to the chairman minutes before by four members of the Scottish Infantry parachute display team. The falling men having completed their emotive ballet on landing by disrobing from their protective gear and upturned hammock to reveal Morton strips. At once, several thousand Inverclydians develop a profound understanding of their wives appreciation of ‘Dirty Dancing’. 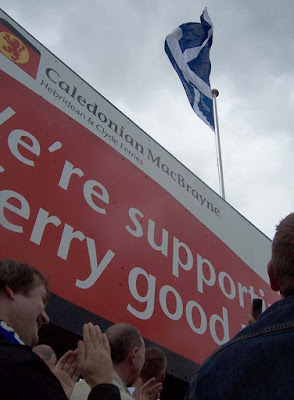 All this ostentation might be a little much for the away support to stomach, particularly as the guidance flare for the paras is placed on their end of terracing, the wind causing its smoke to billow into their increasingly grumpy faces. Disgruntled or not, and whether it is as a result of the ‘accident’ of the smoke or by their design, the away support does appear to have gathered in a distinct pattern. Croatian fans might well be able to form a swastika of bodies on the terrace, but much more laudibly, the Clyde fans have appeared to have arranged themselves today at the top of the Wee Dublin End to look collectively like a raggedy pair of ‘lucky’ y-fronts.

These gathered followers of the Bully Wee (I would leave that alone, but any club nickname that conjures up an image of television’s favourite darts-loving bovine emphatically urinating like a Belgian fountain deserves a cap doffed) however do get amongst some early chanting, trying to reclaim the terrace momentum. A tall order in these circumstances, but if nothing else, they can claim success on a shock value scale, “Banter? From opposing fans? Not heard tha’ for about ten year” says one Morton follower.

After all the build up, the expectation, and the excitement, many a time the Gods of football will send down a grey blanket of realism. A 0-0 is their usual favourite, or a heavy defeat for the promoted side if they are feeling particularly malevolent. However today’s game, from the outset, is everything the Ton fans might have hoped for. Well, perhaps not everything. They won’t have been dreaming of a nervous defensive display in the opening twenty that suggested this was a Christmas-time, hostages vs keen pistol whippers sporting détente. Perhaps we can blame the billowing inflatable tube-man nature of the long-johns they’ve seemingly been issued for the season. 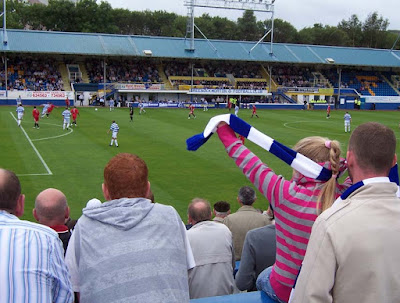 A fingertip save from debut-making keeper Lee Robinson means Greenock survive the first five minutes, but making it to ten is thwarted by Steven Masterson’s free kick which he clubs from the edge of the box into the far corner. One hard-boiled egg into the new season and the Clyde supporters are already confident enough to claim “we’re gonna win the league.” On the quarter hour, as the impressive Christian Smith crashes a lob off the bar, it doesn’t look so ridiculous a boast, but perhaps Morton are merely soft on too many years in the lower divisions.

However, while Clyde look drilled and well connected, the rocking of the bar shakes the Morton players into upping their game, as three minutes later, Clyde keeper David Hutton is required to make an astonishing point-blank double save. Around the pitch the tackles come flying in from both sides, the fractiousness rising on and off the pitch, and things become equal on the scoreboard on the half-hour, Peter Weatherson getting enough of a feather touch onto Kieran McAnespie’s cross to scalp the ball into the far corner.

After a less frenetic period of play, Morton stir the passions once more with a second goal. Kieran McAnespie pistons a free-kick off the underside of the crossbar, and it may well have been over the line, but it will be Jim McAlister’s follow-up that remains in the record books. Not that the Ton could remain giddy for too long as Clyde, to their credit, steam straight back up the other end and fashion an equaliser of their own, another Masterson free-kick skimming off Chris Higgins head like a pebble off a frozen pond. 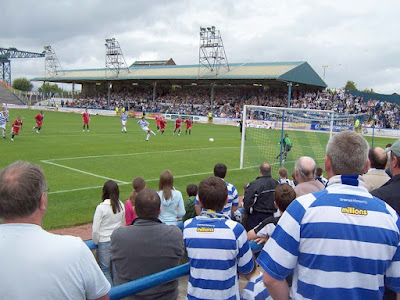 At half-time, as the players try and wind down from such a pacey first period, Cappie the Cat does his mascoty rounds. Bounding along in front of the Sinclair Street end, he ruffles the hair of a young ballboy, who turns and gives the big blue feline a look which says, quite clearly “Ya touch me, ya fucken prick.” Morton arrive back for the second half with the same kind of fighting spirit, a spirit which shows that while the learning curve might be steep, they have their hiking boots strapped tightly on.

After 57 minutes, Morton take the lead once more, Neil McGregor having felled Jim McAlister in the box, allowing Jamie Stevenson to stroke home from the spot. After this, they continue to grow in confidence and begin to play some magnificent football, everything suddenly clicking, as they stampede continually toward the Clyde goal like giddy sk8r bison skidding down a half-pipe, and only another point blank save from Hutton prevents a fourth.

Yet in the 85th minute comes the typhoon through the Mardi Gras, as Clyde get another equaliser from Masterson’s boot. At the other end, Clyde’s keeper celebrates, kissing the badge and arsing around in front of the Morton fans, who soon take great delight in pointing out the linesmans flag. The linesman may well have been the only person in the ground to believe Gary Arbuckle was obstructing Lee Robinson whilst standing in an offside position. However, as the final twist in a thrilling game of football, I’m sure the Morton fans will take it by way of reintroduction to life in the second tier.

By looking at your blogroll, you have quite a few diversified interests. How do you keep up with all of that. (I guess that's what the blog is for, right?)

Well, considering my line of work, I would only fit into one of your categories--comedy!!!

Yes, I'm a standup comedienne from NYC, blogging her way to stardom. I would love it if you stopped by my way and leave a few dazzling yet insightful comments. I'm always on the lookout for new and exciting blogger buddies.

I really enjoyed your report from Cappielow Skif. Your wait to go proved well worth it as you got to see the league flag being unfurled. It is one of the scottish league grounds that i still need to visit and is one of the few remaining 'traditional' grounds. I hope to visit it following queen of the south in January.