If you wish to show your support for Stansted sk8 park, you can now buy a limited edition wristband. It’s good to be in the know. I wouldn’t usually expect to be able to delve into the skate culture in a new town from the parish notice board but here, outside the fetching St. John’s church, is the campaign poster. That appears to be Stansted in sum. A pretty village, the kind that might come fourth in a Britain in Bloom contest and still be delighted, but also with a toughened edge. Outside its small pubs, there are tattoos and voices projected at unnecessary volume, while further along a crowd of boys amble around the alcove of the Post Office, contemplating yet another scratchcard.

Walking up Cambridge Road to the ground, the quaintness barometer goes on a rapid swing. Opposite the entrance to the football club is a series of small houses, one painted Penelope Pitstop pink while the next stands a touch gruffer and more masculine with 1888 embedded proudly into the brickwork. The charm extends to Stansted’s ground, where the stand-alone boardroom appears to be three parts Wendy House, while the spectator seating runs shallow, further along the touchline. 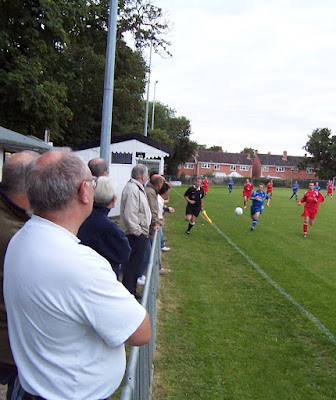 However, they can only stretch to one nice side, as the others are shoehorned in with a variety of fencing from building-site-security to paparazzi-barrier to festival-latrine/Anderson shelter. The reason for the fencing can be explained by the unkempt bush of vegetation at the far end, the clubhouse squarely behind the goal; and the cricket pitch on the far-side. The overlap between the two fields of dreams means that while the home dugout is a permanent structure, the weather-beaten tinny away facility has to be wheeled into place as and when, possibly by an ageing, fly-orbited mule.

A tiny potting shed acts as turnstile, with an elderly gent meeting, greeting and secreting away the entry fivers. Our operative is turned out in what might be described, considering my opening paragraph, as a very Stansted way, his flat-cap, tweed jacket, shirt and tie off-setting a pair of baggy grey tracksuit bottoms. He is clearly excited to be here though, his greetings so cheery that you imagine if he were twenty years younger he’d top off his every welcome with a cheeky leap and a click of the heels. 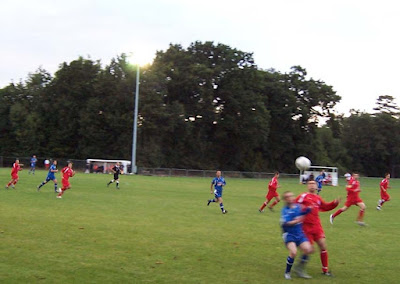 On a night with a distinct community occasion atmos, our old boy is not the only one excited by the prospect of FA Cup action. One chap, in talking to an old associate says, with a hint of toddlerine wonderment, “I’ve been here forty years, with the cricket club n’all, but I’ve never watched the football before.” The Essex Senior League might not drag out the locals in such number, though I imagine their Vase-winning appearance at Wembley in 1984 might have, but it seems the cup retains its magic at its earliest stages, and they don’t get much earlier than this. Being a Friday evening fixture, most likely due to a clash with the cricket club, this is one of the first six FA Cup fixtures of the season. Indeed, it may be the Friday night option as much as the FA Cup that is bringing them out, one man behind me cheerfully suggests as much, as the man to my left loosens his grip on a drowsy fart.

The road to Wembley can throw up a number of new routes for the sat-nav, but today there remains a familiarity, particularly with Stansted due to make the opposite journey in the Essex Senior eight days later. Both teams may well be viewing the cup as a welcome break from league action. Both have played one game thus far and both lost. That, combined with the knowledge that honours were even in their league encounters last season, make this fixture a difficult one to call, and in keeping with that, the opening exchanges see the sides go toe-to-toe.

It is the home side that start to play the more impressive football though and their reward is an early lead, a far post header getting crossed back into the mix, where a toe-poke shot on the six yard line is pounced upon by the keeper like a pillow dropping onto an epileptic rat. The fizzing ball rebounds out to the Danny Dobson who checks inside a skidding, paper guillotine tackle, and places his shot inside the post. Quarter of an hour later comes an unexpected spark of excitement, as a Hullbridge striker Steve Reeves goes in with studs, earning himself a ready headbutt from his assailee, Bradley Walsh. Both find themselves confined to their dressing rooms for the remaining hour.

Stansted remain on cruise control for the remainder of the half and it takes the appearance some new faces from the Hullbridge bench at half-time to bring back some oomph to their efforts. A swift turn and shot from the 14 on the edge of the box races past the post, smacking into the cage at the base of the mobile-phone mast that finds itself shoehorned between the pitch and the social club. Not long after the Stansted right-back muscles a Hullbridge striker off the ball. The forward flicks out with an ankle tap that causes the Stansted man to growl “do that one more time and I’ll knock your fucking…” tailing off to suggest that instead of aggro the Hullbridge man can expect an unconstructive critique of his bedroom action.

Hullbridge are working hard to get back in the game, no more so than their no. 7 who appears reluctant to go when subbed, yelling “where are you getting anything from apart from me?” at his gaffer across the pitch. With ten minutes to go, Stansted miss a chance to seal it, the nippy and impressive Dobson drawing the keeper to the edge of the area. The gloveman’s lunge isn’t quite there and the pass makes it into the box leaving Sam McCarthy with an open goal, but with a defender making a good pressurising run, he spoons a side-foot over the bar. Hullbridge then race straight back up the other end and almost get a shock equaliser, but for an alert tip-over from keeper Matt Cope.

Danny Dobson is, to no-one’s surprise, the architect of Stansted’s game-killing second, running the right-back ragged, speeding to the touchline and threading a pass to Danny Dow to power the ball in. Almost the entire team, led by the scorer, barrel into a group of vocal beer boys on the side for a bundling group hug, which gives rise to a “Stansted we love you” chant, and a yellow card for the scorer.