In Half Man Half Biscuit’s ‘The Referee’s Alphabet’ the suggestion for ‘Y’ was “Yate: the kind of place referee’s come from.” Ordinarily, the town itself wouldn’t notice, unless that ref became eminent in their field. Then, of course, it can be a blessing or a curse, the people of Tring apparently recently complaining for their continual association with Graham “comedy rule of three” Poll. Surprisingly, the people of Waterlooville have escaped punishment despite having offered up Rob Styles as their officious gift to the world. Both Tring and Waterlooville, though, are those “kind of places” and so, I add rather conveniently, is Spennymoor.

Whenever I hear ‘Spennymoor’, I think of 80’s king of the refs George Courtney, it being the first place I was ever aware of a ref having been from, and when I think of George Courtney, I think of an older generation of no-nonsense refs that look as though they’ve been about 48 since birth – also known as the Elleray Principle. While strolling through Spennymoor’s eerily quiet town centre itself, that notion of the prematurely mature Spennyite seems rather appropriate as the light weekend bustle winds down to a shuffle. The twin attractions of Durham and Darlington and maybe even the slightly off-campus ASDA appear to beat that of the Co-Op Superstore and R. Defty’s charming old-money ironmongers on the high street. Even Greggs the bakers here retains its pre-Paddy McGuiness beige livery, rather than the brash, cyberpunk (well, by comparison) blue and orange seen elsewhere. 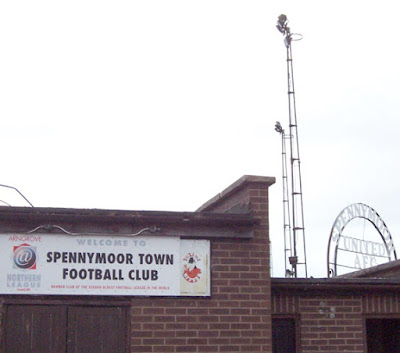 Perhaps what strikes the match beneath the ‘old folk’s town’ smoke alarm most vividly though is the juxtaposition of posters in the travel agents window, between Durham’s current Sumo and Betamax rock and indie club nights, and Spenny Town Hall’s upcoming cabaret attractions – Jess Conrad and Cannon & Ball. Perhaps Spennymoor’s clocks stopped in the early 80’s. Certainly the two ornaments advertising the presence of the local leisure centre would appear to suggest so. Firstly there’s the abstract iron sculpture that depicts either a sprinter tilting toward tape, a ski-jumper or a scene from a lifers prison. Then there’s the large bolt-upright tennis racket that appears to be hitting a splintering Fabergé clown nose, and looks to be the kind of thing that may well have been picked up in a Noel Edmonds post-divorce garage sale.

So, with no one on the streets of a Saturday afternoon, perhaps the people of the town have responded to Lord Kitchener’s rallying cry screaming (and pointing like an accusatory scarecrow) from the photocopied sheets of A4 in the windows of the shops and pubs: “Spennymoor Town needs YOU!!” ‘Need’ is a powerful sentiment, but not entirely misplaced. Indeed, the Brewery Field has played host to so much tragic drama in the last few years; it isn’t exactly clear whether the Land Registry now class it as a football ground or a Greek theatre.

Firstly during Christmas Eve 2003, an apparent discarded cigarette behind a fruity in the social club set the place ablaze to the point that five fire service units were required to bring it under control {Bourne, 2005, p.22}. The bar facility was well placed to serve the local community as well as the Saturday football crowds, thus the fire robbed the club of its main source of day-to-day income. The domino effect, abetted by protracted wranglings with the local town council over the lease on the ground and growing anger from supporters, led to owner Benny Mottram walking away the following Easter, and soon after Spennymoor collapsed leaving a number of fixtures unfulfilled. 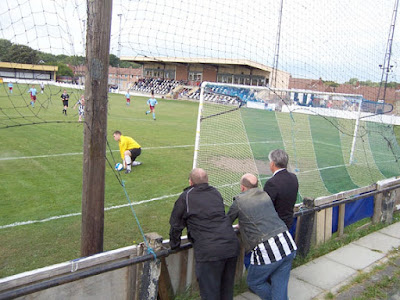 With Spennymoor’s playing record thus expunged, the Northern Premier League was met with unprecedented pandemonium, as clubs who had lost perhaps six points gained, dropped out of promotion positions. The end-of-season play-offs had to be delayed until the FA stepped into to decree that all outstanding fixtures would be treated as goalless but with three points going to Spenny’s opposition. Needless to say, this still wasn’t satisfactory to all.

Spennymoor United, as you might imagine, went out of existence, however Northern League second tier side Evenwood Town quickly moved into the Brewery Field, changing their name as a requirement for securing the lease. Spennymoor supporters of old appear to have welcomed and got behind the new club (although read into the “we’ll always be United” chant what you will) as crowds this season in the Northern League Division One are not that far shy of what United were getting in the Northern Premier League, two divisions higher, the season prior to the collapse.

The leasing problems concerning football at Brewery Field came with the territory for Town and have only been settled in the past month, with a new 25-year term being given over to the new tenants, hopefully allowing for a settled environment that might propagate a climb back up the pyramid for a Spennymoor side. With Evenwood having left their Welfare Ground to escape persistent vandalism (seemingly a problem throughout the Northern League, West Auckland Town’s windows having recently been victim to a number of thrown stones {Amos, 2007, p.18}), they will be glad of the stability now that they have morphed like a cuttlefish to blend in with their surroundings. 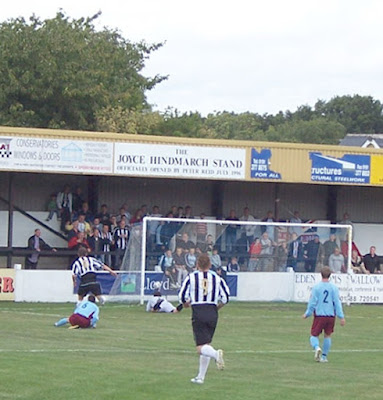 That said, the razed husk of the clubhouse remains by the turnstiles, its concrete-blocked doorways seemingly in denial of the fact that it has no roof, and also means ballboys retrieving misplaced shots from it may well have to be despatched by medieval catapult. It might give them something to do other than irritate the linesman by repeatedly throwing each other’s caps onto the pitch in front of him, as they begin to do just prior to half time. It’s not all bad behaviour though as, at one point, one orange-tabarded nipper sledges the players with a prim “will yous stop swearin’?” As a group, though, they espouse a restlessness, but considering the Spennymoor singing hardcore decamp to the bar five minutes before the interval themselves, perhaps the youngsters are learning from their example in finding something better to do with their time as the game winds down to the break.

Not that the home side’s supporters should feel at all disgruntled as their team themselves go into the break leading their opponents Brigg Town, senior by one tier in the Northern Premier League Divison One South, by a goal to nil. It’s Adam Johnston who scores it, put through the upturned turtle of the Brigg defence before placing his shot through keeper Damien Steer [see above]. 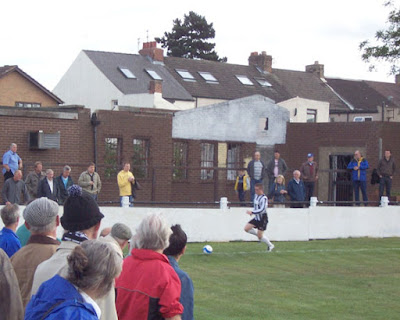 Kicking down the set-square gradient of the pitch’s slope in the first half, it’s been a bit of a breeze for the Moors, so much so that former South African midfielder Graham Robinson is able to make the most of a short break in play to converse with some supporters on the touchline about the weather in Johannesburg. “My fathers over here and he’s wearing layers,” he reveals, adding “I keep expecting to see some of you lot turn up in knotted hankies” about as nonchalantly as one can whilst heading away an opposition throw in.

So, rather than being unhappy with their side, perhaps the Moors fans are a little thirsty from their singing. With “Greasy chip butty” and “Ring of Fire” amongst their repertoire, they appear to gather up fairly random songs like a toddler’s cable-knit cardigan attracts goosegrass and twigs. We are also informed that Lincolnshire, county of the Brigg, is “wank, wank, wank” and that “we hate Sund’land and we hate Sund’land.” They also suggest to the away followers that they’ve “come a long way for nothing” which does seem a touch premature. 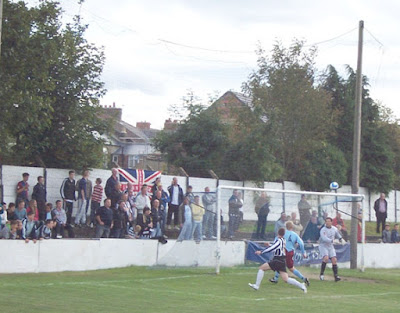 However their team do give them a bit of humility insurance with a second goal after 75 minutes, sub David Manson breaking down the right, cutting into the box and unleashing a shot that’s too hot for Speer, the ball spooning into the far corner off his gloves. With three up-front not working out for Brigg, they opt for a bit of midfield ‘presence’ in the form of sub Steve Housham, a squat figure who appears to have been custom built by a village cooper. They manage to get one back in the final minute, Daniel Barrett prodding home after a bit of shin pelota, but it’s all a bit too late, Spennymoor having taken the second scalp of their FA Cup run.

Who knows how far they can go? The fans think, or at least sing, that they’re “going to Wemb-er-lee”, but I imagine the chairman would probably be happy with making the first round proper. No easy task with three games still to win to get there and with the 68 Conference sides gradually filtering in, but the dangled carrot of a potential game against, say, Darlington or Hartlepool will keep them fighting.

I love the idea of a cyberpunk Greggs. As if it could get much better than it already is...

Great report from Spenny, added a link to my visit to Brewery Field.

I saw Spennymoor's previous game in the FA cup, the 3-2 win over Garforth Town. To say that I'm gutted by last Saturday's 8-2 exit (away to Clitheroe) from the cup is an understatement.

Having origins and close family in Spennymoor, and still travelling back a couple of times each year, I'd say your piece captures the town perfectly.

Am hugely impressed by the layers in what you've written here. Keep up the good work.