Sometimes one needs to return to scenes of great sporting triumph to boost the ego, and sometimes you need to visit the location of your nadir to level you out. Today I am able to do the former, here at the ground currently occupied by Hayling United FC. Not that I’ve strutted my stuff on this football pitch, as it’s brand new really, United having moved here from Mengham Park where the lack of floodlights prevented any further progression for this keen and upwardly mobile club. Hayling United have moved, since 1990, through the Portsmouth and Hampshire leagues and currently top their division as they look to join the Wessex’s Premier Division elite.

However my scenes of triumph occurred just to the right of this new facility, on the part of the Hayling College (nee School) acres that used to house the cricket pitch. Looking now it appears that a set of tennis courts has been built over it. No thought for history some people. No blue plaque on the fence either. The ignominy! Despite this profound lack of ceremony or respect, this is nonetheless the scene of two of my personal cricketing triumphs. 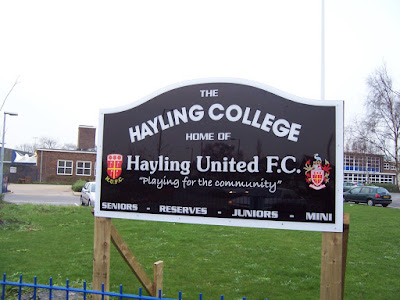 It’s about time I returned here to see it, cos I’ve been reminded of that nadir often enough. I have to pass it every time I get a train from Havant to Portsmouth. St Johns College playing fields [shudders]. Where in the South-East Hants schools cup, our Warblington side put up a resistance so meek, we appeared to be seeking the solace of our inheritance of the Earth once St Johns had rattled off the 14 they needed to win. Yeah that’s right. 13 all out [leg buckles slightly].

In fairness they were a private school with the coaching and facilities lights years ahead of us, but still I can’t use that as an excuse as our Hayling triumphs occurred against a side containing so many struggling, frightened bunnies that, had Channel 4 been covering the game, ‘Mambo #5’ would have been ditched in favour of ‘Bright Eyes’. Mind you in our first season (Year 9) I was captain, and as a direct result of that we struggled through the campaign, and Hayling took us to the wire. Not before me and my opening partner, Sheep, had put on a century partnership for the first wicket. I enjoy the memory of that partnership more than any swashbuckling display on my part. I was out 2 balls after the Sheep, with him having scored 62 and me 31. Clearly I felt the Geoff Boycott approach was right for me. Only without the talent for scoring runs at some stage, or for creating homespun wisdoms involving my mother and a stick of rhubarb. 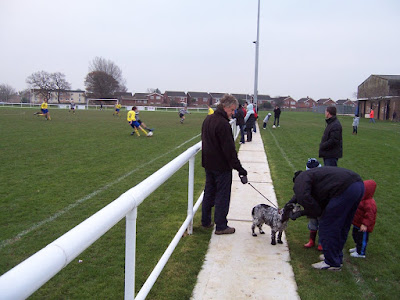 The following year we were much better, and indeed won our schools league (which thankfully St Johns weren’t part of). Our visit to Hayling was much more successful (even if the Sheep did run me out for 6, although in hindsight I think he, having now taken over as skipper, had one eye on the run rate). Thankfully, having switched from bowling largely ineffectual off-spin the previous summer, I was now crashing in like Devon Malcolm, and Hayling’s rabbity rabble enabled me to return my best bowling figures of 3.5 overs, 2 maidens, 2 runs for 6 wickets. Scoff if you wish, but I didn’t achieve much in the game, before retiring, after one decent season with Bedhampton 2nds, at 16. Possibly with the intention of running a pub. I forget.

So, although the position of the sports hall and what have you appears to have been skewed in my memory, it is a small fillip to be back here. Which is just as well as the first half that Hayling and Fawley offer up is pretty uninviting stuff, with the best moment being a Fawley players possibly ball-claimin’/possibly ailment-describin’ shout of “Big. Yellow. ‘Ead!” It is a gritty midfield battle, and the tackling is committed and robust, killing even the remotest chance that either side can offer up any flair or invention. This was not what I was expecting considering Hayling’s last two games, both at home, saw them chunk Stockbridge 6-1, while Blackfield & Langley were rolled for a big 10. 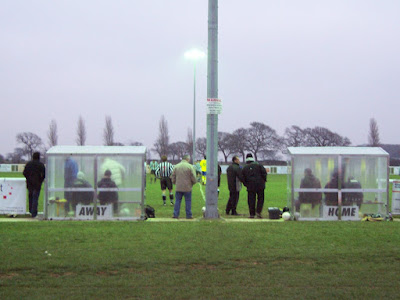 It is even more of a surprise that the best, and largely only chance of the first period goes to Fawley. The ball is threaded through, watched by an attacker and the centre backs, like they’re stood within the loops of a model railway track and a miniature Royal Scot is steaming over the bridge between them. Sensing his moment, the attacker bursts through but the palm of the alert keeper meets his placed shot

At the start of the second half, the game opens up considerably, and Hayling get the first opportunity to break the deadlock. A corner is curled in and pushed away, but a cross comes back and a header goes over the bar when it would have been a lot easier to knock it into the top corner. 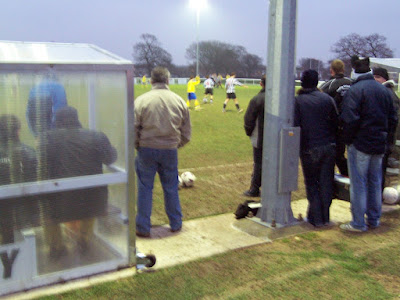 Against the run of play, Fawley break, and a handsome cross goes into the box where Danny Mockeridge places a header through the keeper’s desperate arms. For all the first half dogged action showing so little quality as to betray their level, the goal if exquisite. The Fawley subs occupying the sidelines look startled by the cross “He’ll never get it on a six-pence like that again” is the comment.

Later on in the half, a Fawley player hits the ground hard and looks uncomfortable, clutching his spine. A Hayling player goes up to show sincere concern, his team-mate however comes over to suggest “Is it your back? Stop rolling around then.”

Eventually the amount of balls Hayling have got into the Fawley box pays off, Nathan Kirby turning on a rebound and placing it into the corner. With a great burst of determination, Fawley go straight up the other end and force another diving save from Mark Pannell, who keeps things level and that is how it remains up to the final whistle.

And so, Hayling drop two points in their promotion chase and surrender top spot to Locks Heath, whom they are due to meet in four days time. Despite the top-of-the-table clash to prepare for, they spend time after the game taking down the goal posts and the myriad of tarpaulin advertising hoardings around the pitch barriers. Its a big effort to go to every week, especially considering the signs are written in such small, thin print as to suggest that Kingsley Roofing et al are merely targeting their marketing at the left backs and right wingers of the Wessex League.

I’m sure they get all their roof shopping done online these days anyway.

a brilliant read throughout, saw many grounds I've been to as a non league football follower and laughed at many of your observations.Top notch stuff..