It’s a shame that both clubs involved in tonight’s Surrey Senior Cup contest have an element of chocolate in their strip, otherwise we might have seen the most vivid clash of moving colours since a group of young cyperpunks eager to get to their happening beneath a viaduct somewhere in rural Bedfordshire were left with the single transportation option of nicking one of their Dad’s tie-dyed camper-vans kept only as a reminder of their Grateful-Dead-following youth. More’s the pity.

Sutton United have a tendancy to brickbat talk of their home colours with the phrase ‘chocolate and amber’ when, in actuality, their quartered shirts appear to capture an oddly even displacement of the colours found on the boot-squashed arris of a dirty bee. Perhaps. Corinthian-Casuals used to do quarters, but now have halved shirts, which may be just regard for the eyes of their regulars, considering they match their, ahem, ‘chocolate’ with the kind of vivid pink you only usually find painted on the façade of a novelty confectioners.

For those who prefer their world to be a little more conservatively hued, Sutton have done away with their troublesome brown areas for the evening and instead take the field in a father more fetching green and white number. Plenty of Sutton fans have turned out for it to, despite suggestions that the glamour of the Surrey Senior Cup would not be enough to rouse them. Not so, and many wear their green and white away scarves, keen to co-ordinate on a potentially sartorially-disquieting kind of evening. The home support aren’t quite so engaged in replica wearing, although Sutton fan Taz apparently has beadier eyes, “I saw two blokes with training tops on. One had the Corinthians badge and the other the Casuals badge! Make your bloody mind up gents, you only merged in summat like 1938!” 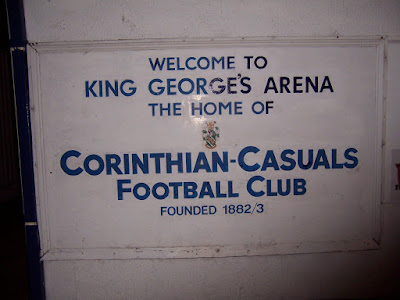 Taz is only a year out. The two amateur sides came together in ’39 with both having histories stretching far back into the 19th century. The Corinthians, of course, carrying that famous name signifying the honest, upstanding purveyors of early association football, and then them Casuals, bringing to mind a load of blokes, with shirts that have long since given up the ghost of covering the navel let along the considerable overhang that lollops in front, burping their way through a shakey 90 minutes on those occasions when they could be bothered to turn up at all.

The reality of course is far more upstanding, and much less hungover. Casuals won the FA Amateur Cup once and this very Surrey Senior Cup, neither of which Corinthians can lay claim to, possibly thanks to their stubborn resistance in their early days to competing for cups or prizes. However, Corinthians can claim to have inspired the formation of a top Brazilian side, a Swedish cup competition and the colour of Real Madrid’s shirts. On top of that Manchester United’s record defeat came at their hands, an 11-3 leathering 102 short years ago. In combination therefore, the modern club can lay claim to a pretty impressive history from both branches of their tree and, indeed, they retain an association with Corinthians Paulista, whose progress they report on in tonight’s programme.

This season, like many others recently, has seen a pretty poor league campaign, and currently they prop up the Isthmian League Division One South. Sutton, from two leagues above, had an excellent record in the Conference National and Isthmian League, and you might now them as the last non-league side to put out top-flight opposition in the FA Cup. Ah, the eighties. However since the advent of Conference South, they’ve had a fairly drab, middling time of it, rattling around mid-table for most of the last two and half years. They can still tap into a large and loyal support though and, like I say, the turnout for this fixture, considering the County Cups don’t usually pull ‘em in until the final is impressive. 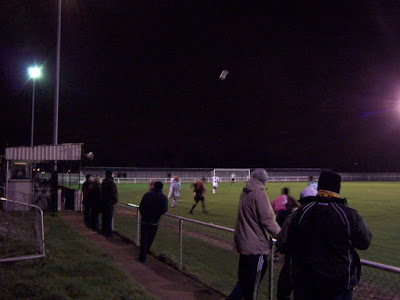 On the face of it, it should be a stroll for the U’s, but you know how cups are. Casuals begin quite impressively, with an unfeasibly quick winger, Jemal Carr, whizzing down the wings. Well, I say unfeasibly, but sometimes these things are a trick of the eye and on closer inspection, the arms are pumping at twice the pace of the legs. That said Carr still causes problems for the Sutton defence, popping up all over the pitch.

As half time approaches, both sides have their best chances of the first period. Firstly Sutton make use of a corner. Alan Bray with his back to goal flicks the ball on behind himself, where Zak Graham does the same but a touch harder and, as a result, flips the ball just beyond the far corner of the beaten goalkeeper’s net. At the other end Casuals’ Luke Gay lays the ball off to Craig Dunne who jags past Ryan Palmer to the by-line but his shot rattles along the fence behind the net.

Casuals manager Brian Adamson isn’t too happy with the officials, but appears too polite to express it appropriately. “Got that one wrong ref,” he says with all the spite and venom of a felt finger puppet. Despite these concerns, his side finish the half strongly.

At the start of the second period, Zak Graham darts between two casual Casuals and hangs in the air to send a side foot volley into the top corner. At least, he would have done had he made contact. It really isn’t Graham’s day, as within the next minute, he sends a shot wide and not long after, when attempting to make space in the penalty box to take a great chance having done all the hard work, he dithers and is dispossessed.

However, on the hour and after a couple of changes, Sutton finally score, a corner bent beautifully by Ross Gaynor over the many heads to the far side of the six-yard box where Alan Bray drops his body slowly forward, his header easily hitting the back of the net. From thereon, despite a few frightening moments, Sutton stroll it, and have a couple of decent chances to take it out of reach, Warren McBean laying off to Lee Hall who crashes a shot which needs Casuals keeper Dave Tidy to palm it away from its bottom corner trajectory. Matt Gray later thunders into a tackle in the Casuals box which rather fortunately sends the ball rapidly towards goal, but Tidy makes a point blank save, and a minute later has to tip a stinging shot from Hall onto the post and out.

So not the authoritative performance that Sutton fans would perhaps have appreciated having turned out en masse, but they’ll be kind of used to it. That man Taz, a regular on non-league message boards, responded to this fixture in a fashion becoming typical of the Sutton support: “We gubbed 'em 1-0…Fcking have that you small amateur club at the bottom of Ryman 1 South!”.