Coming home for Christmas always takes you back to your youth. This is probably why I had to make my pilgrimage to Hayling School two days before the big day. While I’m in town, y’know. It is also perhaps appropriate to come to Fareham for part of it, and not just because my lady friend’s folks are based there (although it certainly helps in terms of getting to the ground in time for a match-stick-eyelids 11:30am kick-off). When I was a kid, this was the place we always came to for a Saturday shop. If only I’d known, at the time, that Fareham were going pretty well in the Southern League and reaching Trophy semi-finals, regular FA Cup 1st rounds and such. It could have been so different.

Instead, my focus on Fareham was Gamley’s toyshop where, I would insist, with all the over-eagerness of a stand-up night promoting hyena, that I should be left for the duration. I’m told Gamley’s has now gone, which is a great loss to Fareham and children of the South Hampshire region, but then Fareham has been usurped a bit. Time was, Portsmouth and Southampton city centres had precious little about them and as such the sub-nuclear family from Havant might go for the subtle glamour of Fareham’s Arcade. Then Portsmouth built Cascades and later Southampton knocked up the behemoth West Quay. Not that one should infer any competition between the two cities. They get on like a house on fire. A house on fire that each refuses to piss on, believing it to belong to the other.

It is not like this between Fareham and Gosport. It is arguably the Wessex league’s big derby, but frankly it has all the niggle of a Tibetan jumble sale, certainly at board level anyway, with the Fareham chairman at pains to express his wish that both clubs might be promoted for the good of football in the area. But, you might contest, surely crusty old directors always say stuff like that, as they press the flesh and cram down the biscuits in the half-time hospitality? Well, I’m here to tell you that Havant & Waterlooville’s antipathy towards rivals Weymouth is possibly more keenly felt in the boardroom than it is in the terraces and, trust me, if you met some of my fellow Hawks, you’d understand that is going some*. 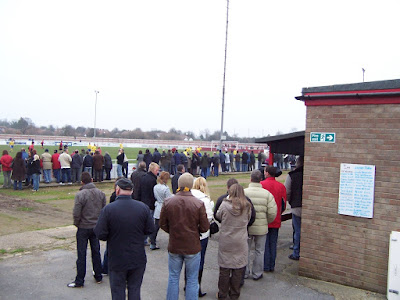 Of the two sets of fans present, it is the Fareham crowd who are the more vocal, and it is they who try to inject a bit of derby day angst early on with chants of ‘Dirty Turk-town bastard’ and ‘Can you hear the Gosport sing?’ (for the record, no-oh, no-oh). So efforts are being made to nasty this up, and with both sides going for what may be a single promotion place this season along with about six other well-placed teams, the importance of today’s game goes beyond the local aspect.

With that in mind, the referee has clearly come expecting a Friday night town centre free-for-all, and controls the game with the giddy strictness of a drunk-with-power milk monitor. Early in the first half he has cause to go and speak to Alex Pike, manager of Gosport (see below). “Calm down. You’re getting over excited.” Says Pike.

Placated, but patronised, it is no perhaps no surprise that within a minute Fareham are awarded a penalty. “He’s doing this deliberately” suggests the disbelieving gaffer. However the steam billowing from his ears subsides as the taker slashes the ball wide of keeper Gareth Barfoot’s right hand post, despite a premature yelp of ‘Yeaaah’ from behind the goal.

The taker of said penalty was Gavin Jones, briefly one of many a stop-gap in the H&W right-back berth. That’s half the reason I come to games like this, to check up on our alumni now plying their trade a touch further down. Jones was only ever a bit part player, but on the other side of the coin, Gosport’s sub keeper Mark Brown played for the majority of H&W’s debut, promotion-winning, season while Fareham’s Dean Blake made 150 starts and 46 appearances from the bench between August 2000 and January 1st 2005. Fareham are chock full of ex-Hawks though, with defenders Luke Middleton and Owen Elias having played for the senior and reserve/youth teams respectively. Indeed seeing a grown-up Elias is the biggest shock. Four years ago when I was watching him play for our youth team, he was this cheeky little imp. The change is quite startling as now he’s a huge beast of a dogger in the Brian Kilcline mould, and with his greasy, straggly curls giving him a very hulking, South American look. Well, that’s at kick off anyway. By the end of 90 testing minutes? The Hunchback of Ivan Campo. 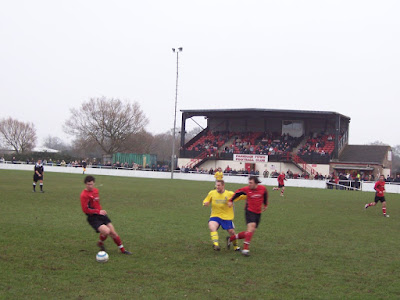 It is Blakey though who I’m mainly here to see. As I documented on the Cheer Up Alan Shearer site, whenever I’m asked about my favourite goal, my thoughts turn instantly to Deano, and his 30 yard thwack at Welling**. In the end he proved a little too lightweight, but many were sad to see him go, as he certainly entertained with his jinky little runs down the left flank. Plying his trickery in front of the main stand, and therefore the match sponsors, and usually in the second half, also meant that while he may not have left West Leigh Park with a tail between his legs, he certainly left it with more than his fair share of Man of the Match champagne stacked up in his garage.

Now, at Fareham, he carries himself even more in that Paul Merson way, y’know, four days worth of beard on the chin, drifting across the pitch and running on the ball like he’s carrying a couple of suitcases. Thirteen goals thus far this season suggests he’s found his level or even that’s he’s now punching too far below his weight, although his showing today suggested that he can still blow hot and cold. 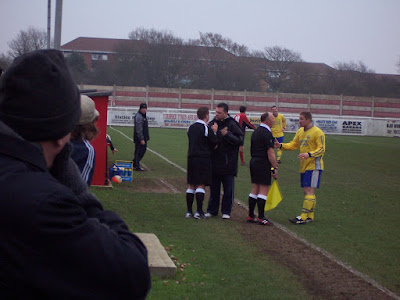 Anyway, yeah, penalty missed (see above) and although Fareham have the better of the opening twenty, come the half hour mark Gosport come fully to life. A cross from Kevin Gill beats the slipping Hunchback but his pass across the line is welted away by James Dunk. Not long after though, Warren Byerley breaks for Gosport and his cross is dummied by Neil Scammell for Adam Camfield to leather a shot to the centre of the goal. An attempt to block by Darren Watts merely sees the ball fly in off the top of his boot. After this the half peters out somewhat rapidly.

Come the second half and the ref finally exacts his full revenge for Pike’s insolence in the first half, by sending him off, not only beyond the pitch barrier but to the stand on the opposite side. “I was talking to my player” he protests in tantrum, before eventually wandering down the touchline mumbling “Merry Christmas” like a pre-tea bedroom-banished elf. If only he hadn’t told him his name.

Fareham have a bit of momentum at this point, Warren Hunt just going over with a curling shot, however this soon dies as they are reduced from 11 to 9 within the space of a minute as first Danny Horrell picks up a second yellow for crashing into the back of a Borough player. Then, for arguing with the decision, Hunt follows in similar fashion. Later, through the wall dividing spectator toilets and dressing room, Hunt is heard making a less than convincing defence of his case, “I didn’t swear at him, fucking ref.”

Despite this double-tunnelling being clearly to their advantage, the Gosport supporters are just as tired of the referee’s over-officious nature, “Get a new set of cards for Christmas, ref?” and “Is there anyone you haven’t booked yet” being two shouts from the away support. To compound Fareham’s problems, it is not as if they have many options on the bench, having named only three substitutes. One of those is their coach, former Middlesbrough and Portsmouth man, Joe Laidlaw. Surely a chap with solid Football League pedigree like that could offer something in this bleak situation, you might think. Well indeed, but possibly more so had his career started a touch later than 1969.

Although they dispense with the notion of throwing on Laidlaw, 57, to join his 30 year old son up front, Fareham nonetheless pull together and only concede one further goal, from the boot of Byerley, and even mount defiant attacks of their own. Despite having so much room when they counter attack, Gosport are wasteful. When Gill beats the offside trap to race at keeper Lee Webber, he tries to go it alone, trips over the ball and before it can reach Byerley, Elias is able to clear.

So it ends, Fareham having not taken the opportunity to go level on points with Gosport in third place. There’s a lesson here too. Before a big game, it may not be the best karma to put in a teaser, listing 15 clubs from the league and steps 1- 5 of the pyramid, and asking what they have in common, when the answer is that they are the only clubs in the country to have scored in every league game.

One fewer now then.

* to obtain a view from the other side of the divide, you could always read Mincin’ Ian Ridley’s endlessly whiney memoir ‘How to Run a Football Club’. Or better still, flick through it in Waterstones.

** Mind you, he might have to share that honour now with Richard Pacquette. After leaving Fareham I headed straight down to Havant for our afternoon game with Bognor. Our second goal, from Big Rich, was simply incredible. Very much like Matt Taylor’s for Pompey a couple of weeks prior. Richard’s effort may possibly have been slightly nearer the box, but with less of a gap between keeper’s hand and bar to aim at and, frankly, it was for us. So it was better. QED.

Just to put the record slightly straighter Skif the Waterman that played for the Hawks was Lee, the younger brother of Dave.

Dave played for Oxford and 'gulp' Weymouth, before retiring from full time football during his little girl's illness.

Of course. How forgetful of me.

Not that Lee's 3 appearances pulled up any trees.

I blame him for his unmemorability.

As my forgetfulness produces an error of fact, I've amended the report, but to make sense of Simon's comment, I retain the original paragraph here.

"The taker of said penalty was Gavin Jones, briefly one of many a stop-gap in the H&W right-back berth, as indeed was Gosport’s Dave Waterman, also playing today. That’s half the reason I come to games like this, to check up on our alumni now plying their trade a touch further down. Jones and Waterman were only ever bit part players, but on the other side of the coin,"

"all the niggle of a Tibetan jumble sale"

"the giddy strictness of a drunk-with-power milk monitor"

Still the king of the witty comparison.

It's reasonable to say that 400 for a crowd in the Wessex League is pretty big, isn't it?

Very much so. Didn't seem like that many when there, but with a division average in the Wessex Premier of 94 (thus far this season), it certainly was pretty impressive. These are two former Southern League clubs with a long Boxing Day derby history though, which helps.

Next highest in the league this season is 350 (the Isle of Wight derby between Brading & Cowes Sports).

The lowest crowd of the season in the division is the 20 who watched Horndean v Bemerton Heath Harlequins.