Nil nil. The drab un-monogrammed hankie. The empty washing line. The flaccid Christmas stocking. Nil all draws exist only to suck all the goodness from your watching eyeballs, and leave you vim free and open to suggestion from those campaigning for the benefits of a life of apathy. Well, I say campaigning, it’s more a shrug followed by a heavy flop into a beanbag. You can flop too if you wish. Y’know, whatever.

So zero goals = zero entertainment, right? Well yeah and no, cos I’m not going to tell you today’s game was a classic, but it’ll do for us. It was a middling game in a ground with not a great deal to distinguish it, except perhaps for the small potting shed positioned, like a prototype Tardis put aside for scrap, along the terracing at the half-way line. 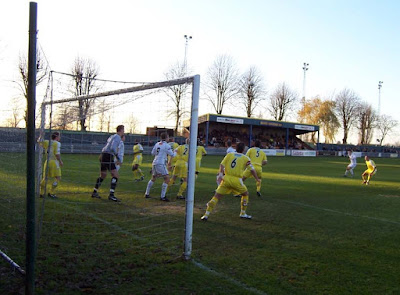 All the evidence points then to a clear truism. That nil-nil’s exist only to warn one what the feeling that follows our final breath, but before our eyelids fall shut, will be like. Well, I’ve certainly seen games like that. Watching H&W draw without goals at home to Crawley on a Sunday in 2001, the day after we’d lost 4-0 away to Burton (this being during a particular insane end-of-season fixture pile-up, 17 games between 29th March and 5th May folks) was indeed much like watching the last drop of moisture evaporate from your long dead pet guinea pig. They are not all like that though, and I’ve seen goalless games with plenty to thrill. That doesn’t describe today exactly, but there have certainly been a lot worse.

Today, it was just a bit grey. Nothing wrong with that in the wider scheme though, as I’ll explain later. We had chances. Mo Harkin crashing over from the edge of the six yard box as the ball dropped onto his waiting foot like a feather on an Everest window’s sill. That was one. Richard Pacquette ballooning on the turn from a similar position. That was another. It’s fair to say though that Braintree had better ones. The top of the bar was flicked by a bouncing effort. One shot sent the back of the stand into uproar before they saw the ball continue its progression beyond the goal, having taken a detour round the tradesman’s. Most alarmingly, a goal line save from our Shane Gore was required in the last few moments to keep things even. 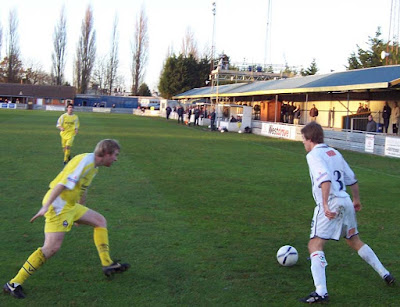 Yet we leave with a point and that could be vital as we continue to challenge for promotion. Our cup run may now be over, but we’ve got plenty else to keep us occupied. In two weeks we will host the increasingly accomplished Conference National side Gravesend & Northfleet in the 1st Round Proper of the FA Trophy. Another good test against higher level opposition to excite players and us fans alike just there, but add in the fact that the Fleet are managed by Liam Daish, one of the management duo that took us to them Trophy semi’s four seasons ago and arguably thee iconic figure that epitomises the rapidly shifting ambitions and expectations at our young club, and it becomes tastier still.

However that is still just a distraction from the main aim, that being to join Gravesend, amongst others, in the Conference top flight. Currently we occupy the final place in the play off zone, with games in hand on most of those above. Furthermore we face the side two places above, Salisbury City, next weekend and find ourselves presently as clear leaders in the form table. No defeat at home (we’re not counting Fratton Park as genuinely home here) since the opening day of the season and, in fact, no league defeats at all in nearly three months.

With that in mind, I’ll happily take a point away from home against as determined and defensively well organised a side as Braintree. It’ll be those moments of keeping clean sheets (ten in all competitions thus far) when the creativity isn’t hitting its potential heights, of digging in when opponents can put up a genuinely tough fight, that will prove decisive. If we have to get used to that in away games to get to that goal, I’ll take it and turn up for as many nil nil’s as you can throw at my increasingly excitable self. Indeed, it was only ten days ago I was watching us at Hayes and that was just as attritional for the viewer, neutral or partisan, as today. Yet we won that one, with an 87th minute goal, despite playing for a great deal of the game with one man fewer, before the ref kindly evened things up.