A turnstile feels a little obsolete when sited next to an open gate. It may even feel a little unloved, if its yer sensitive sort of turnstile. Alternatively, if it’s your white van, Nuts-on-the-dash turnstile, it may simply feel like it’s being cheated out of some quality frottage. Just ask celebrity grinder Moby how he feels when he’s prowling a dancefloor that ain’t ever going to get close to being packed. Either way, your turnstile is missing out on human contact in one way or another. After all, who pushes through when you can continue your stride uninterrupted?

Yer football fan, that’s who. Well certainly me, anyway, and who better from whom to generalise, eh? Saturday afternoons haven’t really begun until that click and a whirr that says “well, yer names not down, but your moneys good here son”. Mind you, here the turnstile is just the first bit of a short assault course that also requires one to traverse a set of automatic doors. “Open sesame” is apparently the key here, and you know what, a booming exclamation of that in front of these sorts of sturdy glass dividers has never failed me. All this before I’ve even paid too.

The turnstile (or open gate for those with a blackened heart) is merely situated next to a non-plussed leisure centre attendant. The financial transaction takes place beyond the magic doors, where stands a man. Just the one, behind a trestle table, beaming an eager but nervous smile, like a village fair stallholder selling nothing but a mandarin and pickled radish preserve. When it’s six notes for yer in and a thin programme, the facilities numbering two broken Coke machines and the nearest tea-bar being at Leyton Orient (I imagine), you can understand the hint of awkwardness in his cheekbones.

Welcome to the Mile End Stadium, home of several runners, Sporting Bengal and Essex Senior Leaguers Beaumont Athletic on alternate weekends and, for one night only in 1995, Blur. Furthermore, welcome to the Kent League. Only we’re not in Kent. Welcome to football (to translate from the impenetrable German). Only it’s in a run-down, austere athletics stadium, tucked away amongst the hanging gardens of Tower Hamlets. 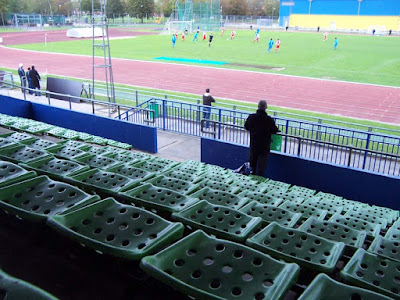 To cut it short, not a lot of love abounds here at the Mile End. The team representing the Bangladesh Football Association (UK) doesn’t appear to have captured the imagination of the ex-pats. Maybe it’s the location, but it could just be as a result of the results. Wins are few and far between, and the demoralising hammerings more than occasional. It appears to also be affecting attendance on the bench too, theirs being as empty as a peapod freshly addled by Etiella moth larvae. For some managers, strength in depth and player selection make it hard to avoid sharp headaches. Luckily for SBU gaffer Sana Miah, he just needs to take it easy with the Häagen-Dazs

Of the 35 in the crowd today, the best part of them are here with Erith & Belvedere, recent drop outs from the Southern League after 23 years of service, and resplendent today in red and white quarters that you might normally expect to find wafting from the mast of a regatta skiff (no relation). After a third minute scuffed shot from Ahmed Salvador, it is the visitors who expectedly make the early pace, a cross skimming the crossbar as early as the second minute. To make himself heard over the athletics track, our gateman/programme seller/#1 fan is raising his voice regularly, his attention particularly directed at an “Abdul!” Which of the three, he doesn’t appear to specify.

A cross from the lively Mark Nougher finds Steve White unmarked six yards from goal, but he somehow manages to drop it over the bar. For all E&B’s massive possession differential, the flailing, desperate legs of the Bangladeshi side manage to hold out for the first half hour. Having unsuccessfully thrown so many balls in the direction of the target, the visitors nevertheless press on with the same determination as a shy teenager on a fairground first date with three coconuts, a giant cuddly tiger and the potential of an over-the-jumper fumble behind the hall of mirrors, in his sights.

Rather than giving up and going two’s-up on a toffee apple (and settling for holdings hands on the walk home), Erith & Belvedere’s focus and determination finally pays off in the 32nd minute. Score! Matt Bedford skips a challenge on the right flank, and the linesman flags like someone shaking their umbrella to try and attract the attention of an erstwhile colleague through the shut lower-deck window of a packed rush-hour bus. The alert referee bellows a baritone ‘Advantaaaaaaage’ as though alerting distant Atlantic shipping to a submerged rock hazard, holding the final syllable of “aaaaage” like a Brazilian commentator trying forlornly to prevent the running over of a beloved family pet might shout ‘No’. Before he can complete the call, Bedford’s cross has been flicked in by Glenn McTaggart, on debut, and never has a ref looked so please with himself, although he does resist the obvious temptation to undertake a Robbie Keane-esque somersault/bow-and-arrow ping in the direction of his assessor. 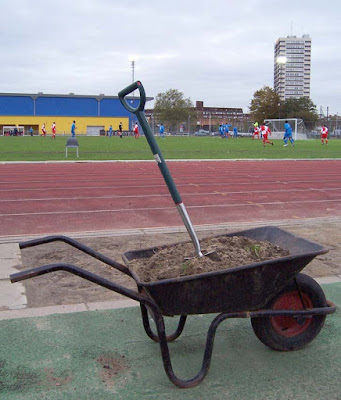 There is precious little strength in Sporting Bengal’s play, their midfield showing all the alertness of an ageing bloodhound five seconds out of an interrupted Sunday lie-in, and it is easy for the Erith side to barge through their defences, despite Hamza Sadouk’s lone show of resistance at centre-half. However, he is let down by his partner, captain Abdul Khair on the stroke of half-time, as three Erith players are played onside and find themselves bearing down on keeper Pape Diagne. Tom Maycock keeps the ball and finds the top corner with ease. “A good fucking five yards off lino, all three of them” says blame-game player Shahid Ali who, rather ironically, finds himself replaced at half-time.

After the break, as the players mill about on the field awaiting the officials, Mark Nougher finds time to chat to some of the travelling support. As he peels away, shuffling toward the pitch, he catches a stud on the lip of the running track and collapses as though targeted by sniper. Laughter envelopes his team and their support. Sporting Bengal, however, are struggling to find anything funny right now as they are not known for turning around deficits of a single goal, let alone two.

Within a couple of minutes of the restart, it becomes three, Erith captain Steve White easily bustling through the clearly uninspired SBU defence and beating Diagne from close range. The passing and clearances from the home side are too panic-stricken, one snatched pass slicing in the direction of the E&B coach who stops it with his thigh somewhere between a camp long-barrier, and a genteel curtsy.

Not that SBU go through the game chanceless as Sadique Ali and Saim Uddin around the hour mark make sure Neil Murray in the Erith goal didn’t go through the game with only hypothermia to concern himself with. However with twenty minutes to go, SBU show again why they make it easy for teams to score against them as substitute Adrian Deane scores an almost a carbon copy of his captain’s goal, crashing a shot from the edge of the area in off the far post. 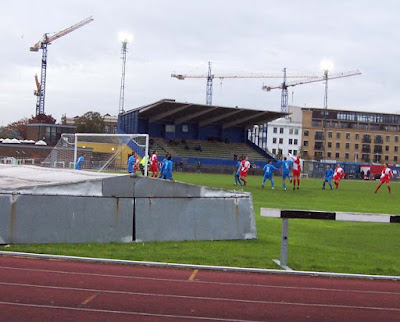 In fairness, while SBU do collapse it could well have been a lot worse and its not backs-to-the-wall stuff. Beneath the sight of the light pipping from the tip of Canary Wharf over to our right, Sadouk forces Murray to save with his legs with ten minutes to go. Not long after though, E&B complete their rout, White again collecting a pass and powering through, drawing the defence and allowing him to find Deane unmarked at the far post, who volleys home.

The final chance of the game, kinda sweetly, falls to the home side, a wayward backpass allowing Rashel Rahman to scoop the ball from in front of the keepers hands, but cruelly the ball rolls down the net having just cleared the crossbar. So sparks of fight in the Bangladeshi side until the end, but too many periods of play where the players seem to accept they were second best.

Someone needs to love them. Get behind them, and make their players believe in themselves a bit. I could try, but then I’m already in love with another, and I’m in no mind to cheat. I could try to like them a fair bit, spend a bit of time with them, getting to know them. Maybe. Let’s just say for now that this site will almost certainly catch up with them on their travels at some point in the future.

Yeah. You be excited.

I would like to say that "Erith and Belvedere" is possibly the most brilliant and beautifully British name for a football team that I have ever heard.

Cheers Lord B! Nice name for a couple of not particularly lovely parts of Bexley borough. In the old days Henry VIII had a naval dockyard in Erith and the Gunpowder Plotters met here – now, as the late great Erithian Linda Smith put it: “we don’t have a twin town, we have a suicide pact with Beirut”.

Mind you, for great team names you should have been around in the 20s when we played the likes of Bournemouth Gasworks and Leavesden Mental Hospital.