After Brackley, eventually, I found out our draw. Like I said, my initial feeling wasn’t the one I’d expected upon the picking out of our first FA Cup meeting with a league club, particularly one that contested the final of the damn shebang two years ago. It was a slight sense of foreboding, and I’ll admit this was perhaps based on a prejudice based on my previous dealings with our randomly chosen opponent’s support.

However, come the next day, the idea of us playing a League One side had won me over. ‘IT’S GOING TO BE BRILLIANT’ I think I signed off with after the Brackley sketch, but with the caveat that I could edit that later with the benefit of hindsight. Well, I won’t do that but turns out my first instinct might have been the better to trust. The last two weeks in the life of Havant & Waterlooville Football Club have been long and stressful. I’m just thankful, in a way, that I’ve not been in the region to take in the day to day hype.

Would have been great if that hype could have centred on us playing league opposition at West Leigh Park; the possibility of an upset; just generally putting the word out to the local populous that we don’t get our team out the boozer. Mind you, The News (South east Hampshire’s local rag) did do the usual ‘what their day jobs are’ feature as part of their coverage but when this comes as part of an eight page pullout on the day of the game, you can ignore the fact the unmasking does strip away the mystique a bit. More on that later though.

However, the majority of the coverage, which even hit the national press and radio, centred on the fact that I was not the only one with a sense of foreboding. Hampshire Police Force, bless ‘em, were more than a little anxious by the usual stuck-in-the-70s bullshitters giving it all that on the Millwall and Portsmouth web fora. Thanks to them (and I would digress here into a tirade about the mass of hoolie-porn that litters the sports shelves in bookshops nationwide, but this past 15 days has seen enough heads banging against brick walls), the ol’ Bill told us our big cup tie we’d long dreamed of, could not take place in our ground. 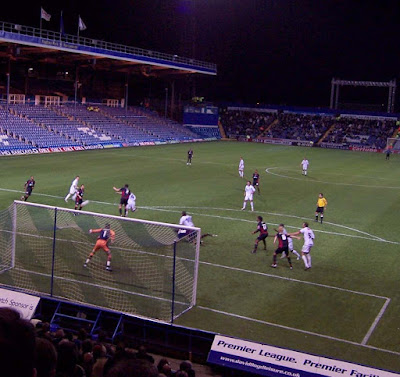 Some lacking possession of the full facts might assume that we’ve squandered money on ex-pro star names but, just so you know, West Leigh Park is perfectly sufficient for hosting all of the League One and Two clubs in the FA Cup. Except one.

Sadly, Portsmouth and Millwall’s ‘past’ meant the game was moving further and further away from being anything about us. Except in the fact that Hampshire Police decided that Millwall fans being let loose in the wilds of Leigh Park wasn’t something they wanted to deal with. So our home cup tie would have to be moved. Gutted. All round.

To Fratton Park then. At our cost. And a complement of 110 officers and seniors. At our cost. Little Havant & ‘Ville v Millwall. A category C game, apparently, one down from an international, and a bill for policing that mirrored almost exactly the invoice that would have landed at Soho Square after last summer’s Cup final. Thirty-five grand. Ker-ching. 7,800 tickets would need to be sold for us to break even. As it turns out, we fell short, well Millwall only brought 411 in the end (nice friendly getting-to-know-you ratio with the cop turnout there), but not as short as I’d feared. Still though, the best part of a ten grand loss from our best ever cup run. Really not the way it’s supposed to work. Especially as for the second year running, one of our local rivals has pulled Nottingham Forest out of the hat. Humph. Y’know, if Santa came down the chimney, bitch-slapped your Nan and nicked your wallet, you’d struggle to keep hold of a sense of magic there too.

Yet, I remain enraptured by the FA Cup. Yeah. Can’t help myself. I thought I’d get all the bad stuff out the way first so I could tell you about the best night of my Hawk-supporting life. And it ranks pretty highly in the overall table too. Like I said, “it’ll be brilliant”. And it was, after it had been shit. Then it was brilliant again, and I guess a bit shit at the end but, it was brilliant, and all because of twenty minutes. Not long in the overall scheme, considering I’ve lived for approximately 15,024,300 of them prior to the final whistle, but after two weeks that really dragged, we deserved those twenty minutes. Those twenty minutes that, frankly, went too quick. I personally think we deserved more. But I would do. 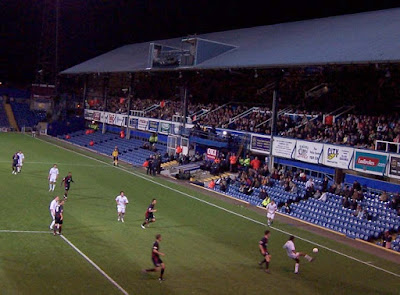 But yeah, once the starting pistol had fired, it did turn a bit poo quite quickly. Sod the fear of hooliganism ruining the night, or finances tearing our club apart, my pressing fear here was the tanking, when semi-pro clubs don’t manage to do their ranks proud. After all, only two days before, Northwich Victoria, from a level above ours, got rolled over for eight at the Withdean. Mind you, on the other hand, Basingstoke, bottom of our league, did for regular Premiership scalpers Chesterfield. What to flippin’ fink, eh? Eh? Think those in my company might well have got a little hacked off with my over-active nerves. Travelling down from London with Millwall and, from Havant onwards, several police on board didn’t help them shakes, and neither did a 5th minute goal for Millwall that betrayed, amongst the H&’Dub side, some nerves of their own. So soft was it, you could have marketed it as high quality toilet tissue.

For the remainder of the first half we put up a creditable fight, but Millwall’s route one, counter attacking effort was certainly testing our defence. Segregation not being so familiar to us, I’m not used to watching our defence at work at such close quarters, and I’m not sure I like it. Furthermore, our boys didn’t seem to be reading the game particularly well, anticipation of the dropping ball being a little lax. However, we made it to half time without any further damage, and with the promise of a half spent attacking the goal beneath our vocal support in the Fratton End. Some Pompey fans probably did join in with our tried and tested material, and it did sound good to be amongst the singing, but it was therefore difficult to tell how many of the 5300 were getting amongst it wiv us herberts. Certainly at the back of the Fratton End stand, pockets of the curious broke into chants of ‘Play Up Havant’ of their own. Is it wrong that I should wince at that? After all, these were the people we needed to turn out, and spend their hard-earned. If they have only one tune down pat, shouldn’t I award at least marks for effort? At least it wasn’t the baffling ‘Play Up Pompey’ that some had promised us. Like I say, these were the good guys. Turned up, and certainly wanted us to win and, around about the 65th minute, they also BELIEVED we blinkin’ WOULD.

Five minutes earlier, we’d scored, see. Rocky Baptiste (well, who else) tapping in after a majestic move that allowed Mo Harkin to dart along the touchline and make it nice and easy for our net-troubling hero. There it was. The best moment of Hawkdom. Ever ever. 1-1 each with Millwall of League One. This was the twenty minutes. We battered ‘em. Luke Byles tested Lenny Pidgeley. A Richard Pacquette header was pawed away. It was something else, the atmosphere was awesome and when the goal went in. Oh my oh my. Apparently BBC Radio Five Live were covering the second half (just when I thought things couldn’t get any more unreal). They chose the right half.

The twenty minutes ended though. All good things do. Mere seconds after that close call from big Richard in fact. Alan Dunne belted in a brilliant 25 yard shot through Shane Gore’s hands and into the top corner. Against the run of play. Cruel. Well, anything more certainly would have been but our Shane produced a series of remarkable saves, including an astonishing double stop at his near post. And then it slipped away, but for all the fiscal worries, we could forget about them for that little bit, because through the expectant roar, as well as the prolonged, beyond ecstatic, goal cheer that it followed, the Hawks and the curious came together to believe. Really believe.

That’s the magic of it.

How many calories do you need each day? To learn more, please visit Weight Loss