Situated just south of Bury, just east of Bolton and a short tram ride from Manchester, it is perhaps unsurprising that there is hardly anyone filling the seats in the stand which stretches the length of the Bury End of the ground behind the goal. Mind you, it appears the FA Trophy magic generally ain’t packin’ ‘em in in Greater Manc., as todays attendance is fewer than turned up on a cold Tuesday night ten days ago to watch them lose to Maine Road in the Manchester Premier Cup.

Perhaps it was that cup defeat that caused an ennui to set in, a sense of gloomy inevitability in knockout tournaments. After all Radcliffe’s FA Cup challenge fell over Skelmersdale’s trip-wire first time out n’all, not to mention their extra-time dispatching from the Unibond League Challenge Cup by Bamber Bridge this past midweek. Would that feeling be trapped in the player’s legs today? One would hope not, particularly when facing an unfamiliar opponent such as this. With Stamford being part of the Southern League set-up, and Radcliffe the Northern Premier, chances for these sides to tussle are few and far between and this, to me, is the appeal of the Trophy. Mind you, there is still regionalisation of the draw for the qualifying and early rounds, so a pairing such as this isn’t exactly usual, hence my raising of the attendance from a meagre 155 to a mammoth 156. 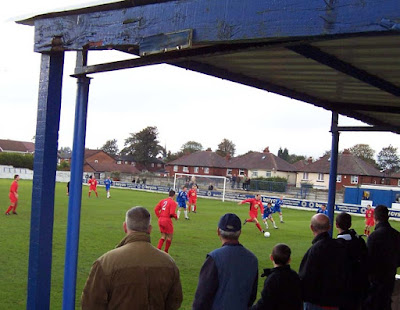 I can understand why the Trophy doesn’t capture the imagination of others though, as it another player-sapping tournament for which most sides have precious little chance of winning and doesn’t offer the same potential fiscal rewards as the FA Cup. Still, having seen my side reach the semi-finals, which saw us take both a trip into Northern Premier League territory (Colwyn Bay) and a Conference National scalp en route, the idea of going on the same dizzying ride again, particularly with the added carrot of a trip to the new Wembley, well, I’d take that over a kick in the cock, certainly.

Am sure there are at least a few Radcliffe fans who would fancy that kind of thrill too. Although mostly a quiet bunch, amongst their number are a pocket of five middle-aged fans trying to inject some atmosphere of their own. One of them carries a loudhailer which, despite managing to muffle the user’s voice to a point where a library whisper might carry further, is a bit European, particularly in the context of the rattle he wields with his other hand. It’s a bit of a beast, and appears to have seen better days, looking like it’s been fashioned from a length of old fence that’s sat behind the shed since the 50’s. 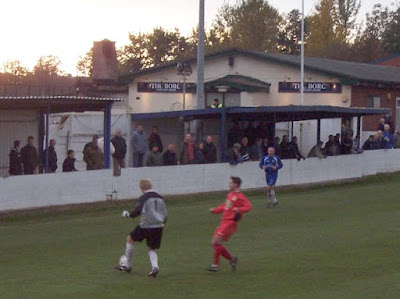 It’s a good visual metaphor for Radcliffe Borough really, appearing at every level to be a working man’s kinda club, both in terms of their social set up and their ground as a whole. As such Bernard Manning being the entertainment at their next quiz makes sense, as does the fact he’s their president (son Bernard Jr. being chairman here) and, in keeping with Mr President’s liberal thinking, on one side of the pitch is a large hoarding reading “Give racism the red card”. Pleasing to see at least one Radcliffe supporter wearing a 'Kick It Out' sticker too. Given my preconceptions a good slap anyway.

The Radcliffe side begin the game slowly, with Stamford controlling the first five minutes. However, it is the home side who score first, Martyn Forrest meeting a cross from Lee Duffy on the right flank at a point somewhere between his brow and nostrils. Untidy maybe, but effective. Stamford do not lie down though and, despite looking fairly ordinary in the final third, equalise in the 19th minute. A free kick is floated in by Scott Taylor and Radcliffe keeper Danny Hurst running out is beaten by the head of Gareth Pritchard. Within six minutes, Pritchard scores again, this time from the penalty spot after Stuart Wilson’s legs are whipped away illegally by Tony Whealing. For his inauspicious efforts, keeper Hurst finds himself replaced at half time. 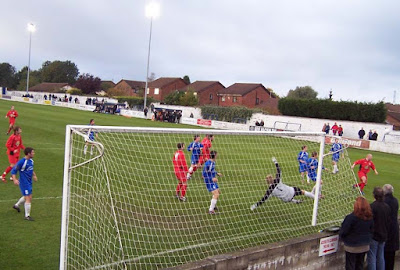 Come the second half and Radcliffe up their game in search of an equaliser. They force an early corner, which is played into the near post, Andy Heald appearing to try to angle the ball in with his wang. It doesn’t work. The angle. It is one of a number of Radcliffe crosses that incisively split the Stamford defence throughout the half but the killer touch isn’t at all apparent.

To gee up their players, Radcliffe’s bonsai orchestra, now behind the club shop end goal, get amongst it once more with the loudhailer. Like I say though, it has precisely the same range as a plimsole-stuffed tannoy speaker at a decommissioned branch-line station. This does though make it competitive in the intelligibility stakes with the club’s own PA set up, a system best appreciated from the bottom left hand corner of the car park. In fact it probably beats the in-house kit, as I can at least make out the odd statement that crackles from the tiny megaphone. For example, “Get that number 5 off. What a dog. Woof woof.” 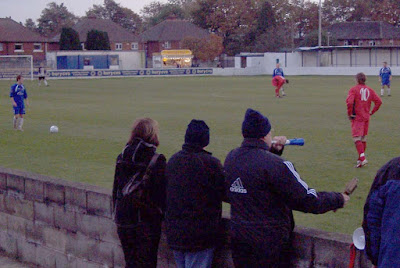 For the remainder of the game, as the Radcliffe sky turns to a foreboding purple and the odd premature firework sails toward it, the attacking pressure remains largely with the home side as they push Stamford deeper and deeper. However with hard-working Radcliffe players stretched, Stamford are able to launch the odd counter attack. The best chance, tough, is Radcliffe’s, as the impressive Lee Duffy races towards the edge of the box. Seeing the huge gap in the far corner, he sends in a pinpoint shot, only to see Ian Pledger swoop down to scoop it away. It falls, however, into the path of Heald but, under pressure from a defender, he can only knee it over the bar.

So, 45 minutes of momentum and endeavour ultimately aren’t enough to rescue Radcliffe from their slack ten minutes in the first quarter of the game, and depart the competition as they every other, at the first hurdle. The second half would suggest that ennui in the legs was not to blame and they’ll probably now tell you that this blessing allows them to concentrate on the league. Currently occupying a relegation position, they will need to give it their urgent, and upmost, attention.

Oh, if only you had done some homework on the Boro' and the FA Trophy!!!! ah well what can we expect from a bunch of "Southern Softies"

If the tie had been reversed, we would have taken a few more than the "coffin dodgers" that graced the Inn2gether Stadium, we really should have had the match sponsored by funeral director, he would have picked up a stack of prospective customers from the Stamford contingent.

I must admit to being surprised at finding this blog, as by the look of the Stamford web site, the Internet has only just found this part of the country.... Moonfruit I ask you!!! (It only costs around a tenner to get a proper domain name, but it looks like nobody can be bothered) what is all that about. With a forum with one post every month or so, is that just to keep it active, before they close it down due to lack of interest.
More to follow

Erm, are you under the impression I'm a Stamford fan. Not so.

You have a very nice blog.

I was looking for cheap domain names and found them as cheap as $1.99. You can check it out at yahoo domain names