A rugby town and certainly a utilitarian town, won’t you join me on a day out to Castleford? Far from one of Yorkshire’s most picturesque places, the sides and centre of the pedestrian precinct are lined mostly with tarpaulin-covered market stalls and pound shops. A squatting Christmas store selling nothing but yuletide gear has overtaken one unit, and in the window stands a display of large, ropey mechanised tat so offensive, it might as well have been Allah’s naked arse rising upsettingly slowly out of the inflatable chimney, rather than a perky pink Santa. Quite the centrepiece for any front room this festive season, dig in chums. Stood next to it is five-feet of rubber globe, torturing a reindeer, snowman and a different Santa with never-ending flakes of snow. By comparison though it looks as classy, well frankly, it looks as classy as a dinner suit on a dirty dog.

There is also a Lords Mayors parade of charity shops, all twirling their altruistic batons between the Poundstretchers, while the bigger names are tucked away in the square parenthesis of a shopping centre that’s been glued onto the large indoor market. 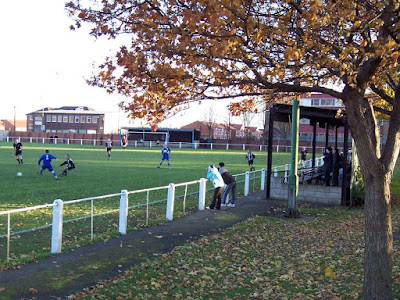 A mile outside Castleford is Glasshoughton and its centrepiece is contained on a roundabout. The Glasshoughton Wheel of Light commemorates the colliery and coke works from which the town itself grew. The giveaway is ‘Welfare’, if you see that in a football teams name, this usually pinpoints a history intertwined with that of the mining industry. It is certainly no surprise to find a Working Man’s Club directly opposite the ground.

As you’ll have spotted, today’s opposition wear their history equally vividly within their name, yet come from way over the Pennines, this being a Northern Counties East vs. North West Counties inter-league battle. Yes, another FA competition to amuse myself with, now that the H&’Dub are out the Cup. The Vase has been criminally ignored in comparison to the Trophy on these pages. For sure, I covered both legs [#1, #2] of last year’s Nantwich v Cammell Laird semi-final, but that merely highlighted how much of a glory hunter I had become. Even this ain’t the ground floor though, there having been three rounds prior to this.

Yet here we are, at the grass roots, albeit with most of them roots covered with a smattering of autumn leaves. These have dropped from the dinner-hall queue of trees that line the ground behind the dark stand that looks as though it has burnt down in the past week. Twice. At this level, you kind of expect that, and it fits in with the days-gone-by, vaguely socialist, working class atmosphere of the place. What doesn’t so much is the gleaming new community centre that houses the dressing rooms, the bar and possibly the occasional jumble sale. 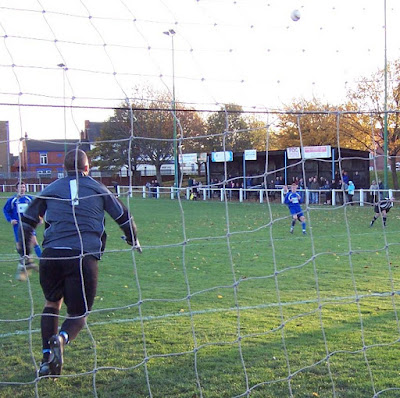 On the wall of the bar there’s a TV showing Scotland’s rugby encounter with the Pacific Islands but this is being largely ignored. Perhaps not such a hardcore rugby town after all then, although there are quite a few in here that pay no attention to the football that is about to start outside either.

They are perhaps wise to stay inside as a sharp wind has taken hold. It’s certainly a Yorkshire wind, quite laboured in its way, blowing the fallen leaves slowly across the rough pitch like an emphysemic bodybuilder pushing a bus.

As the game kicks off, it appears the home side have less to worry about in the opposition ranks as they have in their own, the lack of a call meaning one of the centre-backs poleaxes his right back with a high-leg clothesline, like a kid practising his karate moves on his timid cousin. Atherton capitalise on this early insecurity, taking pot shots from range but Glasshoughton’s stout keeper is content to flop upon them with heavy ease. Nevertheless it is the Lancashire side applying all the pressure, although suddenly, just as he’s almost completed his crossword and cream scone, the Atherton keeper has to make two sharp saves in a minute. He slaps away one stinger, while the other is jabbed directly upward with an arm motion similar to that which might be used by an exposed embezzler trying to escape a chasing pack of penniless investors by breaking through a painted shut skylight from below. 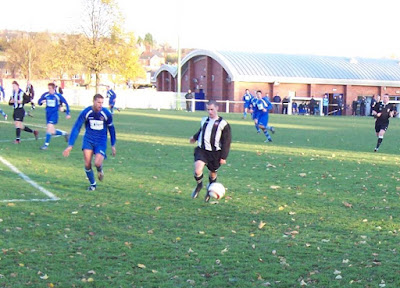 Half time is spent contemplating the home sides efforts to mop up the Atherton pressure on the flanks as well as the Glasshoughton player sporting a remarkable haircut that appears both braided like a ploughed field on the top yet as candyfloss fluffy as a Finnish mist at the sides and in between. Work in progress perhaps. Those things occupy me for so long from my, err, special seat, that I miss the first minute of the second half. It is during this minute that Glasshoughton score, or so I gather from the muffled cheer. It is clear that the team talk has been vigorous and effective, so much so that just a couple of minutes after the goal, Glasshoughton win a penalty, but Frightwig fires the kick wide.

It is the hour mark before Atherton re-impose themselves and they come within an inch of scoring. The striker and the keeper collide as the latter goes to catch and the ball bounces through his beckoning arms and towards the gaping net before a last-gasp foot clears it. Undeterred Atherton scramble in an equaliser from the resulting corner, turned in despite the presence of many a leg. They almost get a second a minute later as a lob beats the keeper but the bounce is such that the ball jumps over the bar.

Undeflated by this, Glasshoughton regain the lead a few minutes later. A cross is flicked on via a head and an outstretched foot directs it into the far corner. “What do you mean, ‘Fuck Off’?” asks an irate Atherton defender of his colleague, apparently discerning a grey area within the phrasing. 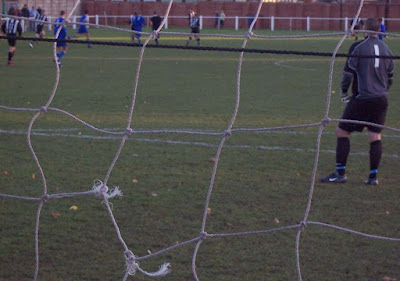 As the game draws to a close, Atherton have a number of chances to level but manage only to exasperate their small band of followers stood behind the goal. Thus Glasshoughton move one step closer to Wembley, despite having a fairly poor league campaign thus far, and with the floodlights switched off almost as soon as the last player enters the dressing rooms, they certainly won’t say no to the bit of extra cash that continued success in the Vase will bring.

So, Glasshoughton, well Castleford as a whole really, is a modest and old-fashioned kind of place. To fully round out the picture of this part of Yorkshire though, I should tell you about a page from today’s matchday programme. Above the advert for the Castleford & District funeral service is one for Houghton Pet Supplies, which uses its half page to market just its three most vital assets: “Free Delivery. Large Car Park. Pigeon Specialists.”

is it me, or are these reports becoming more Stuart Hall-esque every week?

and one of the best things about lower league football is that the lower the league, the fatter the keepers *

(* not actually a proven fact)

Between him and Henry Blofeld, I like to think there is a affectionate homage to the verbose eccentrics in sports journalism within these articles.

Whether that is a good thing or not is someone else's call.

let me assure you, it's a good thing.

I am a Southener who has lived in "CAS" for 27 years.The town has vastley improved since i first moved here-The Xscape and the Freeport are great,also Castleford Tigers are getting a new state of Art stadium soon and there are a lot of other major developments going on -See the Channel 4 programme at the end of the year/early
2009.Cas people do not watch Southern "Poofters" play Rugby Union (what about Newcastle,Sale etc)and are only interested in Rugby league.The Town centre is so so but there are too many takeaways and charity shops but this is the case with most town centres these days.The market has improved but Wakefield Councils Sky High Rates ensure that there are always a few empty stores.
I like Castleford but i don`t think i will retire here.