Not sure what it is about my relationship with the FA Cup but combine it, wiv me, and I appear to become a rainmaker the envy of many an Apache tribe. There was H&W’s exit at the hands of Cirencester in last year’s competition, which was wet on so very many levels. Then there was two weeks ago at Garforth, where pretty much everyone in the ground tried to fit on the back row of the stand as that was the only area beneath the ‘cover’ that afforded any shelter. I would have thought I might have been due a drying off period, but…

If anything the angle of the rain today in the Peaks was even more horizontal. Thankfully, the combination of a mighty wind in tandem with the fine, but incessant, drizzle along with the fact that the Silverlands ground is placed on a steep hill that winds up from the town centre means the game will go ahead. However, having held off to the last minute to make sure it wouldn’t be a wasted journey, there is not enough time to explore what is, I imagine, quite a handsome part of central England. Apparently I came here briefly whilst on holiday with my olds when I was on the cusp of my greasy teens, but I remember absolutely nuffin’ of it, although I believe I was in the midst of a faze of listening long and often to Ozzy Osbourne’s ‘Randy Rhoads Tribute’ live LP (on white, err…, cassette).

One trip I do remember is my only, thus far, visit to Atherstone in the West Midlands. The 1999/2000 season, my first season as an H&W supporter, finished with an away fixture at Atherstone United. I wasn’t, at that stage, a regular away-tripper, and indeed travelled up with two old chums and my girlfriend of the time, rather than in the company of the Hawk crew, whom I have come to know a lot better since. 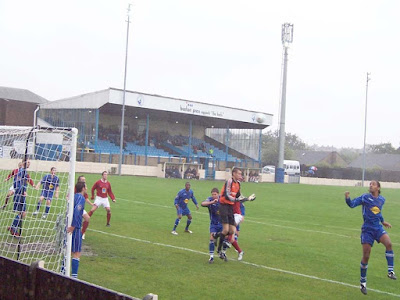 Plan had been for a long time that the last day away trip would be a fancy dress effort, ‘the 70’s’ being mooted as a theme. Keen to fit in, I pulled my mint green crushed velvet jacket out of the wardrobe. Not strictly 70’s, but with Showaddywaddy’s ‘Under The Moon Of Love’ having been adopted as our victory anthem during the course of that season, I thought it’d pass. I had been warned in the week prior to the game though that, despite the hype, not many would be going for it come the Saturday. Undeterred, I turned up in my garb, only to discover that ‘not any’ would have been a more accurate description of the general uptake. Still, I could have gone the whole Bootsy Collins/afro-wig hog, and as it happened H&W’s away shirts that season were a cheap, but vaguely shimmering, mint green, so not a complete disaster. A maverick then, albeit slightly awkward with it.

Not that many Atherstone fans were there to see it though, their team having already been relegated (and we’d have joined them but for two scrapping victories in the week prior). I wonder if any of the respectable gaggle of Atherstone fans here today might have borne witness to that, but then again a lot of water has floated under their bridge since then. I imagine the Southern League Premier days, punching above their weight really considering the size of the town itself, seem an awful long time ago. You may well have spotted by now that I am talking of an Atherstone United there, while Buxton’s opponents today are a ‘Town’, and therein, of course, lies a tale. Strictly speaking we are talking about two different clubs, United having gone into liquidation 3 years after my over-eager and over-dressed outing. However, a group of supporters managed to kick-start a new club to play at the Sheepy Road ground and laid claim to United’s history, United themselves having taken the baton from a previous, and again liquidated, ‘Town’ in 1979.

This Atherstone Town started in the Midland Combination Division One in 2004, earning promotion in both of their first two seasons to the Midland Alliance. Today’s game represented a chance for this successful Adders side to test themselves against Buxton, newly promoted from the Northern Counties East league and currently sitting atop the Unibond Division One, one level above them. This season has been Buxton’s return to the Northern Premier League set-up after two successive bottom-place relegations in 1997 and 98 pushed them out after 25 years of service, and results thus far this season appear to show they are keen to leap back up as quickly as they faded away. Their crowds and their Silverlands home give them a good base for their ambitions, particularly with a pitch that is not easily saturated. 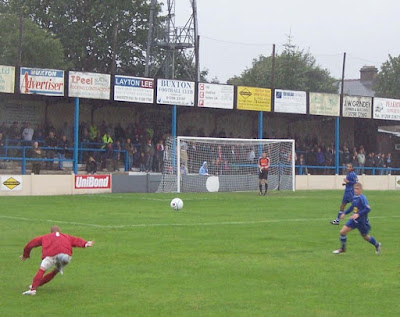 Despite that, with the rain slanting across courtesy the hectic breeze, the players take a good long while to be sure of their footing, an early Buxton corner slipping and blowing out before it even reaches the near post. At the other end Atherstone’s Danny Gaunt is asking plenty of questions of the right back Sean Hutchinson on the flank, or at least he would be if his regular experiments with gravity didn’t suggest that he’s playing in tap shoes, on a glacier. [see photo]

In the middle of the pitch, a stray Kwik Save carry-bag perfects its own graceful American Beauty homage, curbing its understandable natural urge to grip onto a passing face like a frightened cat. Outside of its unpredictable flow, the slipping and sliding has made it less of a football match and more a happy hour rebirth of ‘Double Dare’ (one for the 80’s kids there, and incidentally, whatever happened to Peter Simon?)

It takes about quarter of an hour for Atherstone to rid themselves of their Teflon soles and keep up with the home side, and the first great chance of the game goes to the Adders; Junior Hewitt threads the ball across the box and, amongst a load of bodies, Chris Partridge swipes his shot all around the ball as it trickles embarrassingly out beyond him. Hewitt tries to do better a couple of minutes later, a cool cushion header that appears about to drop into the far corner before Tommy Agus’ intervention. 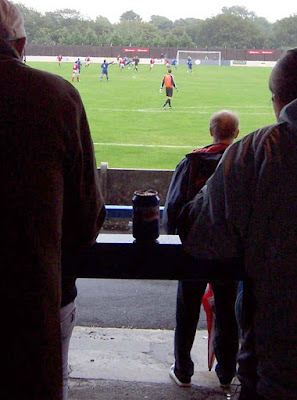 It is Buxton though, in the 37th minute, that take the lead. Shaun Doxey benefits from the ball bitch-slapping off of Leigh Everitt’s startled right cheek, to plant an exquisite shot into the top corner from 20 yards out. Proper slo-mo stuff too. Atherstone then up their tempo, breaking into the box twice in the following couple of minutes with, firstly, captain Craig Civzelis’ header grabbed a yard out by Buxton keeper Scott Hartley. Then Gaunt attempts a deft chip, but it settles in Hartley’s untroubled arms. “Keep the buggers out boy” gargles one curmudgeonly local, adding “load of bloody animals” like a sulky Alf Ramsey on a trip to the zoo.

Atherstone, as you might imagine, are keen to start the second period with gusto as the winner takes all here. ‘All’ being a grand and the opportunity to visit Tipton Town or Rushall Olympic. Indeed, Scott Hartley has to remain alert as they break inside the box twice in the opening minute of the half. Not long after, though, Buxton regain their sea legs and a lack-of-space-defying one-two between Aaron Brady and Adam Lee leaves the former free against keeper Richard Williams. The eventual shot though only requires Williams to tip the ball in the air as though celebrating a regulation slip-catch, and to gather it again on its way down.

As it becomes end to end, Atherstone force a corner, Stefan Beale’s in swinger catching on the air, allowing the gaggle of players in the 6 yard box to synchronise their watches before rising together, Hartley leaping above the lot to slap the ball against his own bar, and feel mightily relieved that it then goes behind. 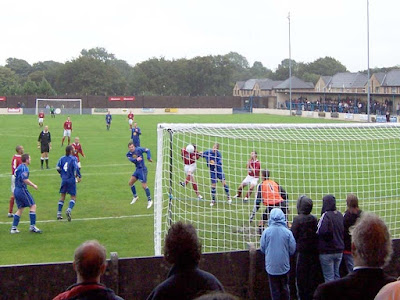 After 65 minutes, Buxton are tired of hanging around, Michael Tovey taking the ball into the far-left corner before delivering a great cross to the 6 yard line where sub Rob Ward has readied himself like a trigonometrically-aware catalogue model to guide the ball past the keeper with an expert skid off his balding pate. Five minutes later it may this time be Aaron Brady in that same corner, but it is nonetheless the exact same cross for the exact same result, Ward nodding in again, this time with more of a heavy pat off his lofty forehead.

A further five minutes later, Danny Gaunt collects on the left, and with the Buxton approach to goalscoring now almost a cliché, Atherstone try to emulate it themselves, successfully too, Chris Partridge side-footing in at the far post before grabbing the ball and escorting it back to the centre-circle in the attempt to redress the now two-goal deficit.

However Buxton respond in the most adequate manner, killing off any hope of an Atherstone revival, passing it around arrogantly before Tovey dances through challenges in the box to belt an effort into the far corner. 4-1. Job done. Next stop? Tipton Town, currently leading the Midland Combination. Buxton will certainly be wary of their threat based on Atherstone’s commendable efforts, but very confident of further progression.

Needless to say, barring more, and this time too much, rain, your Hobo will report from the first qualifying round in a fortnight’s time.

Peter Simon is now one of the hosts on Bid-Up TV.

Told you I'm a mine of useless information!!!