Everyone has their own ideas as to when the FA Cup starts. January, November, maybe September, but in truth no sooner is the season underway than we’re into the genuine kick-off point. With entries increasing year by year, even a preliminary round is not enough, and as such the Road to (hopefully) Wembley begins here with the Extra Preliminary contenders, still two victories away from the qualifying rounds, and six from the first round ‘proper’. That is not completely out of reach, of course, as Chasetown and Harrogate Railway have got themselves on the telly from a prelim start in recent memory. For most, it is a case of trying to accumulate as much prize money as possible. Today’s dangled carrot? A monkey in rolled up fivers, secreted away from Brian Barwick’s grooming budget.

Mind you, Garforth aren’t exactly short of a bob or two, or at least their owner isn’t. Simon Clifford probably wouldn’t notice if £500 fell out of his pocket, dropped onto his foot and broke his toe. He is a self made millionaire, football entrepreneur, a former primary school teacher who wormed his way into Juninho’s social circle by harassing his Dad at Middlesbrough games and becoming his unofficial PA. Taught by Juninho about Futebal de Salão, an indoor form of the game in Brazil that uses a heavier, but smaller ball that does not bounce, his interest grew to the extent that within three years he had had quit his job and set up the International Confederation of Futebal de Salão, and began running Brazilian Soccer Schools, with now over 600 franchises for these, and the SOCATOTS equivalent for toddlers, around the world. 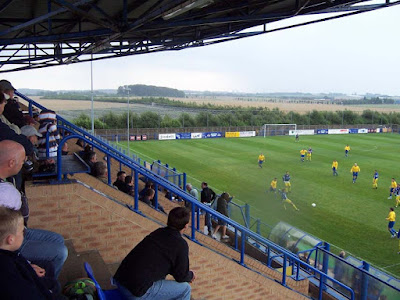 Simon Clifford, it is fair to say, is the most self-assured man since Canute the Dane started showing off to a group of beauty therapy students on his beach holiday. As he told journalist Alex Bellos, “In the last decade no one has done as much as me for the grassroots game in this country. People will be shocked with what I achieve.” He has major plans for Garforth Town too, having purchased the club in 2003, with the plan that the side will be the home of the best of the Futebal de Salão graduates as and when they get old enough. Some people in football have crashed and burned on 5 year plans, and even with his 25 year time frame, Clifford could perhaps be called overambitious.

The initial outlook seems vaguely realistic, with his idea that Garforth, with the graduates on board, will win the Conference by 2013. Being a Northern Counties East Division One side at the time of this claim, this would therefore be a sixth promotion in nine years, and two years down the line, they are one level closer to their goal. It is the next bit which might get people wiggling their fingers on their lips, as Clifford reckons it will then take only seven further years to ascend to the Premiership, with the title being theirs within the next eight. Well, we shall see. 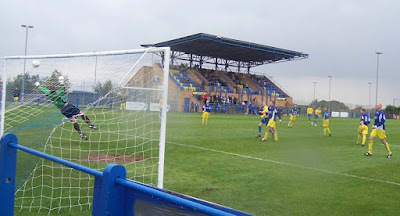 One thing you can’t take away from Clifford though is his ability to get people on board, notably his successful efforts to attract Socrates, Careca and, on a slightly more permanent basis, Lee Sharpe. All for publicity of course, and certainly very successful in the case of the Socrates: medical man, chain smoker and legend of the ’82 Brazil squad whose appearance, for a first class flight and a good dinner apparently, meant that Leeds Metropolitan University were able to award him an honorary doctorate, presumably for services to freezing his c*** off on a bench just outside the city, while he was around. As it happened, that same day was when I had to don the ol’ mortarboard at Leeds Met to be confirmed as a ‘Master of Science’. Anyone who was at school with me and remembers my questionable dexterity with a Bunsen burner will know just how ludicrous a concept that is but still, I graduated with Socrates, and you can’t take that away from me, even if a thorough exam paper audit one day might.

Anyway, like I say these pro/celebrity appearances certainly can’t have hurt Garforth’s financial programme, which they’ll need to get a League standard ground. At the minute it’s one handsome stand and social facility, a couple of small Futebal de Salão courts either side of it and f***-all else. Pretty good for the NCEL, but will limit their ambitions even in the short-term. Indeed, his efforts have even seen Lego throw their entire advertising budget at his ventures. Certainly suggests young Simon, well he's still only 33, is a charismatic individual.

However with charisma often comes over-confidence and he certainly managed to rub Dave Bassett and several senior Southampton players up the wrong way in his brief spell at the New Delli as head of sports science beneath his line manager, rugby’s famous Sir Clive Woodward. As a result, he was gone even before Redknapp decided to quit the only football management job ever taken for reasons of spite alone. 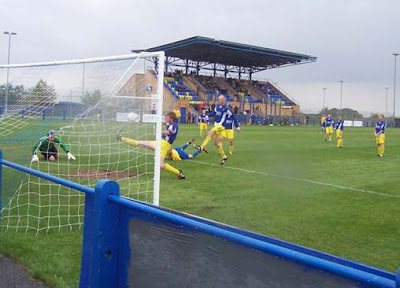 As a result he now has more time to devote to the Garforth project, indeed it was not long after he assumed ownership that he took on the management of the club, currently assisted by Vernol Blair and Steve Nichol, who take their place on the touchline, while Clifford spends the first half wandering up, down and across the stand, trying out a variety of vantage points, like an OCD-afflicted Where’s Wally trying to straighten a picture frame.

Although he may appear to be ambling like someone trying to retrace their steps on pursuit of a lost watch, he must be doing something right, as his team take the lead in the first five minutes, Penrith keeper James Holland aiming a limp punch at a floated free-kick, the ball dropping to Shane Kelsey who dances through prostrate bodies to slot the ball home with ease.

Five minutes later, another Garforth free-kick causes trouble, Holland tipping onto the bar (see photo) and Kelsey’s follow up header bringing a last ditch clearance as the ball bobbled towards an open goal. There is brief uproar in the stand on the half-hour, as the ref stops play to award a free-kick to Penrith due to a Garforth player coming back on the field after an injury to take a pass. “You waved him on” is the vociferous shout, in a variety of pitches and tones, and indeed he had, one indignant child shouting, pretty accurately, “you forgetful old man.” Still, it’s not long before they’ve forgotten all about it, as Garforth were awarded a penalty. Penrith’s Martin Kirkby, having thus far displayed all the speed of a burnt out chassis of a 1979 Austin Allegro, manages to finally get back to his own box but manages only to pole-axe Brett Renshaw. Kelsey steps up and scuffs it down the middle, but with Holland committed to a left-ward leap, the ball trickles in. During the second half it becomes increasingly clear that Penrith have only late-tackling in their arsenal but this eventually beats Garforth into a semi-submission where they don’t add any more goals in keeping with their dominance. However they do manage one final close chance as Andy Rowan beats the offside, takes the ball to the byline and delivers a cross, from which Ben Small’s triple-jump header crashes back off the post.

No more goals, but Garforth’s fans appear more than happy with what they have seen. “What do want?”. “Five hundred quid”. “When do we want it?”. “Now”. So sing the happy hardcore of about eight stood on the shallow terrace in front of the stand assuming, it would appear, that FA prize money is given to the more vocal supporters for a quality beer night. Prior to that, a rhetorical signal of “Can I feel an ‘Amarillo’ coming on?” from one of their number merely highlights that whatever radar properties are in his water are slightly off today, and we are spared their version of the only song John Motson has apparently ever heard of. Still, they get their five hundred sheets, and a home tie with former Conference side Chorley, as not long after the jolly boys’ request for financial assistance, the final whistle blows.

Really interesting - I've been meaning to catch Garforth this season, really just for the sake of catching Clifford in action.

Worth noting also that two of his proteges, Micah Richards and Theo Walcott, are now pretty much established in the Prem. Richards passed through Clifford's Brazilian soccer scheme, and Walcott worked under him at St Mary's.

Woodward and Clifford vs. messrs Redknapp and Bassett at Soton must count as one of the truly great culture clashes in modern English football. Oh, to have been a fly on the wall...