Welcome to a new hobo season ladies and gents. You’ll have to excuse this campaign’s opening sketch, as this game was squeezed in during yet another hectic Edinburgh Fringe show schedule, and as a result I don’t feel I really got to know the town of Stenhousemuir or, indeed, neighbouring Larbert. I like to think I have a decent excuse, though, for not getting there early enough. See, I was trapped in a performance of Hamlet. A Hamlet that was staged entirely on a bouncy castle. Believe me, like Chelsea winning the Premier League, the novelty soon wears off.

Tactically, I realise it was a mistake to sit on the opposite side of the venue to the exit door, on the wall end of a row that then filled up with five other mug punters. Wouldn’t have been so bad if the only exit strategy available didn’t require clambering over four steep rows of chairs and then a quick bounce past an angry Laertes. 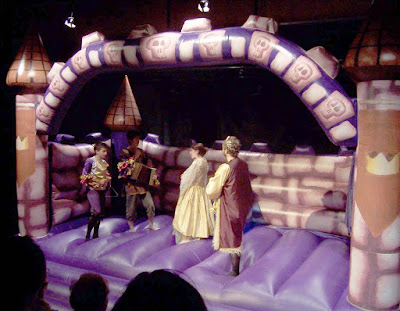 Still, I think its fair to say that most of us in the audience were there through curiosity or just to be able to say we’d seen the Bard done on inflated rubber. Certainly, if you were an aficionado, the lead actors many forgotten lines, the drowning out of the speech by the generator and the appearance of a blow-up sex doll in the role of the old King’s ghost, may have been quite the disappointment. Thank Christ for that doll though (well, and the chap in charge of supplying its voice), for getting us through the Prince of Denmark’s many dry moments with some very nice ad-libs. Problem is, and I blame the directors, they didn’t really know whether they wanted to put on a serious rendition, or the ramshackle farce it descended into. This will be a similar scene to one Montrose fans have been familiar with of late.

Now, one thing you should know about me is that when it comes to football teams, I have more soft spots than an armadillo’s underbelly. If I find myself in front of a vide-printer, I will likely have a mostly unclear interest in pretty much every result that comes through. Some people do the 92 by visiting all the league grounds. I do it by establishing a vague association with clubs throughout the world. Go Slavoj Cesky Krumlov. Go Pontypridd. And go Montrose.

My interest in a club representing a town I’ve not only never visited but also never gone anywhere near is simply thanks to Gable End Graffiti, a blog I’ve plugged often on this site for the sheer quality of the writing. Indeed, Steeplejack (who be the scribbler) has just this week published a vigorous polemic on the proposed second tier for the Scottish Premier League and what the means for clubs like Montrose, who have kicked around the lower tiers, usually the lowest, of Scottish football since entering the league in 1929. Not only a recommendation, but a very necessary read. As a result of work such as this, it has come to the point where I have even been known to let out a “yes” under my breath in club bars when a positive final score from Scots Div 3 comes through. Not that I’ve had much cause for that. 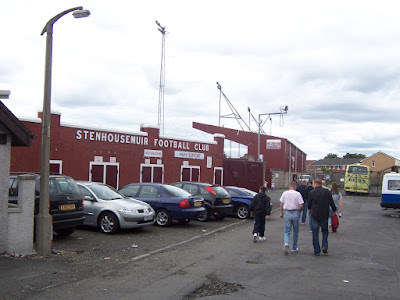 This is what I’ve gathered from GEG over the last year or so. Last season was a pretty poor campaign, but things appeared to look up with the appointment of a young, forward-thinking coach, Eddie Wolecki, from his position at junior league side Lochee United. However, with not much room to manoeuvre transfer-wise, the season pretty much fizzled out early. During the close season, all sorts went on at Links Park, with some of Wolecki’s coaching staff laid off, not to mention the parachuting in of a co-manager, David Robertson. Meanwhile, Montrose players are apparently training in small groups in Aberdeen, Glasgow and Dundee. Always good for team-spirit.

So, with Wolecki having both supporters and detractors amongst the fans and, it appears, in the boardroom, Montrose find themselves in some kind of limbo state, between paths. The on-field performance here at Ochilview gives as much away, looking wetter than a sunken Rich Tea in an ‘I Love Kittens’ mug. Stenhousemuir, by contrast, look strong and organised from the get-go, particularly Mark Cowan performing a Kilcline-like role at the back, wearing a plaster on his eyebrow like Nelly giving his grazed-face-chic a piratey spin.

That said, it takes the home side a fair while to get going themselves, for the first half hour the most interesting action, for those of us sat in the one open side of the ground, comes from the wisps of soot-like substance ploofing knee-high-wards anytime a ball or foot comes into contact with Ochilview's newly-laid FIFA 2-star standard artificial surface. The first real moment of danger for the Gable Endies comes when David Murie sends a floating shot from outside box just wide of the far post, keeper Andy Reid’s silent-movie backward-stumble suggesting a scampish apparition had knelt down behind him, for giggles like. When Stenny’s opener comes ten minutes later, it is Reid’s special awareness again that features, as his punch comes a little too late, Gareth Hutchinson meeting Kevin Mcleish’s corner before the fist, with the ball dropping in like a punctured lung. “1-0 to the Warriors” sings one home fan, stumbling after the numbers, as it becomes clear he is to remain unaccompanied in chant, but gamely finishes his line. 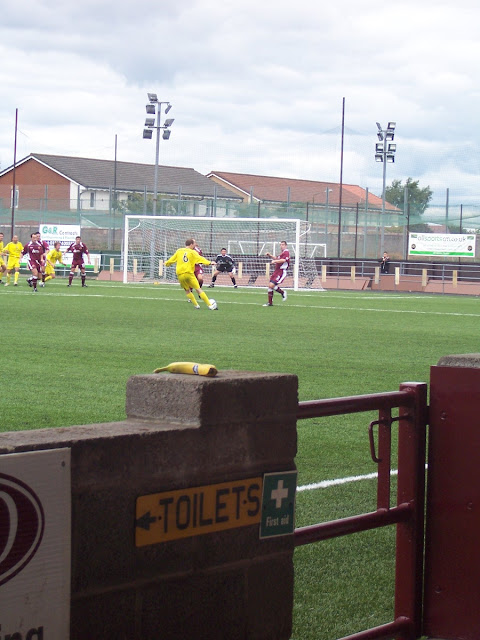 Not long after, Chris McLeod follows the high back spin of the ball like it’s an errant fete balloon and is easily robbed by Stenny’s John Baird, who backheels to shiny imp Brian McLaughlin, whose subsequent cross-shot deflects to Paul Murphy, who thunders just past the far post.

The first half finishes with Montrose just about having soaked up the pressure, despite an apparently unfit and out of position trialist (Jered Stirling) at centre-half; a profound lackadaisicality in midfield and precious little thought towards any up field momentum. Apart from that, all good. However it is only four minutes after the interval that Stenny increase their lead, easily breaching the Montrose defence, Hutchinson having plenty of time to steady himself two feet from the by-line and shoot just inside the opposite post.

This briefly enlivens Montrose, Paul Walker unleashing a shot, albeit straight at keeper Willie McCulloch. On the hour though, Stenhousemuir put all thoughts of a Montrose comeback to bed, John Baird receiving on the edge of the box, swivelling and curving the ball into the top corner. By this stage the Montrose defence are looking about as alert as a koala, seven hours into a ‘My Hero’ DVD marathon, and it is no surprise that they ship another within a couple of minutes, Baird scoring again, despite looking significantly offside, before going one-on-one with Reid and arrogantly slotting the ball in the narrow near-side gap. “Absolute joke linesman” is the indignant shout from the travelling support. 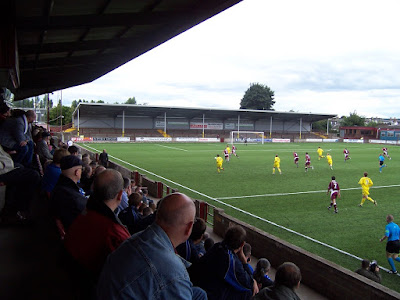 Ten minutes later, Montrose’s afternoon takes another turn for the worse as after David Templeton sends a high lobbed pass into the centre, he is clattered by a flying, committed Reid, the ref blowing for a penalty before Ian Diack heads the ball into the empty net. Reid is necessarily tunnelled, sub keeper John Farquhar replaces the effectively redundant striker Scott Michie, and is immediately beaten by Kevin Mcleish’s spot-kick.

And that’s how it finishes. Not exactly a lucky charm for my abstractedly adopted Scottish side am I? A Montrose supporter bellows “get it sorted” as the beleaguered Wolecki saunters past, and it is clear that the club need to get their house in order on and off the pitch, if they are not to spend the season playing pass-the-suspiciously-wooden-spoon-shaped-parcel with East Stirling and Elgin.

Perhaps an early season gubbing was just what the doctor ordered, as Montrose’s following results were both 2-0 victories over the Fishy Jailers and Hellgin Academy Sixth Form.

Mmm, think I may have been reading GEG a bit too avidly.

Curses skif! I can't believe you went to this game and I didn't meet you.

I hope you'll be up at LP later in the season. Back in the UK next week.

Thanks for the match report which I shall link to on the blog- a depressingly familiar story from Ochilview, I'm afraid, where we never seem to do v. well. last three games: P3 w 0 d 0 L 3 f 3 a 16 pts 0

Don't worry about being a bad luck charm, then!

Aye, shame my Edinburgh trip and conveniently located Montrose away game coincided with your Estonia trip.

Maybe next summer. Money too tight to warrant any more trips to Scotland this season. :-(