Day 2:
‘Uncle’ Peter leaves his seat for about the eight time today. As he makes his way to the staircase down to the concession stands and lavatories, he is saluted with “Peeeeeeeteeeerrrr, Peeeeeteeeerrrrr”. For the eighth time today. What makes Uncle Peter so popular here? Perhaps it is the fact he is clad in what one must assume to be his wife’s coffee-morning best, as well as a wig and a rather fetching hat.

This being the traditional fancy dress Saturday at the Test, this get-up is perhaps to be expected, but Peeeeeeteeeerrrrr has the in-built trump card in these situations of being not only in female get up, but also in being both a pipe smoker and wearer of a frothy autumnal beard. Legend for the day, and that takes some doing when those supplying the as-clockwork laudation include the Cheeky Girls, Marilyn Monroe and all five Spices, with not a genuine breast between them.

The two vicars sat amongst this collection would, you might think, look down on such temporary gender-bending. Not a bit of it though. And I should know. I was one of them. Just over to our left, we have six blue-haired mermaids. Slightly nearer is a man in a heavy-duty support brace on his lower left limb to which he has attached a makeshift sign to indicate that he has come dressed as a leg-break. Approaching Uncle Peter levels of genius there, but not quite enough to nudge the veteran off top-spot. It could have been so different too. All it needed was for our clumsy (or over-committed) hero to add the kind of curly tobacco conduit that wouldn’t look out of place in a Sherlock Holmes silhouette to his orthopaedic ensemble. So close. He’ll be disappointed with that. 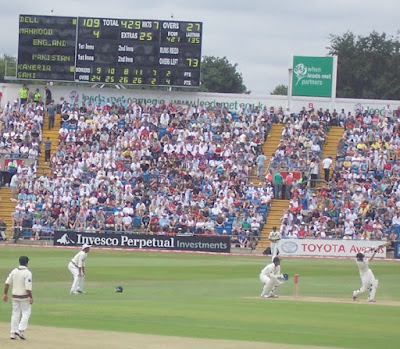 Over to our right is a collection of superheroes and, all told, it is a very high concentration of fancy dress in our little section. Remarkable when most of these groups clearly did not book together (what with not knowing each other and that), and also for the fact that we are in the traditionally sedate north-eastern curva of Headingley’s redeveloped seating. Well, traditionally sedate compared to the Western terrace anyhow, the usual home for outlandish costume, the Mexican wave starting pistol and many a soiled underpant, no doubt.

Our opposite numbers are not letting the side down however, with a cave-filling cordon of Fred Flintstones, a veritable cave-ceiling of Batmen (and just about the requisite amount of Robins), not to mention a couple of Daleks. Amongst this outbreak of gay sartorial abandon, a Test match occurs, and with England batting well on a helpful wicket, there is plenty to arrest the attention until the beer kicks in, or a Pakistani partnership builds, whichever comes the sooner. The days first successfully kick-started Mexican occurs well before Mohammed Yousuf and Younis Khan begin their record 3rd wicket partnership, so we can assume the former.

The spirits are high until those two begin to dig in, with Ian Bell reaching a third consecutive ton, Steve Harmison and Sajid Mahmood showing that England tails can still wag despite the bunny shooting gallery image Duncan Fletcher would like to have the Australians believe. Harmy particularly entertains with his usual 1-in-10 innings gung-ho thrashabout, and the mere glimpse of the tail of Monty’s patka peeking from beneath a batting helmet as he strides out last is enough to send the crowd into a frenzy. Mahmood’s cameo ends before Monty’s can really begin, but it’s another not out for the Field Marshall, who seems to be taking the back-door approach to a healthy batting average. 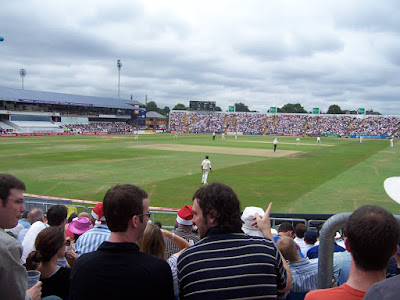 After a couple of early Pakistani wickets fall, including a run out courtesy some very alert fielding from Kevin Pietersen, the immovable object partnership grinds away, and doesn’t get anywhere close to the respect that it deserves as neighbouring sections compete in a beer-glass snake-off (which grabs umpire Billy Doctrove’s befuddled attention - see above; it’s his first Test in England as an Elite Panel ump so I imagine he’ll get used to it in time), and further Mexicans sees papers and beer holders flung airborn in the most extensive display of littering since the general strike. The only thing noisier than the myriad “Way-hays” emanating from the cheap, and not-quite-as-cheap seats, is the sound of Christopher Martin-Jenkins’ teeth grinding like a hammer mill.

There is also, apparently, consternation in the TMS box about fielders on the boundary taking time while the ball is dead to sign some autographs. The thing that strikes me most, though, is that autographs are collected on such ephemeral items these days. I used to race on before, and at close of, play with my mini-bats. These days, a bent and soggy nPower 4/6 card will suffice. No grandeur, no thought for preservation and display. Perhaps that’s the librarian in me speaking and is, I grant you, a bit harsh on the chap who manages to gather Saj Mahmood’s insignia on his prosthetic leg. He also manages to get Kevin Pietersen to add his name to his detached shin. KP appears unruffled by this, but seems bit more wary when he is requested to perform a similar task on the tyre of someone’s wheelchair. Press-ganging chants of “sign the wheel” eventually get their way.

At the close of the England innings, 515 looked a very decent total particularly after an early flounder at 110-3, but come the end of the day, the combined efforts of Yousuf and Younis make a “that’s not a knife…” style statement of total confidence. 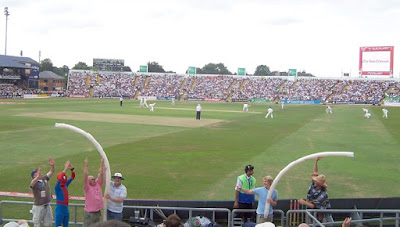 Day 3:
Sunday, as you might, expect, will always been the more sedate day of a Test matches weekend activity. There are still costumes, but not so many in number, and the Mexican waves peter out a lot more rapidly. Yesterday, one chap was seen at Leeds station wearing one of those Velcro t-shirts that allowed him to display Friday’s close of play score. I was hoping to find him to see if he had updated it for today and to discover whether or not he was doing a ball-by-ball update. Sadly, he was not to be found.

Pakistan began Sunday in very much the same way as they had finished Saturday, the two batsmen continuing to baffle the England pace bowling, while Monty Panesar patiently tied up the rugby stand end, his economy rate, consistency and accuracy a joy to behold in amongst a pretty tepid England bowling performance.

Pakistan seem to do alright by me. The one time I have seen them in a first class game prior to this was at Northlands Road, Southampton (now a housing estate), as they took on Hampshire in a tour match. I went for the first day of this, Pakistan batting first and throughout the day finishing on about 400-1, Javed Miandad and one of his colleagues both having retired bored. So it was with that same admiration and frustration that I watched here as the partnership broke through the previous 3rd wicket best of 180 (Mudassar Nazar and Harron Rashid at Lahore in 77/78 just so you know) and beyond 300, seemingly eternal. To try and escape it for a while, after an unsuccessful attempt to head off a four, Alistair Cook throws himself into metal fence hidden behind the boundary hoardings. As the crowd gasp, and his team-mates begin to rush toward him, his head pops up from behind the advertising like a careless sentry scouting for marauding Jerry. As a result, Beardface has to wait to celebrate his 150. 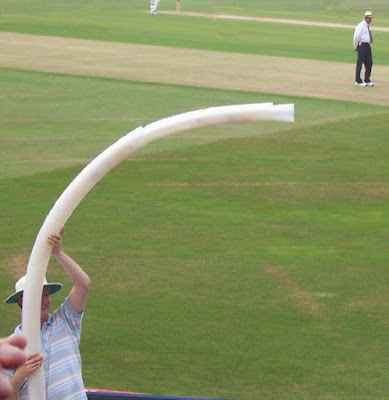 This gives the England performance an adrenaline shot, as Harmison then proceeds to deliver an over of more menace than anything the bowling attack could muster combined hitherto. Yousuf still crashes 2 boundaries off it, one streaky, one divine, but the step up in gears is noticeable. Eventually the crowd are able to leap off their feet at the fall of Yousuf’s wicket, and they remain standing to acknowledge a wonderful if understated innings. Not once did he go after the bowlers, but dominant he surely was, keeping the scoring rate deceptively high despite the lack of big hitting.

As the hysteria calmed down, it was evident that things weren’t going to get an easier as the Inzamam’s nonchalant gait brought him to the wicket. Indeed he rumbled out of the tunnel like a WWE super-villain, smacking two fours arrogantly off his first two balls. However, the seal had been broken in the Pakistan innings and soon Younis was run out, followed next ball by Faisal Iqbal who became Paul Collingwood’s first Test match victim. Despite the natural euphoria of Collingwood (Ginger Wildheart sans the pirate beard and dreads), this single wicket now means he also has a Test bowling average. And 216 don’t make for pretty reading.

For the remainder of the day, England’s attempts to arrest Pakistan’s development of a first innings lead make for fascinating viewing. With their gander up, and Monty’s doggedness eating away at the Pakistani tail, the wickets begin to tumble with comparative alacrity, despite several of their supposed bunnies reaching double figures. Inzi makes it to 26, before Monty causes one to rip into his well-dinnered tub. In an effort to fend it off, la Patata Grande pirouettes like a drugged rhino woken by the lick of the first flames from the spit on his back, barrelling over his own stumps in a fashion akin to a rusty, out-of-control combine harvester phut-phutting to an eventual stop. There is laughter. And lots of it. 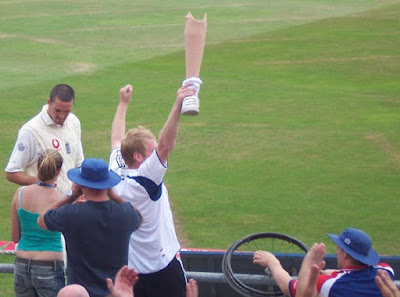 Pakistan eventually pull themselves up to a lead of 23, mainly thanks to a devilish effort at the end from Danish Kaneria who manages to welt Panesar for a six before the Mont has him caught at slip. It is not the only participation our new favourite finger spinner has in the fall of the final three wickets, he also removes Mohammed Sami, caught by Steve Harmison. In addition to that, Umar Gul's wicket is taken as he attempts to hook Sajid Mahmood. The ball skies high in the air and underneath it, at long leg, is Panesar. With the confidence that one has in a 3 year old in a similar situation, the collective intake of breath from the crowd appears to suck the ball into Monty’s hitherto hapless palms. It is a stunning catch regardless of his previous. Needless to say, the West Terrace, in front of whom it takes place, are quite pleased with it. Are you watching Duncan Fletcher?

Strauss and Trescothick see out the 3 remaining overs of the day with little trouble as so that's as much as I can tell you by first hand account.

England won though, just so you know.