I have often been confused by the St. Helens accent. As far away as Colwyn Bay, Scouse accents permeate. Here though, merely 20 minutes on the train from Lime Street, the average St. Helenian voice sounds akin to a number of antique hearth bellows being crushed in the back of a bin van. It is perhaps this which has led me to believe that St. Helens is a functional place, weighing up whether it’d rather be seen as a tiny bit rough or a fair bit Hovis.

Drab, but unthreatening rows of practical housing are, of course, present, but also a rather handsome Town Hall square, in bloom but not overtaken by floral display for the sake of it. Many of the names on the proud cenotaph are made strikingly vivid in the intense afternoon sun, while far to the side sits Queen Vic. She gets everywhere, that old girl. Here she perches like a Bond villain, balancing, possibly bouncing, an orb in her left palm with a face on that suggests said sphere is about to be welted at an under-butler’s insolent head. Which is how I like to remember our dead monarchs; edging towards the tyrannical but mischievous with it.

It appears though that there is a third way to view St. Helens. As we sweep in towards the station, we pass the glinting glass veneer of the new St. Mary’s Market building, beaming like a first time father handing out the Cubans. It’s not all modernism though, “Axe The Poll Tax” remaining whitewashed in two foot high letters on an embankment wall. 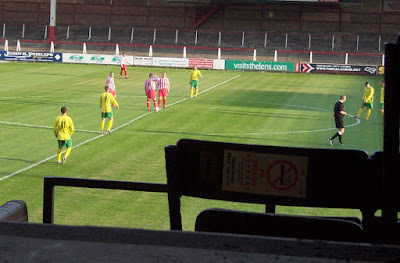 The town centre itself is virtually deserted as I pass through, possibly the new complex encompassing a cinema and several bars (Chicago Rock Café etc.) is the place to be, but I don’t come across that until the alternative route back. It is another sign, along with the work in progress on a new state-of-the-art ticket office and waiting lounge at St. Helens Central, that the people here are not content to sit idly by, watching enviously as Liverpool spends its regenerative millions in advance of the 2008 Capital of Culture action. Mind you, there is still room for Al-Capone Pizza; the hyphen suggesting the Chicago underworld of the 1930’s may have had their godfather connections not in Italy, but in the Middle East.

One thing you can say with accuracy about St. Helens is that it’s a rugby league town. Like at Leigh and Wakefield, the football club lives in the shadow of a much bigger team of peanut-backheelers, and have chosen to advertise that fact by allowing their small bunch of die-hards rattle around the same ground that’s used to holding thousands on summer Sunday afternoons. With Leigh though, the football club only recently rocked up there from Horwich when Bolton Wanderers built on their patch, while Wakefield were essentially a franchise club relocated from Emley (the Wakefield & Emley concessionary moniker didn’t last long, and an AFC Emley has now come into being at the original home).

St. Helens Town, however, have been knocking about since 1946, playing for half a century at Hoghton Road before ending up as tenants at Knowsley Road 5 years ago. Up to 1982 they played firstly in the Lancashire Combination then in the Cheshire County League, before becoming founder members of the North West Counties League Division One, and have remained there ever since. While in the 40’s, they could command decent crowds, partly thanks to former P.O.W. and neck-based legend Bert Trautmann, who played for Town after the war until moving to Manchester City at the end of the decade, nowadays turn-outs of around 80-100 are the norm, with the half of the ground afforded them still far more than they need. Mind you, FC United of Manchester visit on the first day of the coming season, so that’ll keep their officious stewards busy. I get warned by one of them to be discreet about taking pictures, as they don’t allow it at the rugby and ‘the club’ could chuck me out. This has happened once before at Blackpool and I can kind of understand that, as people might well be profiting on distant snap-shots of League One games by selling them direct to the Sunday papers. This game will likely be a money-spinner for me too. Ahem. 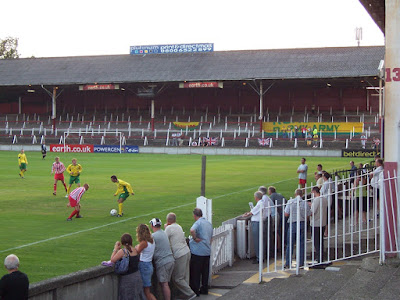 It would have been a shame if this game had gone unrecorded though, as this humble barbecue weather warm-up is the first ever game for Runcorn Linnets, formed by supporters of the now purgatoriant Runcorn FC Halton. With no cash to wind the club up, it will now float in the ether, what you might accurately now describe as a ‘non-league’ club. I was witness to the penultimate game in that clubs history, and watched as their loyal support clapping their ramshackle scratch XI off the field following a 7-0 defeat, one of many similar at that time. Come the end of the season, the camels back broken, they quickly mobilised and against the odds put together a more-than-sufficient business plan for acceptance into the North West Counties second division, some feat when less savvy types might have been forced to begin life in the lower reaches of the county leagues.

As it is, they have astutely kept loyal Runcorn FC manager Steve Carragher and some of the players that appeared in the calamitous final Unibond Premier season, while others have come from open trials held on the 29th of June. It is unsurprising then that with barely a month of group training under their belt that there should be clearly many areas for improvement required if they are to achieve their goal of a debut season promotion. The organisation of the defence will likely be an initial area of concern, St Helens two goals (Lee Dickson on 52 minutes, Michael Owens about 10 minutes later) making the most of the lack of understanding between the back four, as well as the lack of football in their legs. Questions may also be asked of the keepers. Two are tried out, one in each half, neither of whom look particularly comfortable with gathering either crosses or shots. The first half sees former Harrogate Town man George Caulfield between the sticks, coming back to the game after three years out following leg surgery. This may have involved both being removed as his size is so unimposing, it would take two of him to make a jockey.

Elsewhere, the Runcorn attacking players will also need to find a greater killer instinct amongst their collective shooting boots, as many an chance went untaken. However, that they should have had so many golden opportunities does highlight the fact that a two-to-nothing defeat fails to indicate the many positives to be taken from the Linnets debut fixture. David Thompson and Thomas Lamb up front look strong, rugged customers that will storm through many a NWCL Div 2 defence, while Andy McCoy on the right flank looks pacey, mischievous and potentially deadly. All their warm-up fixtures are against teams of higher standing, such as Cammell Laird and Rhyl, but while likely defeats may knock the confidence, they should learn a great deal and be more than ready for the challenges of their first season. 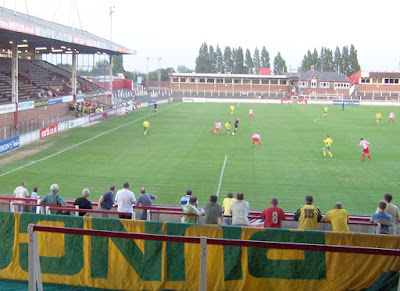 It is clear that their supporters are buoyed, as they make use of the space afforded them even in a half roped off Knowsley Road to display a gigantic flag, returning to action from their Conference and FA Trophy final hey-days. They spend a great deal of time shouting at each other in attempting to get it just so, balancing it over the rows of un-leant on crush barriers. Meanwhile several other flags, not seen when I’ve watched them either at Widnes or at Prescot also add yet more clashes of canary yellow and dark lime to the evenings glow, which swiftly turns to gloom as the home side try to save a bit of cash by not switching on the floodlights. Supporters, officials and the ref are united in giving it big eyes to make out the last five minutes.

Their lack of financial clout means St Helens will probably look to maintain their position in the North West Counties Division One this season, and make the most of FC United’s visit to improve the state of the coffers. For Runcorn Linnets, the only way now, really speaking, is up, and it doesn’t look such a pie-in-the-sky notion. The supporters are up for it, and even more will be if the club can eventually return to the town. Meanwhile the team look more than capable of improving to such a standard as to compete effectively in their division. After only 90 minutes as a club in action, and despite an opening defeat, Runcorn Linnets supporters can finally have something to smile about.