Since becoming an exile in 2003, I have greeted each season with a certain amount of optimism. That is in my nature. I should perhaps thank the Havant & Waterlooville players each season for selflessly preventing my expectations from raising too high, because from the moment I left, my first H&W game of each season spells certain defeat. 2003, lost 2-1 at Stafford. 2004, a 3-2 defeat at Basingstoke. 2005, Yeading away, 0-2.

Has this made me pragmatic? Have I become cynical? No, and never shall I lose my ability to slap a gauntlet in the face of empirical evidence. Particularly after our most exciting pre-season in years. A lucrative 3 year sponsorship deal with Carlsberg; several solid, quality signings with experience at the top level of semi-professional football; and a very good showing in front of 3,700 fans, beating a very high-class Portsmouth side 3-1.

So, all pretty tasty then. Well, the first week or two of the season saw a couple of defeats but since then the victories have been coming, and with Bedford hardly pulling up trees in their first season in Conference South, I made my way early from St Pancras with a spring in my step, the kind of spring that after a very relaxing stop beside on the embankment beside the river, saw me easily through the three miles to the New Eyrie, built after the reformation of the club in 1989, having been defunct for seven years.

Not that all lazing in the sun was all that Bedford had to offer. Being a kind of smaller sibling to the relatively nearby Cambridge, it’s a pleasant enough town, if possibly a little cramped. Today being market day, there is a gentle bustle. A few people shyly canvas for signatures to prevent a pole-dancing club coming to the high street, while next to them, a group in 16th century get-up should the kind of hot moves Bedford appears to prefer. Together they lock arms and do-se-do to a piccolo’s unobtrusive peep and a hurdy-gurdy that appears to mimic a wet duckling’s first, satisfying, postnatal fart. 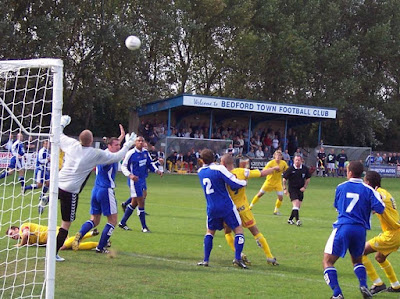 Despite the protests against the titty-bar, Bedford do appear fond of a bust. There’s a wee little effigy of anti-apartheid campaigner Archbishop Trevor Huddleston at the top of the precinct that makes him look oddly shrunken, like a retired jockey several hours after falling asleep in the bath, but the inscribed eulogic quote from Mandela make his memory stand taller than even a full statue could capture. Round the corner, on an alcove within the outer walls of the Corn Exchange is Glenn Miller’s little ‘ead, placed there apparently on the 50th anniversary of his disappearance, to commemorate the concerts he gave to the people of Bedford during the war, while stationed nearby.

Try as I might though, I can’t forever put off talking about the game. On joining the travellers from the south coast behind the goal, all seemed well. The atmosphere behind the goal remained good throughout, perhaps because those involved in the supporters club bus trip had not only a sweep on the first goal-scorer, but also a pass-the-bag-of-pound-coins-parcel thing going on, with each corner seeing the bag handed along. Furthermore, H&W were looking by far the better side, Rocky Baptiste holding the ball up marvellously, while a Brett Poate header on the half hour went over when, from 6 yards out, he really should have done better. Try as we might, the Bedford defence were proving a tough nut to crack, even though they didn’t appear to have anything up front to cause us too much concern. 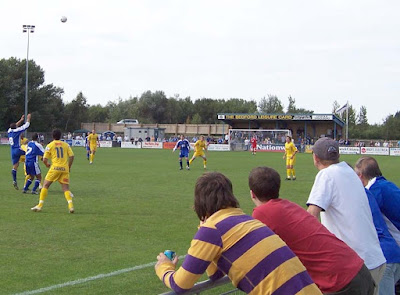 In the second half things largely remained the same; another glaring miss came, this time from Tom Jordan’s head. A couple of minutes after that, Bedford scored their first in a two-in-five-minute suckerpunch, both coming from recently introduced substitute Ian Draycott and both from defensive errors.

After that, Havant & Waterlooville looked to have no answers and appeared to have given up the ghost when, just as the game entered injury time our sub, barrel-chested (and barrel-arsed) Richard Pacquette, dug out the ball from between many a Bedford leg, flicked to Brett Poate who edged past Bedford keeper Steven Graham, to slot into the bottom corner. 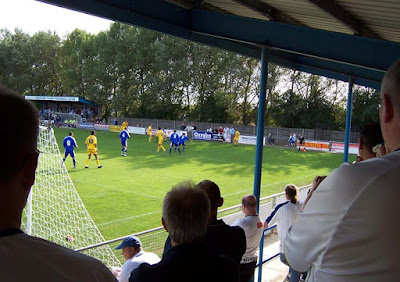 Reasons to be cheerful then? Well, one of our supporters won Bedford’s half-time draw. The same person then having to hand on the corner game wedge just before the final whistle was probably another reason, comically speaking. Indeed, despite the defeat, the behind the goal spirit remained pretty upbeat, possibly because it was fairly late on that we let our dominance slip. It is frustrating though, after a first half that we largely bossed, it looked odds on that there would be one winner, but two sharp uppercuts knocked the desire out of us, the second wind that did arrive coming much too late.

So, that spring in my step went on a typically early vacation, and the walk back to town felt a lot more than the three I thought it was on the way in. Such is the way when we’re partisan, and prone to disappointment, I guess.

I have managed Richard Pacquette in Championship Manager.

Wasn't he supposed to be genius when he was a bit younger?

Must have been rated then, played quite a few games for QPR early on I understand. I play a bit of Champ Manager now and then (usually while reviewing records), the version that starts in about 2000. Currently in 2012 and Pacquette's at Middlesboro and worth about £6 million.

Well, there's still time. Even if he's yet to really win over the fans of a fairly decent Conference South side.

"There’s a wee little effigy of anti-apartheid campaigner Archbishop Trevor Huddleston at the top of the precinct that makes him look oddly shrunken, like a retired jockey several hours after falling asleep in the bath" - look Skif, just give up this football malarkey and write the hilarious guided tour of British county towns you're clearly destined to write...