Recently, the Football Association of Wales’ decision to spend a £1.1 million UEFA grant on shiny new offices, rather than plough it into promotion of the much maligned and sparsely attended leagues under their jurisdiction, was met with heated criticism, and with some justification. However, those involved within the Welsh pyramid should surely by now be used to decision making that rarely ranks higher than a bored teenager ringing a doorbell and running off.

One early warning shot should have come in the first season of the League of Wales in 1992. Now, here was a newly formed national league in a relatively minor UEFA nation trying to separate its identity from big bro next door. Surely they would have done everything in their power to ensure all its founder clubs were ready to sparkle on the ‘big stage’, right? So you would have thought. As it turned out, after their first match at home to Inter Cardiff, Mold Alexandra were kicked out for failing to meet the ground criteria. In terms of their approach to emergency surgery, the FAW were clearly the bogus quack turning up to theatre with a canine kidney in a sandwich bag. It would be nice to think things have changed, but somewhere in South Wales, there’s a bulk invoice for new staplers and desk tidies that says different.

After hastily erecting a stand and some floodlights, Mold were re-admitted for the rest of the season, staying in the top flight until 1995. I would assume the stand built then is the one that remains today. One child spends most of today’s game climbing its skeletal, dilapidated frame, which is possibly a little unwise as you couldn’t dismiss the threat of imminent collapse with any confidence. 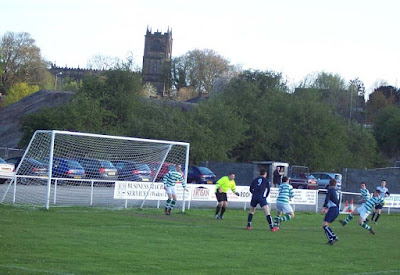 I would say the ground has seen better days, but not by much. Certainly, most of what once was a pristine ‘Mold Alex FC’ sign above the stand has slumped to the floor and although a previous version has been dusted off to plug the gap, some letters have yet to receive their invite to the new union while the ‘e’ has been the most dramatically squeezed out in an apparently hostile take-over. This haphazard truncation may well have been the result of vandalism and the perpetrators should probably be warned that the new arrangement now, essentially, reads DAL-X, and we know how vengeful they can be. It is certainly evident that the stand is put to use outside of football fixtures though, an oil drum bin next to it being topped up with about 20 empty cans of Carlsberg.

Since relegation from top flight, Mold have had quite a troublesome few years. After a further demotion from the Cymru Alliance in 1998, they looked into the possibility of a merger with Mostyn, but instead opted for relegation, expecting to be put back into the third tier Welsh National League that operates around the Wrexham area, that had been their home between 1947 and 1990. However having been placed in the Welsh Alliance League, and an appeal to the FAW voted down, they somewhat radically decided to turn their reserve team, currently playing in the lower reaches of the Wrexham area league, into the senior side so as to remain in their more geographically ideal strand of the Pyramid. A couple of promotions and a relegation later and they are back in their favoured 3rd tier berth in a division currently led by the side representing nearby satellite village Mynydd Isa.

Their ground may be quite rundown in appearance but you certainly can’t accuse them of not looking after the spectator. When you pay a mere quid for entrance and find the programme comes at no extra cost, you might not expect much from it, but it is certainly no fob off. The last fortnight’s league results may be the norm, but Mold supply the WNL Premier Division results for the entire season, as well as all the World Cup game schedules. Possibly the most startling thing about the publication though is the terrifying sketch of Lord Kitchener on page 7, ‘Your club needs you. NOW!’ written large beneath his demanding eyeballs and unyielding handlebar. 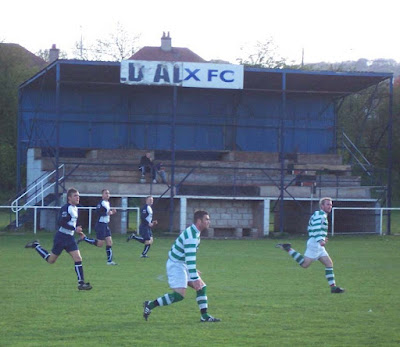 Elsewhere, they supply full page photographs of some of the players, each of which, rather ambitiously, contains a white box marked ‘autograph’. A further section is taken up with ‘Alex the Anorak and his amazing soccer stories’ while they also find room to advertise the on-site refreshment shed. “Visit the Colonels Café at Alyn Park, for tea or coffee – a cold drink, crisps or a choccy and possibly a hot dog”, they cumbersomely suggest, clearly believing we’ve been looking a little gaunt of late and need fattening up. As enticing as the Café’s cover-all-bases headline might be, it might need someone to tell them that their follow up line “it may seem like the Outer Limits or the Twilight Zone run by Basil Fawlty but it is worth a visit” could well undo all their good marketing work, however real the possibility of a hot-dog might be.

There’s dogs on the footballing menu as well, one panting young lad ambling about in front of the linesman on the far side on occasion in the first half. As the lino in question is the Mold assistant manager whose sole responsibility is to call for throw-ins, he shows precious little concern. Now I’ve heard people suggest that the Welsh Premier League is not much better than a pub league, which seems a little harsh on the decent pro's and semi-pro’s knocking about in the top-flight. However when only one official is available for an end of season 3rd tier game, and members of each bench are required to man the flags, while the ref takes the best guess approach on offside calls, you might think the ‘you-got-yer-team-out-the-boozer’ suggestion of teams at this level might not be so misleading, particularly when the Mold Alex pen-pics on their website make as much of their drinking capabilities as their footballing ones.

However lower-level players often belie their on-paper standard, a gorgeous one-two between two of the home-side’s midfielders almost leading to an early goal. They are certainly keen to test the Acrefair keeper, whose early handling suggests he is more frequent a spiller than a novice egg and spooner on a slackening high-wire, but they find his shot-stopping more than makes up for his Pietersen-esque shelling. 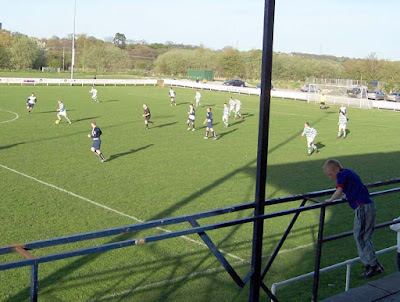 Suddenly, a mini-bike revs up behind the far goal, although the kid pouting beneath his crash helmet appears less impressed, folding his arms sulkily as his mother speeds off, like a drunken cowboy, into the distance. Not long after Mold open the scoring, their number 8 dribbling into the box, a last-ditch Acrefair tackle merely squeezing the ball to Dave Pitson who thumps home from 8 yards out.

This gets the Acrefair tempers rising, as a minute later, after a hard challenge, one of their defender’s wails “Fucking cheat. I’ll fucking have ‘im, he fucking took my fucking legs.” The ref responds sharply, “Quit moaning”. “Do something then” demands the troubled centre-back, the ref replying swiftly, “I will do, I’ll give a free-kick against you.” However our whingey friend does contribute something other than incessant carping to the game, as he later floats a visionary free-kick that drops in front of their 9 who lobs the keeper only to see it drop against the stanchion behind the goal.

In the second half, Mold start to assert their authority, bringing further errors from the Acrefair keeper, although he does enough to get behind one free-kick that appears slo-mo, collapsing on the ball so slowly it is more swoon than save. After dabbing at his eyebrows with a lace hankie, he welts the ball back into play. Soon after though he is picking the ball out of the back of the net again, Chris Boulton, the most impressive player on show, dances arrogantly through the defence, twisting and turning before slotting home on the angle. 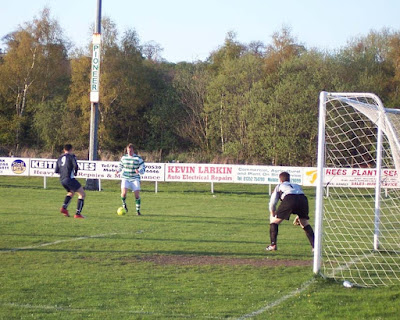 They make it three after 73 minutes, their no. 7 beating the offside trap (well one assumes) and having all the time in the world to draw the keeper and slide a pass to sub Wes Brereton who in clumsily tripping over the ball sends it bobbling over the line. Mold, seemingly unsatisfied with their goal threat at the correct end, attempt to score a spectacular one at the other, a centre-back’s header bringing a fingertip save from his goalkeeper, and while that is the last of the chances, there is still some more animal action, which seems a prerequisite for me this season.

Our dog from earlier, having worked out the pitch dimensions on his earlier stake-out, speeds directly along the half-way line like a daredevil amongst the legs of an, err, dogged midfield exchange. There’s a cheeky glint in his eye, this run clearly his way of thumbing his moist schnoz at the ‘No Dogs Allowed In This Ground’ sign in the car-park. Sadly, none of the players from either side cheer him through though, nor bat an eyelid, as they wind down the game on the balmiest evening of the year thus far.

There's only one Alexandra and that's in Crewe :)

Think that you will find that is factually incorrect.